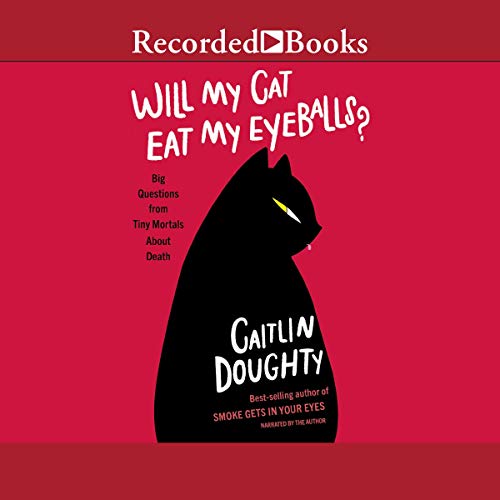 Will My Cat Eat My Eyeballs?

Listen in as Caitlin Doughty answers questions about death.

What would happen if you swallowed a bag of popcorn before you died and were cremated?
-0.00

Every day, funeral director Caitlin Doughty receives dozens of questions about death. The best questions come from kids. What would happen to an astronaut’s body if it were pushed out of a space shuttle? Do people poop when they die? Can Grandma have a Viking funeral?

In Will My Cat Eat My Eyeballs?, Doughty blends her mortician’s knowledge of the body and the intriguing history behind common misconceptions about corpses to offer factual, hilarious, and candid answers to 35 distinctive questions posed by her youngest fans. In her inimitable voice, Doughty details lore and science of what happens to, and inside, our bodies after we die. Why do corpses groan? What causes bodies to turn colors during decomposition? And why do hair and nails appear longer after death? Listeners will learn the best soil for mummifying your body, whether you can preserve your best friend’s skull as a keepsake, and what happens when you die on a plane.

Beautifully illustrated by Dianné Ruz, Will My Cat Eat My Eyeballs? shows us that death is science and art, and only by asking questions can we begin to embrace it.

"I adore Will My Cat Eat My Eyeballs?, and want to make it mandatory listening for anyone who wonders if kids are too young to be exposed to the concept of death. Author Caitlin Doughty shows how healthy and natural it is for young people to be curious about death, and that it doesn’t have to be sad or scary. As one of the world’s most renowned funeral directors, she gets asked a lot of questions on the topic, and it’s always the kids who ask the weirdest and most wonderful ones. In Will My Cat Eat My Eyeballs?, she sets out to answer some of them—from "Can I keep my parents’ skulls after they die?" to "What would happen if you swallowed a bag of popcorn before you died and were cremated?". Dressed up as an entertaining romp through an offbeat subculture—and yes, Doughty’s pitch perfect narration is hugely entertaining!—it’s secretly a guide for how to become more comfortable with something we’ll all inevitably have to face one day 💀." —Rachel S., Audible Editor

What listeners say about Will My Cat Eat My Eyeballs?

Will My Cat Eat My Eyeballs?

I have a serious problem with this book. It isn’t long enough! Only four hours? Really? In honesty I enjoy the writing and performance styles of Caitlin Doughty very much. I recommend her books to my friends all the time. This one does not disappoint and I must say our children have some very interesting questions.

As a hospice nurse, I love that someone is addressing these topics. This book has helped me answer many questions I have been asked by the smaller humans I come in contact with at my job. A++ and keep up the amazing work you do.

There is just something with Caitlin Doughty...

Ever since I became a subscriber to ''Ask a mortician'' on youtube I have dwelled into the massive library of videos she has uploaded over the years - and there is just something about her voice, her humor mixed together with facinating science about corpses and our culture, history and rituals around death that makes it so darn interesting to watch. Then, I listened to 'Death in the afternoon' and was HOOKED! Eventually catching up to date with the podcast episodes on my bikerides to work I was craving more DEATHFACTS and storytimes to listen to on my daily bikeride to work. And thank heavens - Caitlin had released her book in audioform! Now I have more fun deathfacts, science and philosophy about death and corpses that just fills my everyday. I realize this sounds absolutley ridiculous for a revew but... I think maybe that speaks for itself. You wont regret reading this book, and having Caitlin reading it makes it like a 4+ hour episode of ''Ask a mortician''! THANK YOU!

Another humorous look at the facts from our favorite mortician! Too much stigma surrounds the reality of death and it needs to be cleared away. You will come across some information you already know, especially if you have read her other two books; however this is definitely worth the listen! Many more new facts, and myth busts await!

A great listen for anyone curious

I have listened to this short but worthwhile book three times in the 24 hours I have owned it. The questions asked by children and answered by an expert writer and mortician are absolutely fascinating. I didn't realize that this was the same author of Smoke Gets In Your Eyes until starting to write this review. That book is also wonderful and challenged and changed many of my ideas about funerals and what I desire for myself when the time comes. I highly recommend both books.

Kids have written good questions that others have put into books before, which I appreciated. Mortician and author Caitlin Doughty cleverly took questions from her young followers and answered them for us. I particularly liked finding out what happens when someone dies in an airplane next to you while in flight. I loved the Audible version as Caitlin's voice tones and mannerism were delightful. If you want a few laughs about the topic of death, this book is a good one.

Like all of Caitlin Doughty's books, I just couldn't put it down. I love that she narrates the book herself. Death isn't something most people talk about and it's refreshing to have someone be so honest about it.

Great listen for the morbidly curious

If your feelings are tender because you've lost someone dear to, maybe postpone reading or listening. Otherwise, this book is fascinating and I learned a lot. I gave it four stars because towards the end, I felt like it was a bit predictable and repetitive (maybe the last five chapters or so?) but everything else I loved.

There is a reason this book is getting so many five-star ratings. It deserves the rating! I was thoroughly entertained and informed at the same time. The narrator (the author) has a perfect voice and comedic timing for this macabre humor. But, along with the humor, many myths are debunked. I learned a great deal of information in a fun manner, and I believe you will have the same experience. I intend to listen to this again. Soon!

I love Caitlin Dougherty so much !

she is fabulous Frank and funny. her honesty and humor is both informative and comforting on the subject of death I recommend to everyone and anyone all of her books. and recommend checking out her YouTube videos Ask a mortician.

Caitlin, is so funny and makes death a non taboo... With her charmingly funny attitude to death, this book takes the taboo of death and leaves you laughing instead of crying!...It leaves you knowing that we are all going to die...but in a good way, unless it’s not a good way!...In that case you will probably feature in her upcoming YouTube videos or her next book! ....Anyone with a fear of death, or questions about death should listen or read this to get over your fear of death.

I've been a long time follower of Caitlin on youtube ( ask a mortician ) so a book by her and read by her was an automatic buy. She's funny, informative and has a wonderful way of blending seriousness with quircky humour. An enourmously entertaing read.