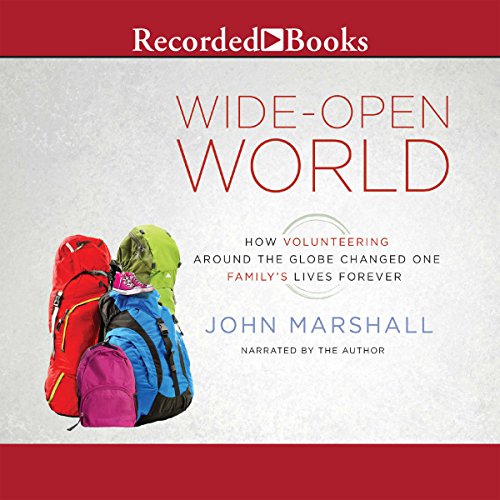 How Volunteering Around the Globe Changed One Family's Lives Forever
By: John Marshall
Narrated by: John Marshall
Length: 12 hrs and 4 mins
Categories: Travel & Tourism, Adventure Travel
4.5 out of 5 stars 4.3 (26 ratings)

His 20-year marriage was floundering. His two teenage kids were lost in cyberspace most of the time. He felt disconnected from his work, his family, his life. Which is when he had an idea: Let's volunteer our way around the world.

John Marshall had read about the growth of voluntourism, and frankly, it was the only kind of extended trip he could afford. He'd heard that some peoples' lives were changed by a week of overseas service - what might half a year accomplish for his family? His wife, Traca, was all in favor of it; his kids, especially his 14-year-old daughter, were strongly opposed.

Wide-Open World is the totally engaging, bluntly honest story of the Marshall family's life-changing adventure: six months of world travel, volunteering their way from Costa Rica to New Zealand to East Asia, how it went and what it led to. As Marshall discovered, he and his family did not change the world; the world changed them.

I enjoyed every minute

What made the experience of listening to Wide-Open World the most enjoyable?

This author has a gift for picking out moments in life that are really captivating. And his here-and-there tour of the world made for plenty of material. Some moments are about culture-shock, other moments are just about dealing with the bumpy road of life. Others have to do with the hard work of good relationships. In enjoyed of these moments, and I appreciated his polished narrative to the point of envy. I will probably gift this book to my sister at some point and also read it all over again myself.

it’s a memoir of the author’s quick jaunt around the 4 spots around the world , doesn’t do much and is limiting to the world of woofing , if you are interested in that then sure give it a read

Great concept! Great stories! when do we leave?!

Enjoyed the story and hearing of all the places this family went. Enjoyed the humor of the way the father told of it all. The information about how to practically pull this off was good and hopefully I can validate if it's really useful in planning my own trip someday.
I looked forward to listening each day to hear the next part of the story. I liked the way it was broken down. Maybe a little more imagery would have been nice but the stories did have enough detail to get me tearing up a few times at the emotion of this family and their experience. What an awesome concept to serve and show your children. what an experience for anyone at any age. No doubt this trip changed them all but for the kids what a gift from their parents... their minds and their hearts opened to so much more now.
I would love to take the advice and unplug and head out... and like he said there is never a perfect time so I just have to make my decision and go!

Listened to the book over two days . I really enjoyed the authentic and familiar family situations and expressions.