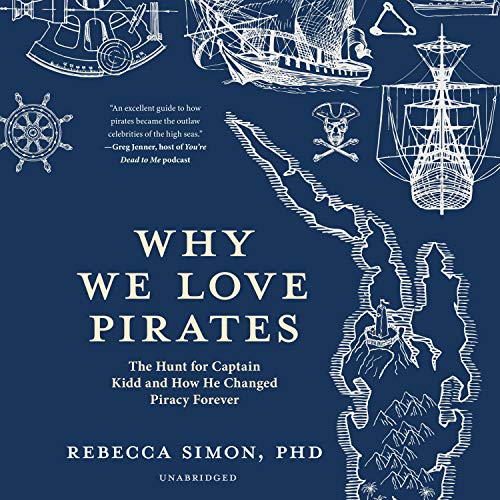 Why We Love Pirates

By: Rebecca Simon PhD
Narrated by: Kate Mulligan
Try for $0.00

During his life and even after his death, Captain William Kidd’s name was known around England and the American colonies. He was infamous for the very crime for which he was hanged, piracy. This book by Rebecca Simon dives into the details of the two-year manhunt for Captain Kidd and the events that ensued afterward. Captain Kidd was hanged in 1701, and from that sprung a massive hunt for all pirates led by the British during a period known as the Golden Age of Piracy. Ironically, public executions only led to pirates’ growth in popularity and interest. In addition, because the American colonies relied on pirates for smuggled goods such as spices, wines, and silks, they sought to protect pirates from being captured.

The more pirates were hunted and executed, the more people became supportive of them. They felt for the “Robin Hoods of the Sea” - both because they saw the British’s treatment of them as an injustice and because they treasured the goods that pirates brought to them. These historical events were pivotal in creating the portrayal of pirates as we know them today. They grew into romantic antiheroes - which ultimately led to characters like the mischievous but lovable Captain Jack Sparrow. Simon has presented her research on the history of pirates around the world, and now she’s bringing the spectacular story of Captain Kidd to her listeners.

What listeners say about Why We Love Pirates

Gracious, I think the author describes how pirates are hung in detail at least three times. There is interesting information but the repetitiveness of the material is overwhelming. The author is obviously trying to reach a word count. This is the type book that could be reduced to a few chapters and you wouldn’t miss a thing.

Gracious, this book is very repetitive...

Gracious, the author is so repetitive I thought the recording was repeating the same chapter over and over...

Sorry, am I repeating myself? I wanted to make a lengthy comment.

As the author of the pirate novel,"Black Hearts White Bones," I had to give Rebecca Simon's "Why We Love Pirates" a listen. Having spent countless hours researching the life and times of Anne Bonny and Mary Read, I wondered how her work would hold up to the breadth of knowledge I have acquired over the years. In short, I am greatly impressed and pleased. Impressed, because she has put more factual and relevant pirate history into one body of work than any other source I have come across. Pleased, because her research confirms the factual aspects of pirate history that are woven into my work of fiction.

Years ago, when I began writing BHWB, there were few credible sources to draw from. While factual information pertaining to Bonny and Read is still rare, Simon did an excellent job of cutting through the myths and legends and gives us the unvarnished facts...as she does with all the pirates covered in her nonfiction. And while my attention was focused on Bonny and Read -- understandably so -- Simon's body of work gives readers/listeners a tangible taste and feel for what it was like to be a pirate...any pirate, male or female. It is hard for me to estimate how much time I could have saved conducting research had "Why We Love Pirates" existed before I began writing my novel, but I know it would have been significant.

All of this is my way of saying that, everyone who loves the lore of pirates will want to make WWLP part of their library and an essential reference, not only regarding pirate history but for the pop culture associated with pirates today. Well done, Rebecca Simon (and Kate Mulligan for the excellent performance). If we ever meet, the first bottle of rum is on me!

NOT - Another Pirate Book.

I do love a good pirate story but many books on the topic have fallen short lately. This one DID NOT DISAPOINT. The fine explainations of pirate tales from the 'till now made it even better. As a product of the '80s - I related greatly. Performance was amazing as well. Thanks for the book Doc; looking forward to the next one.

An interesting take on the history of pirates from an anecdotal perspective.

I enjoyed this book and the narrator delivered in keeping the story engaging. That said, she did make it sound like an infomercial which took the shine off it. The historians sloppy research into the origins of pirates and performative prostration towards trendy historical revisionism was unnecessary and irritating. Nevertheless, this was an entertaining adventure.