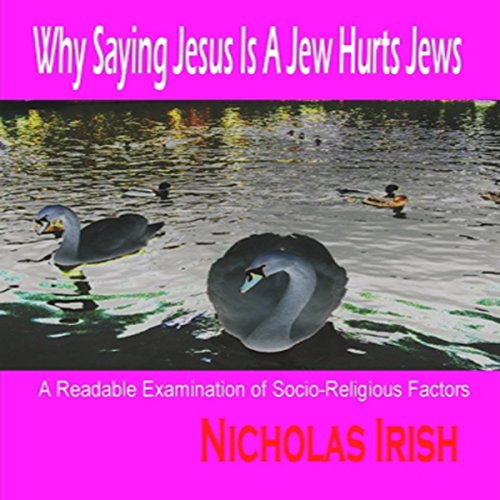 Why Saying Jesus Is a Jew Hurts Jews

Why Saying Jesus Is a Jew Hurts Jews

Does saying that Jesus Christ is a Jew hurt Jews and Jewish communities? This is the question that Nicholas Irish asks. Nicholas Irish's answer? Yes! Irish provides ample evidence from history, society, politics, religion, and sociology to show that saying that Jesus Christ is a Jew hurts Jews and Jewish communities. Irish argues that stating that Jesus Christ is a Jew will push historical processes such as the violent pogroms that Jews experienced in Russia and the Holocaust that Jews experienced in Europe. This audiobook is a must listen for Jews and non-Jews alike. It is insightful and very listenable. Even a person without any previous knowledge of Jewish history or Christianity can understand this audiobook after hearing it. This audiobook may well hold the key to Jewish survival for the 21st Century!

Repetitive, anti-Semitic. Of little actual content. Totally ignors the fact that Christianity is an bastard child of Judaism; and that Jesus was a Jew, born to a Jewish mother (father uncertain), grew-up in a Jewish home, and grew-up in a Jewish culture. The reason Saying Jesus Was A Jew is hated by christians is that they are delusional and, like all other Abrahamic Faiths, they are violently exclussionary to even other variants of their same religion.

'Christians are offended when Jews deny the divinity of Christ by saying that he was a Jew. And impudent Jews daring to offend Christians in this manner is directly responsible for all pogroms, expulsions and massacres, including the holocaust!'

That's literally all of that the author of this book has to say, taking the rest of the run-time to explain in ridiculously patronising detail why Christians are so offended! Actually having the audacity to pretend that he is trying to 'Protect' Jews by telling them to stay quiet for their own good when, no different from telling a gay man that it's his fault if he gets beaten up for being gay if he's always throwing it in people's faces, this is a form of terrorism by proxy; using the threat of violence committed by others to keep oppressed groups in their place!