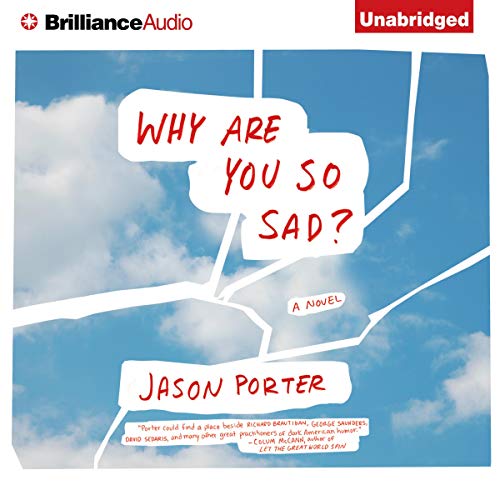 Why Are You So Sad?

Have we all sunken into a species-wide bout of clinical depression?

Porter's uproarious, intelligent debut centers on Raymond Champs, an illustrator of assembly manuals for a home furnishings corporation, who is charged with a huge task: to determine whether the world needs saving. It comes to him in the midst of a losing battle with insomnia - everybody he knows, and maybe everybody on the planet, is suffering from severe clinical depression. He's nearly certain something has gone wrong. A virus perhaps. It's in the water, or it's in the mosquitoes, or maybe in the ranch-flavored snack foods. And what if we are all too sad and dispirited to do anything about it? Obsessed as he becomes, Raymond composes an anonymous survey to submit to his unsuspecting coworkers. - "Are you who you want to be?," "Do you believe in life after death?," "Is today better than yesterday?" - because what Raymond needs is data. He needs to know if it can be proven. It's a big responsibility. People might not believe him. People, like his wife and his boss, might think he is losing his mind. But only because they are also losing their minds. Or are they?

"Like a well-stocked IKEA, Why Are You So Sad? Has everything you need for your home and your heart. Jason Porter has written an astute, intelligent, and hilarious book." (Gary Shteyngart, author of Super Sad True Love Story)

What listeners say about Why Are You So Sad?