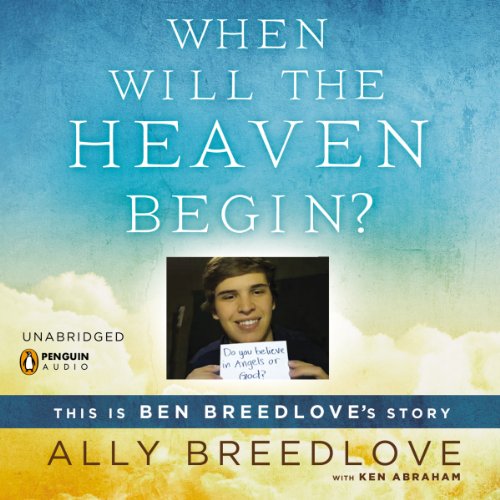 When Will the Heaven Begin?

By: Ally Breedlove,Ken Abraham
Narrated by: Ellen Archer
Try for $0.00

An inspirational and heartrending memoir about Ben Breedlove, whose videos about his near-death experiences and visions of heaven went viral in 2012, written by his sister Ally Breedlove.

On Christmas Day 2011, Ben Breedlove's soul went to heaven. But it wasn't his first time there. Ben suffered from hypertrophic cardiomyopathy (HCM), a heart condition that posed a constant risk of sudden death. His condition, a thickening of the heart muscle, worsened over time, leaving him weak and fatigued. It also led Ben to some close calls medically, in particular cardiac arrest on four separate occasions, during which he felt the presence of angels and experienced the perfect peace of heaven.

Precocious and warm, Ben was close with his family and two siblings, and forged deep relationships with his friends. He loved to wakeboard and wake surf, and he had dreams of visiting foreign countries around the world. He created the YouTube channels TotalRandomness512 and BreedloveTV, and co-created the channel OurAdvice4You, where he posted videos about everything from dating advice for girls to more serious topics like his spirituality and heart condition.

Unbeknownst to his parents and family, Ben created a two-part video called "This Is My Story," in which he used flashcards to tell the world about his near-death experiences and his beckoning toward heaven.

When he died a short while later, at the tender age of eighteen, his family and the rest of the world stumbled upon these videos. The world responded with overwhelming acceptance of the message Ben shared.

Sharing his vision of heaven was Ben's gift to his family, and to the world. And now this is the Breedlove family's gift to us - an in-depth look at the life and near-deaths of Ben, the strength and faith of a family, and ultimately, the hope of heaven.

Do you believe in Angels or God? I do.

What listeners say about When Will the Heaven Begin?

From the start to the end of this book, i could not put it down. I first red about Bens and Ali’s story in a book called Imagine Heaven. It was so beautifully written, i felt like i knew his family. I would say that anyone should read this book but you will need to have Kleenex ready.

Choosing the End: knowing the outcome.

Knowing this would end with his death early did not remove the touching emotions from this story.

Great story from a wonderful family

What did you love best about When Will the Heaven Begin??

The story of Ben's life is told in such a way that you begin to feel that you know Ben even if you (as I) never met him. The story's being told from the point of view of his sister creates a relational aspect that is unusual, but pleasant.

Which character – as performed by Ellen Archer – was your favorite?

If you want a real uplift, listen to this book !

What made the experience of listening to When Will the Heaven Begin? the most enjoyable?

Its about Heaven, and the great people who go there.

Ben or God ... ?? I can't decide. They both give plenty of Joy, and many good reasons for doing things the right way.

Its a bit long for that, also I looked forward to listening to it at the end of the day.