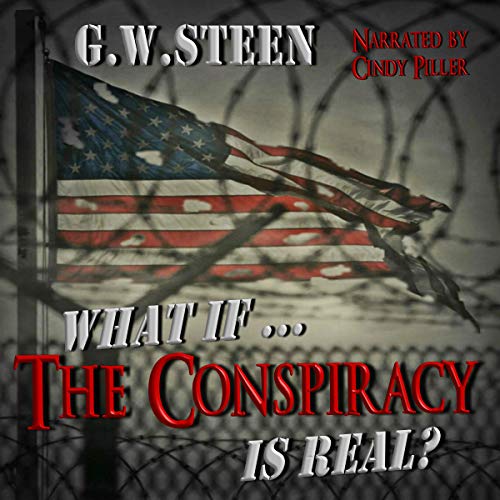 What If...the Conspiracy Is Real?

The conspiracy theories are hidden agendas.

Maggie Weiss, a vibrant, free-thinking, grown-up "child of the 60s", was an only child, born of German immigrant parents, and although inquisitive to the extreme, her heritage was never discussed. After graduation she applies to the University of Munich and is accepted. She heads to Europe; her goal, to study international journalism, but she is soon drawn to, and delves into, her family’s history. What she discovers sets her on a frightening and dangerous journey.

Many years come and go before Maggie decides to pen her life story. Soon realizing that the world now isn’t the one she grew up in, she wonders why so many have chosen to ignore the obvious. When an unfortunate accident changes her life forever, her confining disability leads her down a path of secrets, lies, and betrayal.

As she, along with her fellow journalist and companion, Jake Rigley, uncover a radical plan aimed at destroying the most powerful nation on earth, the growing evidence is quickly compiled.

Their days become more treacherous; they’re plagued with anonymous phone calls threatening bodily harm and multiple attempts to eliminate them by various other means. Yet, they ignore every warning; the irrefutable data they uncover proves, beyond any doubt, that the "so-called" conspiracies are more than just "theories", they’re indeed shocking fact.

Will anyone believe them? Will they survive or will they be silenced? Can the nightmarish outcome be prevented? Or, even worse, will history repeat itself?

What listeners say about What If...the Conspiracy Is Real?

This audiobook was very interesting... makes you think about what really is happening out there... narration was great and story line was as well..

I received this free review audiobook copy and have voluntarily left this review.

No spoilers here but let me just say you will be blown away by this conspiracy theory. Cindy Piller gives a wonderful performance and will leave you thinking about a lot by the ending. I don’t typically listen to this type of story because I get frightened pretty easily but Cindy is perfect for this book. She kept me interested and had great energy throughout the story and her voice distinguished between the characters well. Buckle up and get ready for a great listen!

I started out liking this book,expecting things to be explained.I felt like storylines were missing.We were told things that didn't matter.The characters needed a bit more fleshing out.I expected more. Narration was good.I was given this book by the narrator,author or publisher free for an honest review.

When I requested this book from the author (promising I would review it), I really didn't have any preconceived notion about it's content:. There are just too many conspiracies out there.
You do eventually learn which ones are being used and woven into the storyline, but they weren't explored in more detail. The characters were a little too "cardboard-y.". You get cursory descriptions and get enough to understand their roles, but I never felt like I was in their head experiencing what they were experiencing.
The narration was fine, not great, but fine. It didn't detract from the story, but it didn't add to the audiobook experience.

OK on the good side of the equation...the narration is reasonably solid.

The rest? I can't think of anything, at all, compelling about this hair-brained, through all the conspiracies including the kitchen sink dumpster fire of a book. It starts slowly, heats up with a less than believable series of "coincidences" and finishes, abruptly, with barely any plot resolution or character development. This is almost laughably bad in its utter weirdness.

For what is intended to be a book set in current day, flip phones ( which are constantly referenced ), zip top beer, is an example of poor editing. Spoiler alert..one of the main characters are extremely badly injured midway through, and apparently just carries on as if it were nothing but a cut knee.

Seriously, I cannot recommend this book. I was provided my copy, for free, by the author's representative, in exchange for this unbiased review.

What If...the Conspiracy Is Real?
Never reached its potential but still an entertaining read.
Narration by Cindy Piller is excellent and carried this book making it an easy listen.
I was given a free copy of this audiobook at my own request, and voluntarily leave this review.

This story was different than I thought it would be before I began reading it. It was a good story but it never did quite reach an apex. I kept waiting for something to happen and it didn't.

That aside, I can see how this could happen, maybe not to go unnoticed until the whole thing was upon us like in the book, but it could happen. I liked the characters but it just feels under developed.

I enjoyed this book and the general "conspiracy theory" was very believable, as I had already heard experts opinions on 9/11. The characters were likable. The main problems I had with this book is the fact that if the women knew in advanced, why weren't they better prepared? Why didn't they have food and water storage? Why didn't they have her fathers place already fixed up? After the "accident", why did they keep "going to the store" and going to get food, when they knew it was increasingly more dangerous? Why not get everything at once?
I was also not a huge fan of the ending, It was a cliff hanger. But all in all, I would recommend this book for anyone that is interested in conspiracy theories!
I was given this free review copy audiobook at my request and have voluntarily left this review.
Paula Wright

This is one of those books where you don't want to say much so that the next person can be floored by the conspiracies. It was a well written and very well performed book that will stick with me for a long time to come. I was given a free copy of this audio in return for an unbiased review.

We all do what we can and hope it turns out right.

An excellent idea for a book which, sadly, fails to fulfil it's potential. In fact, more than that: it seems to try to deliberately sabotage itself with lengthy and fairly irrelevant details which are delaying items, presumably to increase tension and stop the theory being too quickly shown but instead of simply annoying diversions.And whilst the 'theory ' itself has plausibility, the characters do not: hard to believe in a fifty two years old woman who has, along with other injuries, just broken her back in several places being able to sit in and manipulate a non power assisted wheelchair only days after her accident. There is a small sense of tension building in the early pages but, strangely, although half of the team are journalists, there are no attempts to inform others of their fears. Indeed, quite the opposite. This would have made an excellent short story or, with a lot more thought and editing, a great book. Instead it becomes more of an attempt to think of something else to fill the pages and extend the book, with a smidgen of horror thrown in.

My thanks to the rights holder who, at my request, freely gifted me a complimentary copy of What It ...The Conspiracy is Real? via Audiobook Boom. I had high expectations of this conspiracy thriller but it was not what I had expected and even the good narration of Cindy Pillar was insufficient to make up for the story's deficiencies. Sadly, I would not recommend this book to anyone.