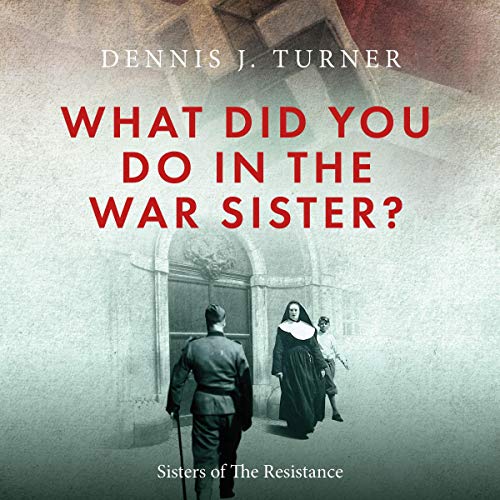 What Did You Do in the War, Sister?

The book is a fictional memoir based on actual events. The inspiration for the book came from hundreds of letters and other accounts written by Sisters of Notre Dame de Namur who were living in German-occupied Belgium and Italy during World War Two.

Turner created a composite character, Sister Christina, who is described as an Ohio farm girl who joined the Sisters of Our Lady of Namur to teach English and agricultural skills to young Catholic girls. Assigned to Belgium in 1939, she worked Nazi-occupied Belgium for the duration of World War Two. She and other Sisters of Our Lady of Namur in the Saint-Hubert Convent quickly learned that living their normal contemplative, disciplined lives was impossible in a country controlled by ruthless Nazis. Soon they were risking their lives by joining forces with the Belgian Resistance to hide refugees, Jews, and downed American pilots.

Sister Christina believed her ordeal was over in September of 1944, when American troops liberated Saint-Hubert. That hope was crushed when Saint-Hubert was recaptured by the German army during the Battle of the Bulge, forcing the sisters to revert to their tactics for survival and resistance until liberated for the second time.

What listeners say about What Did You Do in the War, Sister?

An Unusual View of the Holocaust

I particularly liked the different aspect of the Holocaust, as seen thru the eyes of a Nun. She is an American living and working at a Convent in Nazi occupied France. She and her Sister Nuns provided sanctuary to Allied pilots and Servicemen, in addition to Jews. The ingenuity of the Nuns is incredible. A great read!

It's okay - probably a better read than listen

My mom, and her 5 sisters, attended Sisters of Notre Dame de Namur High School in Chicago, Illinois. I am named "Julie" after St. Julie Billiart . I think this would be a better read b/c a reader could follow the footnotes and separate fact from fiction. I read a great deal of WWII non-fiction as well as historical fiction. I wouldn't put this in my top 10 list, but it was an enjoyable listen and fun to think that maybe my mom and her sisters were packing those boxes to be sent to Belgium.

The narrator/performance seemed to laden the performance with anxiety in her voice, but that approach lasted through out the book. Not my favorite.