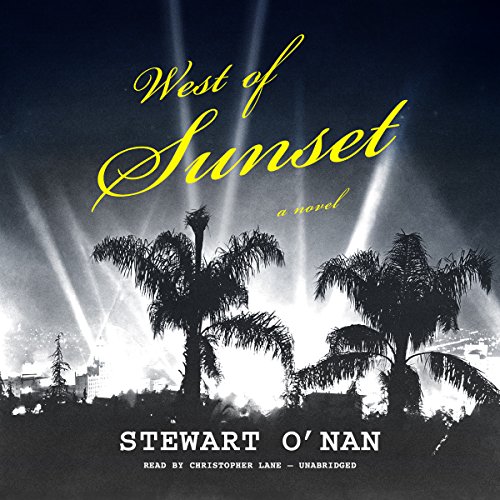 By: Stewart O'Nan
Narrated by: Christopher Lane
Try for $0.00

In 1937 F. Scott Fitzgerald was a troubled, uncertain man whose literary success was long over. In poor health, with his wife consigned to a mental asylum and his finances in ruins, he struggled to make a new start as a screenwriter in Hollywood. By December of 1940, he would be dead of a heart attack.

Those last three years of Fitzgerald's life, often obscured by the legend of his earlier Jazz Age glamour, are the focus of Stewart O'Nan's gorgeously and gracefully written novel. With flashbacks to key moments from Fitzgerald's past, the story follows him as he arrives on the MGM lot, falls in love with brassy gossip columnist Sheilah Graham, begins work on The Last Tycoon, and tries to maintain a semblance of family life with the absent Zelda and daughter Scottie.

Fitzgerald's orbit of literary fame and the golden age of Hollywood is brought vividly to life through the novel's romantic cast of characters, from Dorothy Parker and Ernest Hemingway to Humphrey Bogart. A sympathetic and deeply personal portrait of a flawed man who never gave up, even as his every wish and hope seemed thwarted, West of Sunset confirms O'Nan as "possibly our best working novelist" (Salon).

"Christopher Lane's narration of this fascinating audiobook is elegant and engrossing.... Lane's performance is as effective as O'Nan's storytelling." (AudioFile)

What listeners say about West of Sunset

I couldn't stop listening to this book. It was so well written and beautifully narrated. A fascinating story that was a complete surprise to me.
Highly recommended.

This quiet book about the last year's of F. Scott Fitzgerald's life held my interest by detailing a very interesting time in Hollywood and American cultural history, as well as treating Fitzgerald like an ordinary human being rather than an icon. In the waning years of his life, he was a script writer in Hollywood and failing in a dispirited battle with alcoholism, yet still tried to be a decent husband and father in his own way. The book is mostly set in Hollywood, with Fitzgerald's benders even less dramatic than Humphrey Bogart's. There are occasional trips to the mental health facility where Zelda Fitzgerald lives - making us wonder what she would have been like in a modern context with modern pharma and more options than just being a debutante and wife of a once-dashing literary genius. O'Nan does a good job painting the scenes with a wistful melancholy that matches Fitzgerald, with his work ethic and sensibilities unmarred by alcoholism but his gift muted by the disease.

The voice changes thine throughout and it wasn't too noticeable until the last 1/4 and then it happened frequently. Not sure why. Overall, good narrator and the story was good. Slow for the first half, but I found myself falling in love with Fitzgerald.

amazing to see parts of all of his characters were a part of him too!