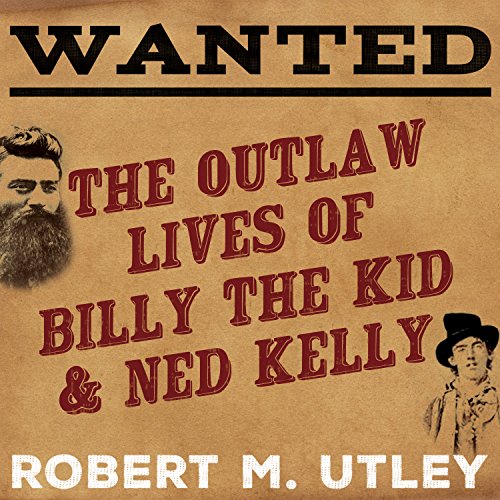 The Outlaw Lives of Billy the Kid and Ned Kelly
By: Robert M. Utley
Narrated by: Tom Perkins
Length: 7 hrs and 16 mins
Categories: Bios & Memoirs, Criminals
4 out of 5 stars 4.2 (6 ratings)

The oft-told exploits of Billy the Kid and Ned Kelly survive vividly in the public imaginations of their respective countries, the United States and Australia. But the outlaws' reputations are so weighted with legend and myth that the truth of their lives has become obscure. In this adventure-filled double biography, Robert M. Utley reveals the true stories and parallel courses of the two notorious contemporaries who lived by the gun, were executed while still in their 20s, and remain compelling figures in the folklore of their homelands.

Billy was a fun-loving, expert sharpshooter who excelled at escape and lived on the run after an indictment for his role in the Lincoln Country War. Bush-raised Ned, the son of an Irish convict father and Irish mother, was a man whose outrage against British colonial authority inspired him to steal cattle and sheep, kill three policemen, and rob banks for the benefit of impoverished Irish sympathizers. Utley recounts the exploits of these notorious young men with accuracy and appeal. He discovers their profound differences, despite their shared fates, and illuminates the worlds in which they lived on opposite sides of the globe.

"A classic study for the ages." (Douglas Brinkley, author of The Wilderness Warrior)

A nice brief biography of Billy the Kid and Ned Ke

This was time well spent. It is a light history of both Billy the Kid and Ned Kelly followed by a comparison of the two.

Would you listen to another book narrated by Tom Perkins?

I think Tom does an alright job. He's not the most captivating performer.