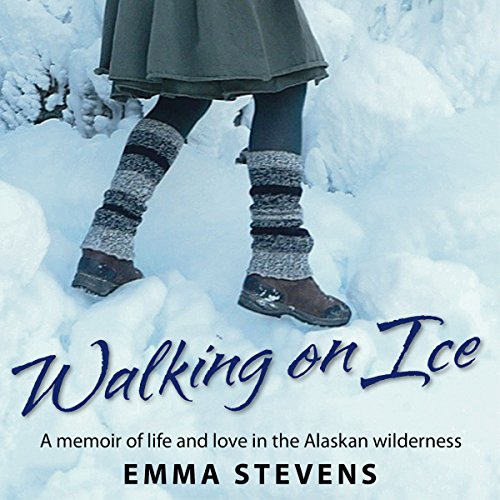 Walking on Ice, written and narrated by Emma Stevens, is the first audiobook in a trilogy of memoirs that are part romance and part “girl’s own adventure”.

The story begins in the warm climes of New Zealand in the South Pacific when an online friendship between an American and a New Zealander blossoms into romance, and it concludes among the Eskimo in the wintry wilds of remote Alaska. For adventurous romantics and armchair travelers alike.

After years of living in Sydney, Australia, Emma Stevens returns to New Zealand ready to live the simple life, teaching in a small rural town with her Tenterfield terrier as companion. Convinced by a friend to vary her social contacts by online dating, Emma is surprised to find herself corresponding with "Kotzman", the principal of a high school in the Arctic Circle in Alaska.

They are worlds apart: while Emma is picking spring flowers, Kotzman is ice fishing; Emma is wrapping up against the chill winds of an Otago winter, while Kotzman enjoys summer caribou camp. However, as the months pass and the relationship deepens, Emma and Kotzman discover they have much in common.

At the millennium, Kotzman/Gary joins Emma to watch the new century dawn on a NZ beach. When Gary returns in the New Year on a sabbatical from teaching, their romance really blossoms.

This memoir tells the story of Emma’s life-changing decision to marry her Alaskan man and leave her beloved New Zealand for a world of snow and ice, caribou and bears, and the Yup’ik Eskimo people.

What listeners say about Walking on Ice

I had the opportunity to meet this incredible lady earlier this year when she visited the Taupō Library promoting her books. Listening to her story was like having her in the room talking to me. She is an amazing lady. Her experience is so remarkable it seems almost impossible, but it is all true. She gives the reader the opportunity to travel with her. There are not enough stars to show how much I enjoyed it. I do hope she is going to read the other two books which tell more about her incredible time in Alaska.