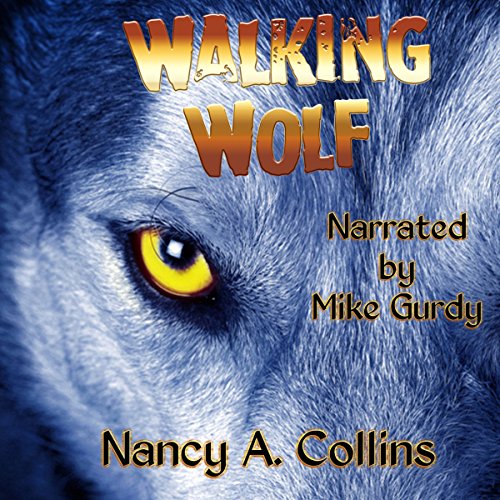 Walking Wolf is the orphaned son of white settlers, found as an infant and raised to be a proud Comanche warrior. He also happens to be a werewolf. When he loses control of his darker nature, Walking Wolf heads out into the white man's world to learn more about who - and what - he is.

This is his story of self-discovery as he travels the Old West, crossing the paths of deranged serial killers, a traveling medicine show, a vampire gunslinger, even a fellow werewolf, as well as such historical figures as Quanah Parker and Sitting Bull. But of all the dangers he finds himself facing, none is as deadly as the bounty hunter known as Witchfinder Jones, who holds the secret of Walking Wolf's origins.

What listeners say about Walking Wolf

I'm a big fan of Native American history so I loved how much the author referred to actual historical people and events! The narrator did an exceptional job with all the different characters and really brought the story to life! I found myself rooting for Walking Wolf in his triumphs and mourning those whom he lost. I didn't want this story to end! I highly recommend this book!!

Could this narrator's voice be any more awful!!!!!

What disappointed you about Walking Wolf?

I couldn't even finish the book, because the narrator is awful

Has Walking Wolf turned you off from other books in this genre?

No, I love this author. I wish her Sonja Blue books were on audible. The narrator made this book one of my worst audiobook experiences.

Would you be willing to try another one of Mike Gurdy’s performances?

I will probably purchase the written version so that I can try to enjoy it. But I will never finish it by listening to it, unless it's re-released with another narrator.