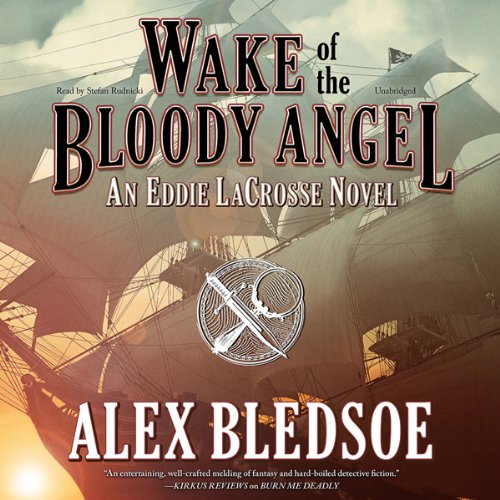 Wake of the Bloody Angel

By: Alex Bledsoe
Narrated by: Stefan Rudnicki
Try for $0.00

Twenty years ago, a barmaid in a harbor town fell for a young sailor who turned pirate to make his fortune. But what truly became of Black Edward Tew remains a mystery, one that has just fallen into the lap of freelance sword jockey Eddie LaCrosse.

For years, Eddie has kept his office above Angelina’s tavern, so when Angelina herself asks him to find out what happened to the dashing pirate who stole her heart years ago, he can hardly say no—even though the trail is two decades old. Some say Black Edward and his ship, The Bloody Angel, went to bottom of the sea, taking with it a king’s ransom in treasure. Others say he rules a wealthy, secret pirate kingdom. And a few believe he still sails under a ghostly flag with a crew of the damned.

To find the truth, and earn his twenty-five gold pieces a day, Eddie must take to sea in the company of a sexy former pirate queen in search of the infamous Tew—and his even more legendary treasure.

Alex Bledsoe grew up in west Tennessee, an hour north of Graceland. He’s been a reporter, editor, photographer, and door-to-door vacuum cleaner salesman. He has published more than fifty short stories on topics as diverse as big-game hunters, mermaids, modern witches, Victorian gentlemen, and country musicians. He has two sons and lives in Wisconsin.

What listeners say about Wake of the Bloody Angel

Good, but not my favorite Eddie Lacrosse story

All "hard boiled" and "noir" stories are dark.
Some are just bitter. This one's a bit too dark for me.

Eddie LaCrosse is a totally affable guy, albeit a very deadly guy in a sword fight, and for 25 bucks a day you can buy his special kind of investigative service... he seems to have a nose for trouble, and a propensity to uncover unbelievable situations!
In this case, Eddie is hired by his best friend to find her old love, a sailor turned pirate, and missing for the past 20 years! To say it would be hard, would be an understatement, more likely it'll be nigh impossible... but Eddie would, for friendship sake, make an attempt to follow this cold trail!
But it's Eddie, remember? and the unfathomable is always lying in wait! If he hadn't been among a ship full of sailors his story of what they found would never have been believed!
So grab this audio book, and let the very talented Stefan Rudnicki, tell you a story about Pirates... and treasure!

A grand Pirate Adventure, and a bit with a dog!

Well maybe not a dog, but there are a couple of giant lizards and sea monsters. Eddy Lacrosse ventures out to solve a mystery for landlady Angelina, which turns into a classic pirate adventure, with enough originality to still be interesting. By no means am I an enthusiast for seafaring / pirate adventures, and I still enjoyed this story - it's solidly enjoyable, and could be enjoyed even if you haven't read any of the earlier ones in the series (although I do recommend listening to all of them). While there aren't many new learnings about lead character Eddy, we do learn a great deal about Angelina's dark past.

I've listened to a lot of Rudnicki's work, and he's always a good narrator in my book, hmm, no pun intended, but I'll leave that in.

Another worthy adventure in the Eddy Lacrosse series!

Goes beyond its initial gimmick.

Before listening or reading this book, do yourself a favor and listen to the song, "Brandy," by Looking Glass. It's on YouTube but worth buying a copy. Since the song came out in '72, many of you may not have heard it, even though it was the number one song of the year.

Anyway, Eddie's client is the Brandy from the song. It sounds cheesy but it works. This isn't like Red Shirts where the gimmick is the whole story. Bledsoe makes this book as good as any in the series, which means that it's way above average. There's the mystery, some fighting and a couple of old favorite characters. Definitely worth it.

Brilliant combination of story and narrator

It isn't often that the fourth book in a series is even better than the previous three. Bledsoe spins a tale of pirates, gold and tropical isles.

Eddie, in taking a case 20 years cold as a favor to a friend has to sail across oceans, track down other pirates and face some rather nasty truths about himself. With well developed characters and non-stop action, this book is more of a thriller and less of a character driven detective story than previous books. The plot is well thought out and developed.

Once again Rudnicki's deep voice is the perfect match for the story. The editing is excellent with nary a mispronunciation, hesitation or duplication in the entire recorded book.

Well the ending is a bit anticlimactic and totally unexpected. It's too bad it's a tale of suffering and torment for many characters that made horrible decisions in the past, apparently dooming them forever. This was sad.

Twists and truns all through this one. Great listen with wonderful characters. Eddie keeps getting deeper and deeper.

it was an odd change from the last books, but I liked it. had all the needed parts. even had a good ending.

still quite enjoyable to read

despite the change in scenery it is still the same as the other books, nice and enjoyable.