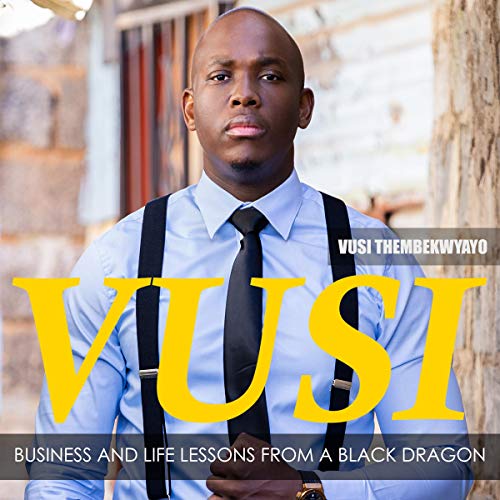 "I have learned the truth about the world: that it isn’t as round as a tennis ball, and it isn’t shaped like itself. It is shaped the way we shape it, according to the way we see it, the way we mould it to our ambitions and our destiny. I know the colour of who I am. I am a black man, running for my life, for my freedom, for opportunity born from struggle, possibility born from sacrifice. And I am running, too, for my father, who never became what he hoped to be, and who never got to see what his children would one day become." Maverick. Leadership genius. Self-made millionaire. Dragon.

The rock star of public speaking. Vusi Thembekwayo has been called many things. Join him in his inspiring journey from the township to the top echelons of South African business, to becoming one of youngest directors of a listed company and CEO of a boutique investment firm. As a Dragons' Den judge and a sought-after public speaker across the globe, Vusi doesn't just talk business - he lives it. Now you can learn the secret of his success and how to shape your own destiny.

What listeners say about Vusi: Business & Life Lessons from a Black Dragon

Since I'm looking to get into public speaking my self, I figured it would only make sense to read Vusi's. I have watched most of his Master Class videos and his speeches.

I have to say, I was kind of disappointed with the narrator. He just didn't convey what I heard in Vusi's voice when listening to him talk. I think my issue is that I watched so much of his speaking events, I became use to his delivery.

Also, it felt like the book was written a more formal tone. So that may have thrown me off too.

So my suggestion is if this is your first time coming across his work. Read the book but make sure to looks for his speeches. You will appreciate the content and context so much more.

It comes down to you.

Good book on reminding you that you are the sum of many parts and not just one aspect of your life. Not so much a "how to" on becoming successful, but more of a "how to" on opening your mind to see successful opportunities, which is wise, as we all see the world differently and as such, will find different modes to success.

Narrator is a mess

Story is good, I always wanted to learn more about Vusy, but the narrator did not do a good job.

I loved this book! Quite the story of starting at the bottom and rising like a PHOENIX!!!

Thank you Mr Vusi Thembekwayo and Mr Mangwani. This has moved me far beyond

Good book. Although I struggles a bit with the 1st chapter but it was a good audio overall.

Beautiful story this was. I loved the way Vusi shared different aspects of his life, from stories of Father's entrepreneurial spirit to his years as a young eloquent speaker . My favourite was his narration of "the barbarians at the gates" in business. Having listened to Vusi for some years now, I wished this was narrated himself in his commanding voice.

loved it and now listening again. I love VT views on Business and SA culture

Love VT hope to meet you one day, from PE

Love it very easy to finish and easy to understand, hope to meet you one day

This book is very good Vusi uses his life expirience to explain business concepts. It really inspired me to think big and deep

Loved this, my only wish is that it was longer and Vusi narrated it himself!

Loved the book so much. It is easy to follow and understand. Enjoyed his perspective on SA black business mind set.

The accent immediately put me off, would have been a good listen if Vusi had narrated this book.

I cant reccomend this book highly enough
this is book a great content or young entrepreneurs
click buy now. this book worth every penny

Really good read, looking forward to the next one already! PS Please fix the spelling mistake on author's name on cover page