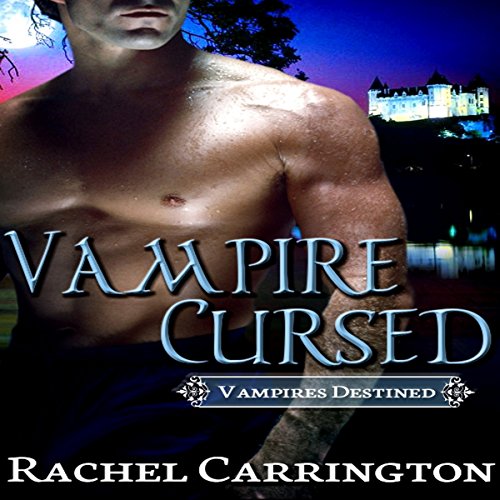 By: Rachel Carrington
Narrated by: Katie McAble
Free with a 30-day trial

Three vampires. Separate destinies. All desiring a woman to love them for who they are, not what they are.

Cursed to live alone. Existing as a cold, soulless vampire. His life is no longer his own.

Nathaniel, Duke of Lehr, has been waiting for someone to love, a woman to break the witch's curse that holds him captive within the walls of his own home. For only unfettered, unconditional love will sever the ties binding him to a reality he abhors.

Abby's been drawn to Castle Lehr for a long time. She wants an interview with the elusive owner, a chance for a big break in journalism. But the story isn't one she can write about in the newspaper.

One moment, one connection, is all it takes for Nathaniel to realize his heart will be forever bound to Abby's, but could she ever trust a vampire much less love one?

What listeners say about Vampire Cursed

Would you consider the audio edition of Vampire Cursed to be better than the print version?

I liked the story but, it was to short and I wanted to here more!

This was a pretty good little story. I liked Abby and Nathaniel and the story was well written for as short as it was. This was the first book I've read by this author but I do already own book #2 in this series. I liked this enough that I'll read #2 and may try more of her work in the future.

Abby is a writer that has traveled overseas to Castle Lehr to write an article on it and it's owner. She's felt drawn to the Castle and has dreamed about it but once she gets there she finds she's very nervous. She meets Nathaniel right away and he is almost painfully blunt about her being his destiny and that the castle is her home. Abby kind of freaks about this but yet can't bring herself to leave even though she's unsure about Nathaniel and his plans for her. There's a pull to him but she tries to fight it...at first anyways. Abby tries to figure Nathaniel and figure out the draw she feels to him and along the way she finds out about the curse and what Nathaniel is. There's some drama at the end but things get worked out and Abby decides that she feels enough for Nathaniel to stay and see if it can turn in to love (and consequently break his curse) so I guess it's a HFN ending with a possibility of HEA. :D

Nice story that's short and sweet. I liked both the MCs. I'm planning to read book #2 in the series...I'm hoping I'll get to see Nathaniel and Abby in that one so I can find out how things work out for them... :D

Just boring. There really is nothing else to say. I didn't even listen past chapter 1.

this was very disappointing and dull, also too short and predictable, i didn't even make it to the end for being bored