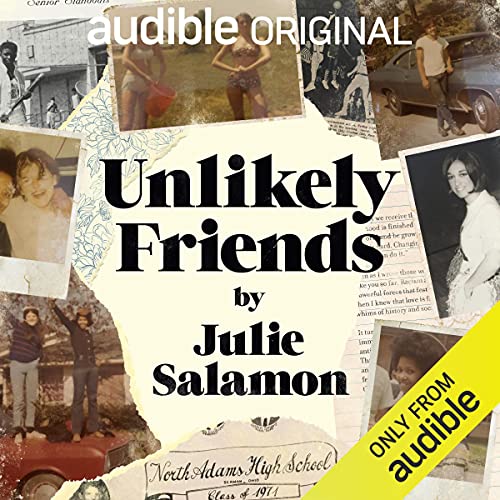 Who am I? Who were these people who made me who I am? And, what was this place? Was it ever what I thought it was?

For celebrated journalist and author Julie Salamon, these recently became central questions. Salamon spent the first 18 years of her life Seaman, Ohio, a town that is part of the American heartland, a repository of mythology and misunderstanding. Seaman, Ohio, remains central to her identity, despite having lived in New York City for more than four decades, the place where her husband and she raised their children, three cats, and two dogs, and built her career and community. And yet, she could never shake the attachment to her childhood town. In fact, in almost every official author bio, it’s put it right up front: “raised in a rural town in Appalachian Ohio." In between projects, she kept going back. Her office is filled with files of interviews conducted with people there over the years. She always was wondering if the home of her memories was truly the way she remembered it.

Seaman is located in Adams County, which is routinely ranked one of the two poorest of Ohio’s 88 counties. In both 2016 and 2020, the county voted for Donald Trump. That reality made Salamon’s examination of her childhood feel urgent, particularly because Salamon and her family were anomalies. They were immigrants from a foreign country. They were Democrats. They were Jewish. In looking back, what Salamon remembers most about this place - despite her otherness - was the overwhelming feeling of acceptance and love. Love for her family, love for the land, and, in particular, love for best friends, Candee and June.

In Unlikely Friends, Salamon tells the intimate story about a conservative backwater that brought together three girls from different backgrounds - Julie, June, and Candee - respectively, Jewish, Black, and Appalachian. Girls who, in all likelihood, wouldn’t have become friends if they had lived anywhere else. While it might appear to be a small tale, as the country’s political divide widens, this personal history of unlikely connection is more pressing, more universal than ever. This is a story about race and religion, about country and community, about the legends people create to make sense of their lives. What Salamon discovers along the way is that memories are indeed complicated. While her fondness for the place and her happy childhood memories aren’t figments of her imagination, the rosy depiction of the past has been incomplete all along. That, like life, memory is a work in progress.

Julie Salamon is an American author, critic and storyteller.
She was a reporter and chief film critic at The Wall Street Journal and then culture reporter and TV critic at The New York Times. Along the way she started writing books—eleven of them, fiction and non-fiction, for adults and children. Her work has appeared in magazines (including The New Yorker, Vanity Fair, Vogue, Bazaar, Town and Country and The New Republic) and several anthologies.
The books have received wide critical and popular attention, among them the international best seller The Devil’s Candy, considered a Hollywood classic and Wendy and the Lost Boys, the New York Times best-selling biography of playwright Wendy Wasserstein. Her latest book, An Innocent Bystander, was published in 2019 by Little, Brown.
The Devil’s Candy has been getting a lot of attention this year, the 30th anniversary of its publication. The book is the subject of a Turner Classic Movies and Campside Media co-production, Season Two of TCM’s hit podcast series The Plot Thickens, with Ben Mankiewicz and Julie Salamon as co-hosts. Hachette Book Group is publishing a new edition of the book, with an updated postscript by the author. And Tantor Media is issuing an audiobook version, which Julie is narrating.
Daughter of Czech immigrants who were Holocaust survivors, Julie grew up in Seaman, Ohio, a rural village of 800, where her father was the town doctor. She is a graduate of North Adams (Ohio) High School, Tufts University and New York University School of Law.
Julie has spent her adult life in lower Manhattan, together with her husband Bill Abrams and their children Roxie and Eli and their various pets, including their current pup Frankie. Julie is board chair of BRC, a leading non-profit organization in New York City that provides housing and treatment services to thousands of homeless adults. She also serves on the board of her synagogue, The Village Temple, as well as the board of the American Jewish Historical Society.
.
ORIGINALS

From iconic memoirs to far-out fantasies, check out our list of the 20 best audiobooks read by their author.

Celebrate a diverse range of experiences with this collection that dares to challenge, champion, change.

What listeners say about Unlikely Friends

Great story until it got political

I was delighted to hear this story of people from a small town and how they grew and what they became as adults. It’s similar to mine. But they lost me when it became about Trump bashing and the vilifying of anyone whose not liberal. I’m cool with their positions but it ruined her whole story line with even having to bring up the former President. Not speaking about the racial discussions. Those were honest and needed and added a great richness to their story. She should have left it there. Because bringing him up will shut some people down when her story is one that needs to be told which is people
Can live together in a color blind way and be friends and be a whole community.

Like other reviewer have pointed out the story turns to politics. I don't understand why the author even bring it up it doesn't add to the story.

Unlike other reviews, I liked the discussion of politics. Not sure why some were surprised by that topic as it was foretold in the “about”.

Just like the other reviewer stated, it was good until it got to the bit about politics. This book had so much potential and the description and images revoked were so well portrayed. Until she seemed to go on and on about politics and people’s political position, and that just deflated the story for me… has nothing to do with my political position.

Many of us .... to some degree....look back on our lives....making determinations of what made us and who we've become. We seldom get the chance to hear another's view of you during that same period. The lens can be decidedly different as Ms Salamon in Unlikely Friends soon finds. Secrets not shared...even between the closes friends...so painful yet finally excavated in this smart memoir Unlikely Friends. I love this story and hope readers will unearth truths that help make it easier to navigate the uncertainties in their own lives.

It has been a pleasure to listen to her childhood. I have already recommended this book to several friends. Her story relates to the struggles of today.

Perhaps my review is not needed but thought I would weigh in anyway. Being one year younger then the author and coming up in a small town n North Dakota it was interesting the similarities in our coming of age experiences. Although we were all pretty much Of Scandinavian and German descent. In fact most of us did not encounter a black person until high school. In previous reviews people are upset because the story was ruined by politics. Perhaps if the author had been conservative the story would have been told differently. However this is the narrative this author chose and she wrote the book not to make everyone feel good. Whether we like her portrayal of Trump etc. is not relevant I don’t think. She expressed the views she thinks are important and relevant to her. If nothing else her thoughts should make us examine our lives and preconceived ideas. I do like her friends comment about how much rudeness are we willing to condone. Personally I never was an Obama or Trump fan. The sooner we can get let go of the not my president mentality is when I believe we can begin to have courteous conversations and begin to bring common decency back to our country.

An important story to here in these times. Julie Salamon is a gifted and thoughtful storyteller. Her experience growing up in a very small town in Ohio gives light to what it means to be thoughtful in life about race, gender, and how we treat each other, either despite our differences or because of them. I very much enjoyed her insights and her story.

A story made for audio

Julie Salamon is a keen observer of people in complicated situations, and her deep empathy and talents as a writer were on vivid display in her previous books. I was so excited to see how she adapted her skills to an audiobook, and she has exceeded my (high) expectations. Unlikely Friends is a powerful story of friendship and love. Hearing Julie's voice and those of her main characters made this audiobook a deeply moving experience.

I loved this book. In fact, once it got started I couldn't stop listening. Julie tells a great story about her child hood experience with her two best friends and their different yet somewhat familiar struggles and hurdles that each of them faced. I loved hearing from them and getting their perspectives as adults. This book is definitely a reminder that we are all more alike than not.