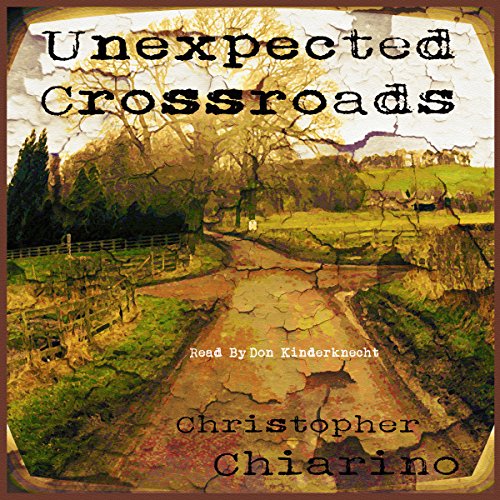 When SD's daughter is killed by a drunk driver, he flees the only place he has ever called home, and in the process, leaves his wife and the memories behind. He is hoping to start over, or at least move forward when he receives a letter from his estranged wife.

In the wake of what the letter reveals, SD finds himself even more lost and alone. It is at this lowest point, that fate, or providence, brings Lincoln Davenport into his life. Lincoln and his wife, Rebecca, are trapped in their overturned car just outside of SD's new home town. He quickly sees a chance for his own redemption, but fate holds a few more twists and turns that may bring an end to them both.

In the midst of tragedy, grief, and near insanity, they can find hope if they have the courage to face reality and accept their need for each other.

What listeners say about Unexpected Crossroads

This book was well written and well narrated. The story developed quickly into suspenseful, action laced drama. There were times I was near tears as well as times I was on the edge of my seat. The story was full of raw emotion, new friendships, and faith. I would definitely recommend this to my friends, family, and anyone who is looking for a good read.

When God shines His light on all.

So I thought it was pretty awesome. I definitely thought I could relate as the ‘hits in life’ the characters take are not unlike what many of us walk through. At one point I found my self getting emotional a few times as I used Audible and just dove in because you definitely feel in your heart the abnormal life processes the characters are walking through. The writer does a thorough job demonstrating this and then linking it all together. I liked this book because there’s a parallel between the characters and then ultimately a fusion which you’ll find yourself really rooting for! There’s a lot of content going on and I found myself asking, “How much more can this poor guy take?!” There’s a great twist and a “Oh, my gosh-No way!” moment as the reader that was just really cool. I walked away from the book just really feeling victorious because after all the content of powerfully negative life experiences-God used every single one of them. Nothing is a complete loss and His hand was obviously guiding even at some points what the characters are visually seeing in reality v. in the spiritual and it was just really amazing. The author is very deep and if you’re willing to go to that deep place so think you’ll find it well worth the read as you’ll be meditating on some of the events of the book in your heart. It was a cool, good, really revelatory, and spiritually strengthening story. Everything comes full circle and we never really know the full extent of things until after the fact. It was pretty amazing to see how broken people become walk in bravery in Gods strength and ultimately real justice.

Loved listening to this! Great wording and really enjoyed the faith, marriage, and psychology within thus book.

This book was a labor of love. I enjoyed going on this journey and I learned a lot about death and connection.