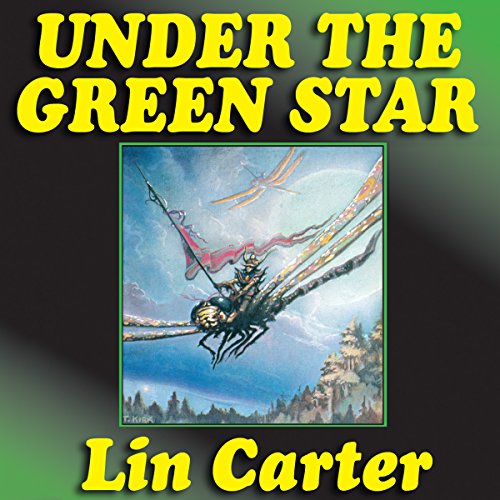 Under the Green Star

On Earth, life held for him only the fate of a recluse - confined to daydreams and the lore of ancient wonders but apparently destined never to share them - until he found the formula that let him cross space to the world of the Green Star. There, appearing in the body of a fabled hero, he is to experience all that his heroid fantasies had yearned for. A princess to be saved... an invader to be thwarted... and otherworldly monsters to be faced!

A thrilling adventure in the grand tradition of Edgar Rice Burroughs, as only Lin Carter can tell it! This edition includes an afterword by Lin Carter.

What listeners say about Under the Green Star

The adventure of a polio stricken earthling who travels across the universe to be reincarnated as the mighty warrior Chong. There are creatures to fight, a beautiful princess to save and protect, a strange world to accept as one's own, and all done with an intelligently descriptive vocabulary. The narrator is easy to listen to, who clearly articulates the descriptive passages without drawing undue attention to the words, and keeps a steady pace. He gives a strong performance with the culminating scene.

Iа you are a fan of Borsoom Series by Edgar Rice Burroughs then you definitely like this book, because 75% of the actions and plot outline are the same!