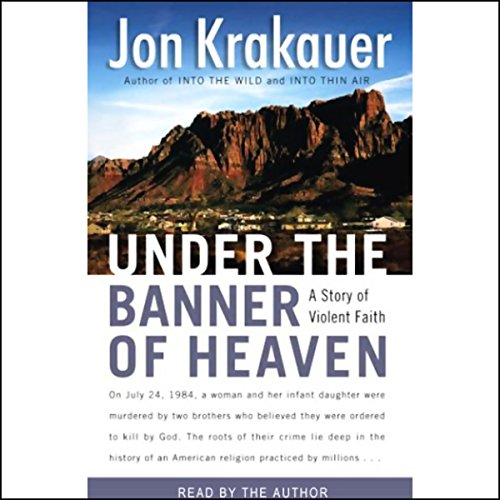 Under the Banner of Heaven

Jon Krakauer’s literary reputation rests on insightful chronicles of lives conducted at the outer limits. In Under the Banner of Heaven, he shifts his focus from extremes of physical adventure to extremes of religious belief within our own borders.

At the core of his audiobook is an appalling double murder committed by two Mormon Fundamentalist brothers, Ron and Dan Lafferty, who insist they received a revelation from God commanding them to kill their blameless victims. Beginning with a meticulously researched account of this "divinely inspired" crime, Krakauer constructs a multilayered, bone-chilling narrative of messianic delusion, savage violence, polygamy, and unyielding faith. Along the way, he uncovers a shadowy offshoot of America's fastest-growing religion, and raises provocative questions about the nature of religious belief.

Krakauer takes listeners inside isolated communities in the American West, Canada, and Mexico, where some 40,000 Mormon Fundamentalists believe the mainstream Mormon Church went unforgivably astray when it renounced polygamy. Defying both civil authorities and the Mormon establishment in Salt Lake City, the leaders of these outlaw sects are zealots who answer only to God. Marrying prodigiously and with virtual impunity (the leader of the largest fundamentalist church took seventy-five "plural wives," several of whom were wed to him when they were fourteen or fifteen and he was in his eighties), fundamentalist prophets exercise absolute control over the lives of their followers, and preach that any day now the world will be swept clean in a hurricane of fire, sparing only their most obedient adherents.

Weaving the story of the Lafferty brothers and their fanatical brethren with a clear-eyed look at Mormonism's violent past, Krakauer examines the underbelly of the most successful homegrown faith in the United States, and finds a distinctly American brand of religious extremism. The result is vintage Krakauer, an utterly compelling work of nonfiction that illuminates an otherwise confounding realm of human behavior.

"Krakauer lays the portent on beautifully, building his tales carefully from the ground up until they irresistibly, spookily combust." (Kirkus Reviews)
"Krakauer presents details that indeed sound stranger than fiction." (The New York Times)

What listeners say about Under the Banner of Heaven

Here are the good things about John Krakauer’s amazing “Under the Banner of Heaven”: It’ll blow your mind about the Mormon church, with a revealing history of the Joseph Smith days and riveting tales of present-day latter-day sait looniness — the Lafferty murders, Elizabeth Smart. The book will get you thinking about how maybe, just maybe, Islamic fundamentalists aren’t all that different from our own homegown Christian fundamentalists. And the author is incredibly talented at weaving history, narrative, and interviews to create a swift weekend read.

Now the bad part: During and after reading the book, you’ll want to talk about it with just about everyone. And on occassion, one of those people will turn out to be a practicing Mormon. And if you’re being really dense, like me, you’ll probably end up making a huge ass of yourself.

If you loved Into the Wild...

...you may just love this book. Jon Krauker has an interesting way of telling a story. In Into the Wild he paints the portrait of a pretty exceptional character - Chris McCandless who donated a huge trust fund to a charity and headed out west in search of...well, who knows? It ended in his death by starvation up in Alaska. As we learn about Chris, we learn about other people who had braved the wild in search of a thrill, adventure, or fame. He weaves in and out of history everytime coming back to Chris's story, which kind of connects some reasoning to why he did what it is that he did.

Under the Banner of Heaven is painted the same way in that we start with a tragedy and the auspiciousness of it unfolds throughout the novel. In the course of the novel, he starts to reveal the motivations of the people who committed this horrible act and how these people, fundamentalist mormons, came to believe what they believe. An excellent history of Mormon religion in the United States.

Not bad, but a bit biased

Krakauer's UNDER THE BANNER OF HEAVEN is interesting and well researched. His examination of the origins of the Mormon church were eye-opening as was his breakdown on the origin of the fundamentalist sect of the LDS church.

I am not a Mormon but one flaw I found here was a disturbingly anti-religious bias on the part of the author. Although he claims toward the end to be fascinated by the "culture" and "faith" of Mormons and other religious folks, it comes off as a bit disingenuous after many statements throughout the book which belittle people of faith or cast all people of faith in the same light.

Again, I'm not a Mormon and my personal opinion of Mormonism is not entirely favorable from a theological point of view; however, I am a person of faith myself and hate to see any group of people painted with the same broad brush.

Yes, the murders detailed in this book are deeply disturbing and some of the history of the LDS church past and present gives one the impression that it's a bit cultic in nature. But to say all Mormons are exactly alike, that they're all just like the two murderers in this book, is patently unfair to mainstream Mormons. To go further and suggest that ALL people of ANY faith are equally corrupt, as he does suggest in more than one spot, is even less fair-minded and betrays the author's admitted agnostic bias; that bias makes the book as a whole a bit suspect.

That said, there's a lot of good information and a fascinating "read/listen" to be had. Just go in knowing the author's bias and you'll be fine.

Krakauer is a good author and certainly has done his research for this one. I have studied the Mormon faith - as I have many others - and find that his research is right on target and thorough. I recommend this book for it's research and documentary merits but have to reserve unqualified praise because it sometimes misses the mark and slowly meanders from its theme leaving one waiting for the point to be made, or, waiting for the point to STOP being made! I wasn't drawn into the characters' lives as I expected, nor was I made to feel any compelling empathy for the victims here. Certainly I felt moral outrage with the Mormon hierarchy and its apparent hypocrisy as well as with the perpetrators of a truly despicable crime. I felt frightened by the moral certitude that the brothers felt and with the parallels with "jihad" in our world. What I did not find was a compelling listen. So, in summary, this is worth the listen - definitely - for its subject matter, but it does have some limitations in its presentation. Recommended with qualification.

Probably too true for the God fearing

As an individual with solid Mormon ancestry on both sides, I believe that this is first book that seamlessly combines a starkly realistic and accurate account of Mormon history and militant Mormon fundamentalism. In the process, it demonstrates the relationship between the two and exposes the inevitable consequences of strongly held religious beliefs, consequences that are strewn through out history, but are here etched into dramatic relief by a religion conjured up only 170 years ago.

A must read -his education on the mormon faith and it's history is necessary for any reader. Good narration by the author.

Well researched and thoughtfully written. It is difficult for me to understand why this book is not on Audible's best seller list and why is has not recevied better ratings.

Under the Banner of Heaven

I found this book completely engrossing - once I started listening I didn't want to turn it off. The author moves back and forth between the foundations of Mormonism in the years of Joseph Smith and present day events. I can see why this book troubles the LDS church, but I think the author does a good job of emphasizing what is LDS doctrine, and where others have misconstrued or taken it in another direction. This book is a caution about any religion taken to extremes however.

This book examines the phenomenon of religious fundamentalism or extremism by examining the Mormon Church and its fundamentalist factions. I understand that these groups are not part of the official Mormon Church, but Krakauer attempts to identify how the religion allows a social space for these cults to form. It was entertaining and seemed well researched, giving one perspective of the history of Mormonism. I bought this book because I really wanted to read it and only had the time during a recent driving trip. I can't help but feel a little cheated because it was abridged. There were several times when events were recapped repeatedly in close proximity. These summaries were perhaps essential in the original version, when you might need a reminder of what happen 5 chapters earlier. However, the frequent recaps in the abridged version felt redundant. Overall, I am glad I bought it; I just wish it was available unabridged.