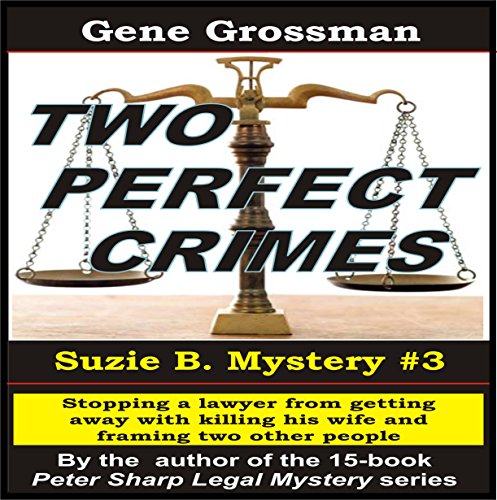 There's one attorney that rubs Peter and Suzi the wrong way most: Mister Morris Arthur, the most devious opponent they've ever faced in court, and one that they feel has been complicit in actions from murder to kidnapping - and getting away with it each time.

But this time he attempts what attorney Peter Sharp, his young legal ward Suzi, and even Peter's bitter ex-wife Myra feel is the worst offense: getting one of their small group of close associates in trouble with the law.

They draw their line in the sand, and as far apart as Peter and his ex-wife who is now the county's top prosecutor have become, they decide to join forces to put an end to this rogue lawyer's despicable behavior both inside and outside the courtroom.

His actions have gone unpunished for previous crimes, and he is now on the verge of succeeding in trying again in two other crimes, so it's unanimous: he must be stopped.

The only way they can succeed in stopping Morris Arthur is by tricking him and his clever attorney into painting themselves into a corner in trial, a position from which there is no favorable way out, and their success or failure may depend on a mistake made by Suzi while having a telephone conversation with the person soon to be the one that's framed.

You will enjoy the give-and-take dialogue and legal maneuvering of district attorney Myra Scot Sharp and Morris Arthur's attorney during a civil trial that Myra hopes will result in forcing Arthur to admit his committing of two recent crimes that he is framing someone else for, especially when the surprise witness of the century is called to the stand, a person whose appearance even shocks Peter.

If you enjoy shows like Law & Order you'll surely appreciate this book, especially because unlike the TV show, it hasn't been "ripped from the headlines". It's been crafted by a real trial attorney.