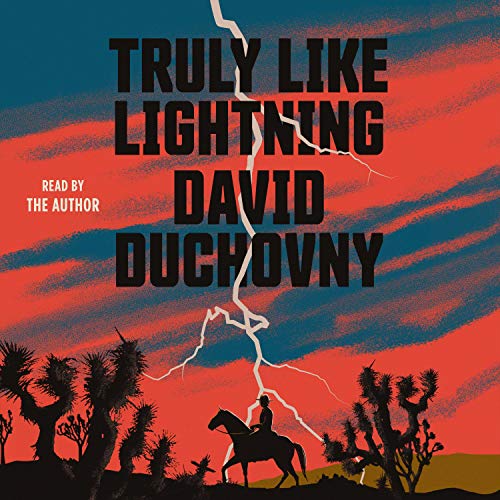 From the New York Times-best-selling author David Duchovny, an epic adventure that asks how we make sense of right and wrong in a world of extremes

For the past 20 years, Bronson Powers, former Hollywood stuntman and converted Mormon, has been homesteading deep in the uninhabited desert outside Joshua Tree with his three wives and 10 children. Bronson and his wives, Yalulah, Mary, and Jackie, have been raising their family away from the corruption and evil of the modern world. Their insular existence - controversial, difficult, but Edenic - is upended when the ambitious young developer Maya Abbadessa stumbles upon their land. Hoping to make a profit, she crafts a wager with the family that sets in motion a deadly chain of events.

Maya, threatening to report the family to social services, convinces them to enter three of their children into a nearby public school. Bronson and his wives agree that if Maya can prove that the kids do better in town than in their desert oasis, they will sell her a chunk of their priceless plot of land. Suddenly confronted with all the complications of the 21st century that they tried to keep out of their lives, the Powerses must reckon with their lifestyle as they try to save it.

Truly Like Lightning, David Duchovny’s fourth novel, is a heartbreaking meditation on family, religion, sex, greed, human nature, and the vanishing environment of an ancient desert.

A Macmillan Audio production from Farrar, Straus and Giroux

One of the biggest surprises of the year for me was discovering that David Duchovny was an accomplished writer. While listening to this book, whenever I found myself admiring the language, the authentically portrayed characters, the intricately developed plot and the thorough research that must have gone into it, I pictured agent Mulder. It blew my mind, every time.

I listened to this after hearing an interview with the author on Marc Maron (read it Marc!). The characters are all so real and the saga of the family is heart breaking. The time listening flew by as I was surrounded by the story. A narration by the author is always a plus to me and was so good this time.

I love David Duchovny's books, this is the 3rd one I've read/listened to. All have been interesting, entertaining, and well written. This is probably my fav, but if you would have asked me while reading the other two I would have swore that they were my fav. I'll keep reading them as long as he keeps writing them!!!

The characters are many and multi-layered. You empathize. You agonize. You feel. The novel takes you on a journey that makes you question the world and humanity, sex and religion, right and wrong. You laugh; you cry; and gasp at the ending. And, then you want more. This will be a book you will listen to over and over again. Loved it!

this was a very unique experience. a look into the world of an extremist morman family. It's as much a family drama as it is a thriller. it's as much a comedy as it is a tragedy. It does do some unnecessary bashing on conservatives that I found obnoxious but the story and characters were so great i can look past my one issue.

Sounds like it was recorded on an iPhone. Terrible quality. Book maybe good but I’ll have to read it.

Great book being defined as one you hate to see end, you can't stop thinking about it, and you know you'll read it again and again. This is a great book

Sounds like it was recorded in a garage, or tin can - had to quit it. A shame this one for me.

The best story, for me, all year. The research and character development was pristine and compelling. DD’s writing is better with every novel. I’m going back now to listen to all I’ve read. I enjoy listening to the author read his own work.

The book itself is great, but the recording quality is awful. sounds like it's been recorded in a caravan. Such a shame.

The story and performance were excellent but the audio quality made this a tough listen and spoiled the audiobook for me.

In-depth Concise A World Without Adjectives

Did not read anything about this book before downloading it so actually I had no idea what the story was about. I’d seen David Duchovny mentioning’Truly Like Lightening’ with some of the music written for this audiobook production so thought I’d give it a go.

One of the ways I judge how good an audiobook is for me personally by how much else I can do whilst listening to it being read, and still retain the plot enough to follow on with the characters.

Two things, David Duchovny is an outstanding actor in the first place so his books, all of them, are really easy to become immersed within, the characters are all layered not just as surface written so your imagination gets a chance to work in harmony with the storyline. That’s absolutely true here, I became immersed very quickly.

The second thing is the well researched storyline and personal connection really does show.

The whole thing feels very real from beginning to end.

Something different from a very talented writer, five stars from me.

I am thankful for the experience.

Loved it thank you dd

Loved it. Will read again. Looking forward to the TV show. Next book from you please. Loved all 4 so far. All do different.

I enjoyed listening however it's one of those books where there's too much going on that you dont have a lot of time and story to care about the characters as much as you would want to when immersing yourself in a book. its nicely written. audio is also very echoey and a bit inconsistent at points. overall not bad but didn't blow my socks off either

My fourth Duchovny book, like his previous three this story holds up a fun house mirror to Americana.

Great story fundamentally undermined by shocking production. Simply the worst production I have experienced in over 60 audible recordings. Everything from the tinny echo that sounds like it was recorded in a wood panel lined broom closet, to the dodgy drop ins, to the mastering. This book deserves to be re-recorded, and those who purchased this version should be given it for free.

It took me a while to get into this book but I think the problem was more me than the story, once I got into the story I was addicted and couldn’t put it down. Highly recommend.