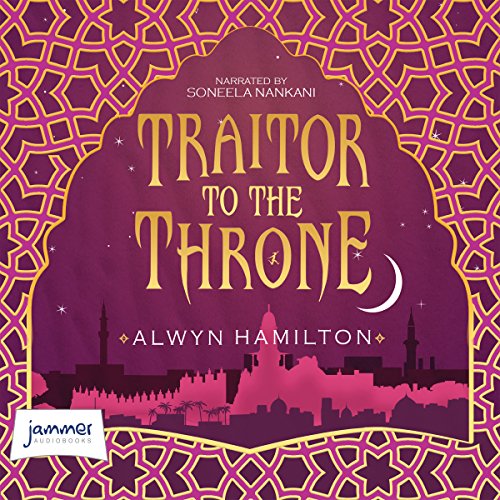 Traitor to the Throne

By: Alwyn Hamilton
Narrated by: Soneela Nankani
Try for $0.00

Nearly a year has passed since Amani and the rebels won their epic battle at Fahali. Amani has come into both her powers, and her reputation as the 'Blue-Eyed Bandit' has spread across the desert - and some might say out of control. But when a surprise encounter turns into a brutal kidnapping, Amani finds herself betrayed. Stripped of her powers and her identity and torn from the man she loves, Amani must return to her desert girl's instinct for survival.

The second instalment of this highly acclaimed trilogy, Traitor to the Throne throws the irrepressible Amani into a world of espionage, harems and the Sultan himself.

"Picture a gun-slinging, hard-drinking wild west, transpose it on to a sweeping, romantic desert, then add a rebel prince bent on overthrowing a wicked sultan, and a little magic in the manner of A Thousand and One Nights. It's a winning combination." (The Guardian, on Rebel of the Sands)
"A hugely entertaining, lushly painted Western with a rich seam of Arabic culture, djinni magic, breathless romance and show-stopping action sequences." (The Bookseller)

What listeners say about Traitor to the Throne

Beautiful book with multicultural setting and characters, and a strong female lead. I'm quickly moving on to the third installment

I would recommend reading the book along with the audio fully connecting with the story. this was incredible

Not a disappointing sequel... but seriously, what's with this romance?!

This book is an action packed sequel to Rebel of the Sands. Without revealing too much, let me assure you you will be satisfied with more bullets, scars, sardonic exchanges, magic, death, the lack there of, and even a "plot twist" (in quotes because you pretty much know it's going to be there, even if you can't predict all the details).
You will also encounter a slightly disappointing romance... let's just say that the author starts out with a plot choice that makes sense, but that combined with the later story gives gives us a lot of "oh, Jin..." from inside Amani's head, and a make out scene that gets interrupted before the characters do "something more"... I guess I just like the characters enough that I wanted a better story for them. Don't judge.
Aside from that small beef, I really enjoyed this book. The audio narration was great, the story has potential (can I get some international political intrigue a la Megan Whalen Turner in here please?), and the Real Drama will get you.

I'd recommend this book to anyone who liked the first one, fans of the Bartimaeus trilogy, YA readers of the Queen's Thief series... also YA readers of Dune.

This book reads just fine on 2.0 speed, in case you were wondering.