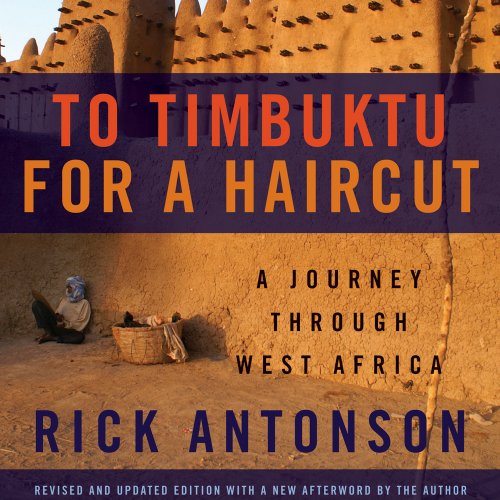 To Timbuktu for a Haircut

By: Rick Antonson
Narrated by: James Conlan
Try for $0.00

"Although Timbuktu exists, there is a common belief that it is, in fact, nowhere."

Timbuktu: the African city known to legend as a land of scholars, splendor and mystery, a golden age in the Sahara Desert. But to many it is a vaguely recognizable name - a flippant tag for "the most remote place on earth." With this fabled city as his goal, author Rick Antonson began a month-long trek. His initial plan? To get a haircut.

Aided by an adventuresome spirit, Rick endures a 45-hour train ride, a swindling travel agent, "Third World, three-lane" roads, rivers, and a flat deck ferry boat before finally reaching Timbuktu. Rick narrates the history of this elusive destination through the teachings of his Malian guide Zak, and encounters with stranded tourists, a camel owner, a riverboat captain, and the people who call Timbuktu home.

Antonson’s eloquence and quiet wit highlight the city’s myths - the centuries old capital and traveler’s dream - as well as its realities: A city gripped by poverty, where historic treasures lie close to the sands of destruction. Indeed, some 700,000 ancient manuscripts remain there, endangered. Both a travelogue and a history of a place long forgotten, To Timbuktu for a Haircut emerges as a plea to preserve the past and open cultural dialogues on a global scale.

The second edition of this important book outlines the volatile political situations in Timbuktu following the spring 2012 military coup in Mali and the subsequent capture of the city by Islamic extremists. Literally, it is a race against time to save the city’s irreplaceable artifacts, mosques, and monuments, and to understand why Timbuktu’s past is essential to the future of Africa.

“Anyone planning a trip to Africa should put Antonson’s book on their packing list right after malaria tablets.” (National Post)

“The remarkable combination of Rick Antonson exploring the ancient mysteries of Timbuktu matched with the rich culture of Mali that he captures so well...makes a page-turner from start to finish.” (Jerry W. Bird, editor, Africa Travel Magazine)

What listeners say about To Timbuktu for a Haircut

Fascinating story of one man’s journey to Timbuktu, skillfully narrated

Driving along the coastline of Vancouver Island and listening to Antonson’s story of his travel to Timbuktu made the contrast of what I was seeing and that of the southwestern Sahara very stark indeed. His journey seemed one better listened to than undertaken oneself. The writing is lively, often poetic and vivid. From moments of chaos, typical of third world countries, clear prose emerges from the mind of a seasoned traveller who balances the thrill of exploration with the determination to reach his destination. This is not a guidebook filled with travel suggestions and timetables for, as you will read, both of these are ephemeral. Locations can be open to visit, then the methods of getting there disappear. Timetables for trains and buses are maybes, not sures, or no longers. If you are one who longs for thoughtful and adventurous travel, yet is lured by the comfort of an armchair, then To Timbuktu for a Haircut can be thoroughly enjoyed with the skillful narrator.