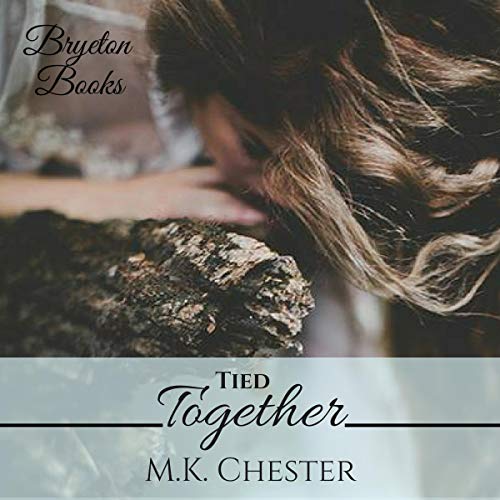 By: M.K. Chester
Narrated by: Jennifer Groberg
Try for $0.00

When Ben Sheridan is released from prison in 1936, he returns to his hometown to lead a simple life. Although he's paid his debt to society, he's never forgiven himself for the unthinkable act that forced him to take the life of his step-brother over a decade before.

Storekeeper Heather O'Malley has never played the victim, but she's still a "scarred" young woman. She seizes the opportunity to help Ben restart his life, in part to atone for her silence about the events that sent her rescuer to prison.

Ben can't resist Heather's free-spirited approach to life, and she can't resist his reluctant charm. Neither intends to fall in love, but when dangers from their past threaten their connection they discover just how fiercely they're willing to fight for each other and their future.

What listeners say about Tied Together

M.K. Chester is one of my favorite authors!! She is a dynamic writer. This book kept me up all night! That is a complement!! The characters in this book are well rounded, storyline is enticing, and narrator's voice is beautiful. This book is on my favorite shelf!

Tied Together by MK Chester takes place almost a century ago. Having grown up watching The Waltons, I could visualize so much from this book. This book is so much more than a period listen. It is full of healing, hope, redemption, and love. The author did a fabulous job developing the characters and creating the atmosphere with vivid imagery. Jennifer Groberg's narration was spot on. She gave the right emotions and inflections to her voice. I requested this review copy audiobook and have voluntarily written this review. I will definitely listen to more books by this author and narrator. I'm glad I tried something outside my typical genre, and am grateful that times have changed.

Kept wanting to see what would happen next.

Great read. Impossible not to get sucked in and attached to the characters. It wasn’t overly long which I appreciated. Some books dragon places because the author feels they need to make the story longer, but this book flowed nicely without the drags.

Had high hopes & could have been so much more. So strangely written… it's like insta love with hardly any character building of either. I still feel like I don't know either of them other than their work ethics. They acted as if they were Christians at the beginning, going to church regularly and by the end they were in bed together sleeping through services. Was this supposed to be a liberation? Rebellion? If you aren't a Christian then why say it and then totally throw it away for sex!? Even if you write as if they aren't, don't take a historical book and treat it as if there wouldn't have been any consequences in that time period!

The whole sex thing really turned me off. Now, I like a decent story with some sex thrown in but, again… strangely written. You don't go from being embarrassed and turning red at just the thought of saying the "L" word, nervous about a kiss and then a week later practically ripping his clothes of and impaling yourselves on his erection as a VIRGIN, with no foreplay much less heavy petting!

The "mystery" was weekly played as well. I wouldn't even know how to properly classify this book… it's not a mystery, not a romance, not a historical romance. I just don't know. By the time I reached the end, I was happy for it to just be over. :-( I wanted love, emotion, Historical based realism, a mystery, a real heart jerk for their pasts.


My star ratings include these 5 elements:

.75★ story line
.5★ engaging characters
.5★ use of world building/descriptions
.5★ the ending
1★ narration or editing


"I was given this free review copy/audiobook at my request and have voluntarily left this review."

great read, kept my attention until the end, felt like I was part of the story.

Again, MK Chester knocked it out of the park! I love listening to her audiobooks! She brings sweet southern charm right to my car! Her romances are not too fast nor too slow, they are clean and sweet, and I love how I feel immersed in a past time. I look forward to all she has to write!

Tied together is a beautiful historical romance. I like the mystery aspects of it. Heather is a strong-willed and passionate character, and seeing her interactions with Ben make the entire book interesting and fun. The narrator did a great job distinguishing between characters.

I was completely and totally immersed in this story from the beginning. I thought it was a great story. There was plenty of drama with a good balance of romance and a little “mystery” too. The plot moved along at a steady pace. I felt very empathetic to the main character and wanted to see things turn out good. I liked most of the characters throughout the book. I would highly recommend it to others. the narrator did a decent job at reading the book. I don’t think I have heard her read before.

Another Great Read from M.K. Chester

I offered to review this audiobook because I am such an an avid reader but also almost exclusively audio due to my schedule. Because of this, and the fact that a bad narrator can destroy a great series, I can be very critical of narrators. Especially when books have a single narrator required to speak with different voices for multiple characters. Most cannot do it without having some errors where they use the wrong 'voice' for the wrong character. Jennifer Groberg does a great job in narrating this book! It was a very enjoyable listen and I didn't have any issues distinguishing between characters.

As to the story, I am not one to give a lot of specific story details since I feel you should read the story for that. Tied Together is a continuous of The Bootlegger's Bride series I previously reviewed, but set far enough away from it to be totally independent with some common characters for reference. It is a historical romance that shows good can triumph over evil in the end. The book includes interesting characters, with lots of twists and turns that will keep you listening long into the night.

I received a free review copy of this audiobook and am voluntarily leaving a review.

The narration was enjoyable. The story was great and would have a 5 star review if it didn’t contain the sex scene. The characters were well developed and the story line was original. It kept me engaged and wanting to know what happened next.

This book had me entranced all day while I was listening. MK Chester writes this story taking place almost 100 years ago, but the story transcends time. Ben has recently been released from jail for murder. When he bumps into Heather, the girl he saved when he committed the crime, their instant attraction is strong, but their connection from history even stronger. Ben's past is something that continually haunts him, and when new murders begin to start, there is no other suspect. Or is there? This book is full of suspense, intrigue, faith, hope and love. I found myself immersed in the book trying to figure out the hows and whys of what happened. It includes so many topics that are still prevalent, from mental illness to domestic abuse and it's intricately woven into a love and redemption story.

Jennifer Groberg captures each of the characters perfectly. Her narration is wonderfully executed, each person with their own voice, the right amount of angst and emotion. I think she did a beautiful job with it and look forward to more.