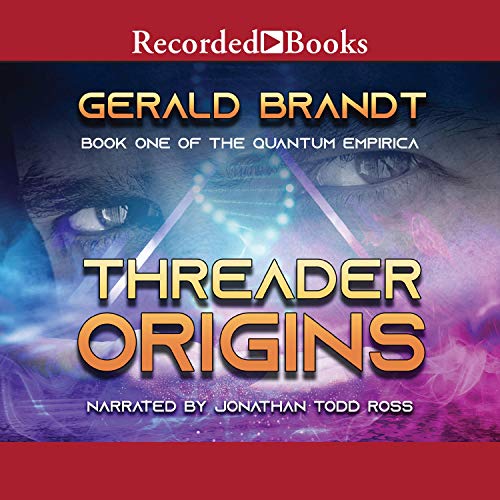 By: Gerald Brandt
Narrated by: Jonathan Todd Ross
Try for $0.00

This first book of a new sci-fi series introduces an alternate Earth where powerful Threads have the power to alter reality as we know it.

Pulled from his world by an experiment gone wrong, Darwin Lloyd is one of the few who can see the Threads - quantum strings that can be manipulated to change or control reality. On an alternate Earth ravaged by war, Darwin is torn between the Qabal and SafeHaven, his only goal to find a way back home and stop the same fate from happening in his time line.

Threads - thought of as a gift from the machine he helped his father create - and Threaders are both loved and hated, treated as gods by some and as criminals by others. Out of his element, Darwin must learn how to control the Threads and possibly join the hated Qabal to find the path back to his dad.

But Thread use comes at a price. Follow the possibilities and probabilities too far and the human mind shatters, leaving the Threader a mindless, drooling husk. Yet the Thread's pull is almost irresistible, and a constant battle for those that can see them.

In this strange new world, Darwin discovers what he could never find on his own: friends, family, love, a mother he lost years before, and a younger sister he never had.

What listeners say about Threader Origins