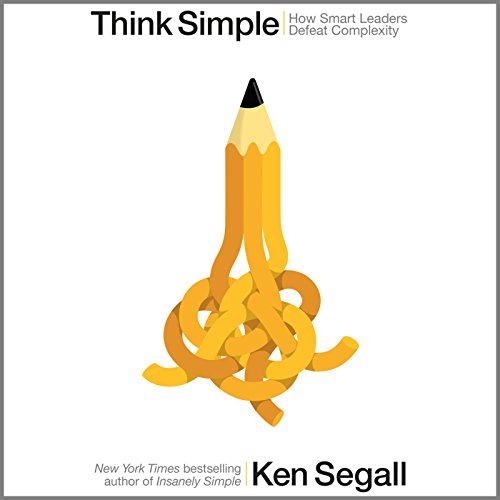 Simplicity is arguably the most potent weapon in business - attracting customers, motivating employees, helping companies to outthink competitors, and creating new efficiencies. Yet rarely is it as simple as it looks.

Ken Segall's first book, Insanely Simple, was based on observations gained from 12 years working as Steve Jobs' advertising agency creative director, first with NeXT and then with Apple. He saw firsthand that Jobs looked at everything through the lens of simplicity. His obsession with simplicity was visible not just in Apple's products. You could see it in the way the company was organized and how it innovated, advertised, sold at retail, and provided customer service.

In practice simplicity was Jobs' most powerful business weapon. It helped Apple distinguish its products and create entirely new product categories, and it put distance between Apple and its competitors. But while Apple is a terrific example of a company that has been propelled by the power of simplicity, it is hardly alone.

Inspired by the ways Apple has benefited from the power of simplicity, Segall set out to find other companies that were traveling this path. He wanted to learn more about the thinking of their leaders. He felt that if he could chronicle the experiences of those who have successfully simplified, it would be an invaluable guide for everyone who would like to do the same.

This book is the result of his journey into simplicity in companies around the world.

Many of the "heroes of simplicity" profiled in this book are probably not on your list of usual suspects. Segall had conversations with over 40 men and women from a wide range of industries, in companies big and small, established and up and coming, famous and below the radar.

Each leader has a fascinating point of view about how simplicity has helped improve his or her company and set it apart from competitors. Each is unique, yet, as you'll find, many display interesting similarities.

From Jerry Greenfield, you'll hear how Ben & Jerry's grew from local to global without losing its focus and simple values. From the CEO of one of Australia's biggest banks, you'll hear how simplicity is attracting new customers. From former Apple senior vice president Ron Johnson, you'll hear how a simple idea aligned the team creating the worldwide network of Apple Stores.

You'll discover how simplicity influences the CEOs of The Container Store and Whole Foods. You'll get insights on simplification from the worlds of fashion, automobiles, entertainment, and technology. You'll even get inside the blue heads of the Blue Man Group, who developed a business strategy to defeat complexity before it could take root.

“Steve Jobs’s favorite communicator has created a must-read manual for anyone interested in simplifying their way to success. Ken Segall gathers the best advice from industries and leaders around the globe, and combines it with his own experience on a rocket ride with Apple from life support to world domination.” (Steve Hayden, vice chairman, Ogilvy & Mather (Retired))

“Ken Segall shows how simplicity in a product requires simplicity as embodied in the company that makes the product. He explains, with countless examples, that when a company's mission, vision, and values embrace simplicity, the result is a successful company that can produce higher quality outcomes with less bureaucracy and mediocrity." (John Maeda, partner, Kleiner Perkins Caufield & Byers and author of The Laws of Simplicity)

"How do you appeal to customers when the competition can do virtually the same job? Having the right answer to this question is a matter of brand life or death. Fortunately for us, Segall's practical book gives us exactly the insights we need to succeed in a complicated world." (Nir Eyal, author of Hooked)

What listeners say about Think Simple

Absolutely incredible! Should be required reading…

loved it. the power of simplicity that my team invests time and effort in is corroborated by the examples of great people and their stories in this book.

Not as good as the first one. But it’s still worth a read if you have the time.

there were many times during the book that I felt like I was listening to an advertisement for Apple, versus an objective look at simplicity.

Should be titled Think Apple

I love the concept of this book; however, the narrative became repetitive and filled with platitudes. I also found the singular emphasis on leadership isolating. I did find the author knowledgeable but didn't find anything particularly outside the realm of common sense. The stories were interesting, if not particularly helpful.

This book has very little meaningful information. It can be summed up in the simple quote "Keep it simple stupid".

Don't by this book. the simplest anecdotal view of BUSINESS shtick. no intellect, no value. no damn good.