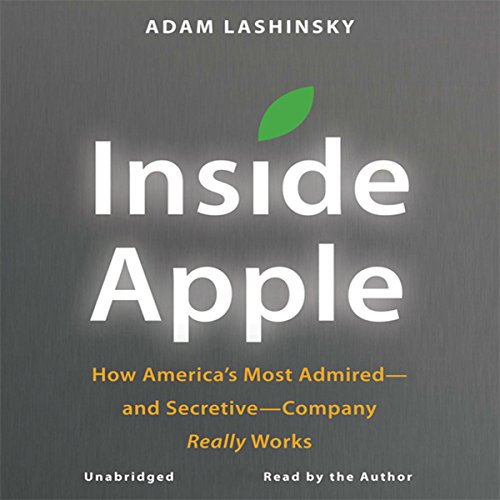 Inside Apple reveals the secret systems, tactics, and leadership strategies that allowed Steve Jobs and his company to churn out hit after hit and inspire a cult-like following for Apple products.

If Apple is Silicon Valley's answer to Willy Wonka's Chocolate Factory, then author Adam Lashinsky provides listeners with a golden ticket to step inside. In this primer on leadership and innovation, the author introduces concepts like the "DRI" (Apple's practice of assigning a Directly Responsible Individual to every task) and the Top 100 (an annual ritual in which 100 up-and-coming executives were tapped, à la Skull Bones, for a secret retreat with company founder Steve Jobs).

Based on numerous interviews, the book offers exclusive new information about how Apple innovates, deals with its suppliers, and is handling the transition into the Post Jobs Era. Lashinsky, a senior editor-at-large for Fortune, knows the subject cold: In a 2008 cover story for the magazine, entitled "The Genius Behind Steve: Could Operations Whiz Tim Cook Run The Company Someday?" he predicted that Tim Cook, then an unknown, would eventually succeed Steve Jobs as CEO.

While Inside Apple is ostensibly a deep dive into one, unique company (and its ecosystem of suppliers, investors, employees and competitors), the lessons about Jobs, leadership, product design and marketing are universal. They should appeal to anyone hoping to bring some of that Apple magic to their own company, career, or creative endeavor.

What listeners say about Inside Apple

Although the title is Inside Apple, I did not get a good sense of which part of the contents were the inside story of Apple.

Most of them to me sounded like a compilation of vast media materials that covered this company over the past 15 or so years.

In the same sense, this book is super helpful for people who are new to Apple and want to learn the company in relatively short time (as the author already carefully categorized the press coverage to great degree in chapters).

I must mention that the pace of reading was too slow. Perhaps a professional narrator would have been better.

the magic of execution

Terrific inside look at how Apple gets it done. Beyond the awesome products, its process of building and launching these gems is very unlike the other tech giants. Adam Lashinsky does a great job telling the story in very understandable terms. He has pretty good narrator chops too.

This book provides an interesting peak behind the current of Apple. I enjoyed the book and efforts the author made to help illustrate the magic of Apple, Inc.

made me think throughout the book on how the future can be promising for all who are in business.

What did you love best about Inside Apple?

It was really interesting to see how the company works. And since I've never studied or worked in business, I learned a lot about both how this specific company works and how other companies work.

What other book might you compare Inside Apple to and why?

This is the first book I've read about business, so I don't have anything to compare it to.

He sounds like he hates Apple. I know consonants and measured timing are important when you're reading out loud, but those combined with the way his voice rises and falls in pitch sound worse than artificial -- it sounds snide and judgmental. Extremely distracting from the information presented in the book.

Informative profile of Apple as a business

I audio-read Walter Isaacson's biography of Steve Jobs before I read "Inside Apple". Taken together, both books create a fuller understanding of Apple than each on its own.

I like narration in most non-fiction books to be clean and level, well inflected, yet without overly dramatic flourishes that get in the way. Todd Mundt, who is one of the narrators of The New Yorker, is the very best at this, in my opinion.

I'm usually hesitant to purchase audiobooks that are narrated by the author, but I took a chance this time, and Mr. Lashinsky delivered a solid performance, so no regrets there.

From this book, I learned a lot more about Apple as a business, and the focus is much less on Steve Jobs than on the company, and that is a strength of this book.

No Apple senior manager (and probably no current employee) would agree to an interview for the book, and Adam Lashinsky has drawn extensively from a wide variety of credible sources to overcome that. Nevertheless, this is a weakness, as the book remains incomplete without a current manager's insights. I think it would have been a more comprehensive and engaging book if such access had been granted.

Since this behaviour is entirely consistent with the portrait painted of this most secretive of companies, it is understandable, and I still found the book informative.

Most surprising, for me, was discovering that this company that places so much emphasis on product quality and customer experience is not a great place to work. I am not sure why I expected it to be...well...more fun, in the sense of all these brilliant, passionate people creating marketplace magic together.

Instead, the Apple that emerges in Lashinsky's book is a high-stress nose-to-the-grindstone, need-to-know culture where the focus is exclusively on a narrow range of activities associated with one's current work assignment. Talk about Apple, to anyone, even other employees, and you're done. Scary.

I appreciated the effort the author took to discuss Apple's future without its powerful founder. Already, some of what he predicted - turnover in the Executive ranks - has come to pass with the departure of two top Executives within the year immediately following his death. It will be very interesting to see if Apple's approach to business can endure without its brilliant founder.

I recommend this book for any student of business, especially those interested in employee culture and branding.

Great coverage without the hype

What made the experience of listening to Inside Apple the most enjoyable?

The fact that it was done so well, covered so much ground, got into the personal and professional details of the story without getting caught in the hype, was very impressive. This book didn't just tell an important story, it provided useful information that can be dissected, argued about, and contribute to our understanding of the tapestry that is today's business and management environment.

I didn't have one specific character that was my favorite. In fact, most of the characters seem like they are hard to know -- a little mysterious -- which probably adds to the allure of the overall story. Nothing quite so appealing as a little mystery.

Which character – as performed by Adam Lashinsky – was your favorite?

Once I got going, it was hard to put down.

One of the best books about business that I have gone through.

Inside Apple shows the other side of Steve's story and it's an excellent companion to that book. It deeply describes how the company works, what drives its employees and what makes Apple the company with the best products in the market.

not alot of news

after ready steve jobs biography, this book does not add much.

Do you think Inside Apple needs a follow-up book? Why or why not?

no, does not new anything.

Should have been read by a pro

While I didn't feel that I learned a great deal of new information about Apple from this book, I *did* learn quite a lot about the individuals. Having worked in similarly high-pressure environments, this book helped me appreciate why working at Apple must be like taking a drug--you love the high, but you know you can't sustain it forever.

My wife, who is moderately technical, and not nearly as knowledgable about Apple, listened to this along with me and repeatedly said, "Those poor people." Unable to understand the endorphin rush that tech people experience when working on something new and fantastic, all she could see was the long hours, loss of friendships and relationships, and a sense of the oppressive environment that *is* a modern tech company.

Given the differences in our work experiences (I'm an IT consultant and she's a school teacher), I'd say that Lashinsky's book created exactly the kind of reactions he wanted. The only quibble I have with his performance is that it's all-too-easy to spot places where he revised a section for fact correction or to fix a pronunciation issue. Not having a pro perform this takes you out of the story a bit, and reminds you that you're listening to an audio book, and not a conversation with the author.