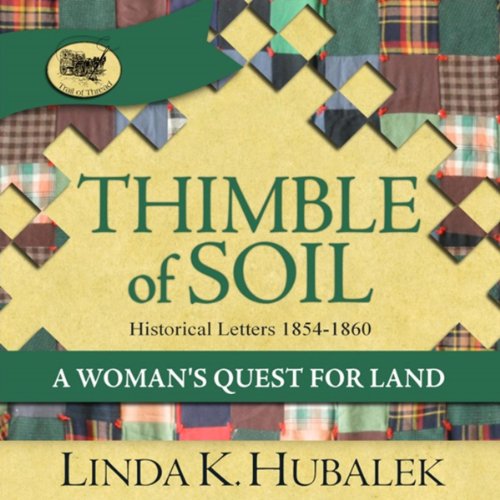 By: Linda K. Hubalek
Narrated by: Pam Dougherty
Try for $0.00

Follow the widowed Margaret Ralston Kennedy (a relative of the author) in this second audiobook of the Trail of Thread series, as she travels with eight of her thirteen children from Ohio to the Territory of Kansas in 1855.

Thousands of American headed west in the decade before the Civil War, but those who settled in Kansas suffered through frequent clashes between pro-slavery and free-state fractions that gripped the territory.

Told through her letters, Thimble of Soil describes the prevalent hardships and infrequent joys experienced by the hardy pioneer women of Kansas, who struggled to protect their families from terrorist raids while building new homes and new lives on the vast unbroken prairie.

Margaret was dedicated to the cause of the North, and while the male members of her family were away fighting for a free state, she valiantly defended their homestead and held their families together through the savage years of Bleeding Kansas.

Experience the terror of the fighting and the determination to endure as you stake a claim alongside the women caught in the bloody conflicts of Kansas in the 1850s.

What listeners say about Thimble of Soil

Would you listen to Thimble of Soil again? Why?

I would listen to it again. So many interesting historical facts and so much of the actual daily lives of that time.

Linda Hubalek has a very gentle, homespun style of writing. I felt I was sitting next to her. Pam Dougherty does a marvelous job with the narration. Her voice is quite sincere and she conveys the story very, very well.