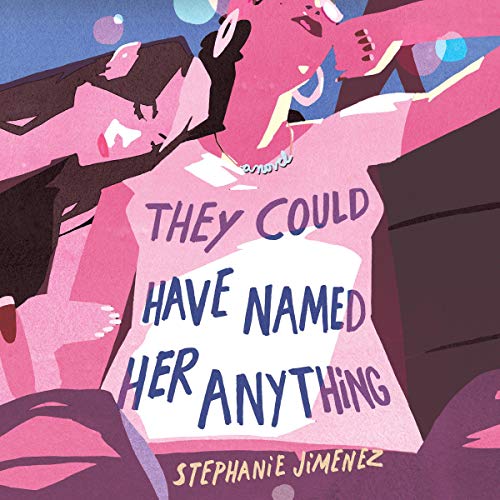 They Could Have Named Her Anything

By: Stephanie Jimenez
Narrated by: Almarie Guerra
Try for $0.00

Racism, class, and betrayal collide in this emotional debut novel about restoring the broken bonds of family and friendship.

Every morning, seventeen-year-old Maria Anís Rosario takes the subway an hour from her boisterous and close-knit family in Queens to her private high school on the Upper East Side, where she struggles to fit in as one of the only Latina students - until Rocky welcomes her into this new life. White, rebellious, and ignored by her wealthy parents, Rocky uses her money toward one goal: to get away with anything. To Maria, it’s a dazzling privilege.

As a bond develops between these unlikely friends, neither can see what they share most - jealousy and the desire for each other’s lives. But crackling under the surface of their seemingly supportive alliance, the girls begin to commit little betrayals as they strive to get closer to their ideals regardless of the consequences.

Told from the perspectives of Maria, Rocky, and their fathers, They Could Have Named Her Anything explores the heartfelt expectation of what it means to live up to the name you’ve been given and the more rewarding discovery of what really matters.

“Bristling with adolescent insecurities, sexual tension, and status consciousness, Jimenez’s debut is a natural for both adult and teen readers.” —Kirkus Reviews

“In this beautiful debut, Jimenez boldly examines the desperate desire to fit in as an American minority living in a rich, white-dominated society. She unveils the struggles of both the upper and working classes with incredible empathy and sophistication, for a thoroughly engaging read.” —Booklist

For those who don’t need to be coddled
"Jimenez has happily and ruthlessly adorned her characters with true-to-life flaws in this hyper-real coming of age story set in New York City. Maria, a scholarship student who lives in Queens, is far out of her comfort zone attending a private high school in Manhattan where most of the girls wear Prada purses like book bags to class. She makes unlikely friends with the popular Rocky, and the two girls’ fraught friendship causes their families to become entangled. The strengths of narrator Almarie Guerra shine through in the performance here. Though there are many personalities to contend with, Guerra has an impressive ability to slip into new voices like so many worn-in pairs of shoes. The cacophony of the voices in the narration, in turn, makes the clash of worlds hit home in a real way."
—Melissa B., Audible Editor

What listeners say about They Could Have Named Her Anything

Teen Drama with a cultural twist

The characters were realistic. The theme was adult related. I know people have issues, inner battles, and points to make in their lives, but this book handled a lot of these topics and more under one book spine! The listening was at a good pace. I was not ready for the book to end, though.

I thought I would enjoy this book but boy it was a major disappointment. I tried to hang in there and listen to the entire book (i was hoping something good would happen) but I just couldn't finish it.

I wasn’t impressed with this story. I couldn’t connect with the characters and was underwhelmed. The ending was left lingering with no real direction. I expected a different story and outcome based on the blurb and reviews.