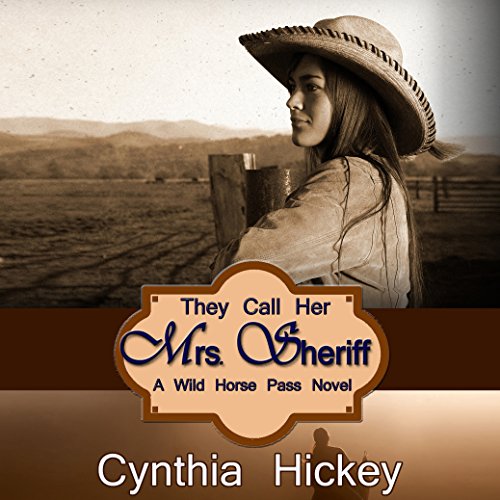 They Call Her Mrs. Sheriff

They Call Her Mrs. Sheriff

Add to Library for 1 credit

Wilhemina Jackson, widowed mother of two, answers an advertisement in the newspaper for a sheriff in Wild Horse Pass, Montana. She uses the name Willie Jack in order to disguise her identity as a woman and soon receives a telegram saying she's hired for the job. Along with her children, mother, and a giant of a dog, she loads up the wagon and makes the long ride from Kansas.

Wild Horse Pass is a picturesque town in the mountains with high standards and no law. The people are surprised to see a woman arrive as their sheriff, but are so desperate for someone to enforce the law, they decide to let her stay after she proves to them what a good shot she is with a rifle. All the former male sheriffs have always moved on to bigger and better pastures: especially since the town's people consider the sheriff's business their own and have no qualms about saying so.

Thomas Miller, livery owner and blacksmith, is ready for a sheriff to step in and take over law enforcement for the vigilantes, but he's not excited about the arrival of a leather-wearing, split-skirt, woman sheriff. Especially one pretty enough to grace a tea room back east.

No matter how quaint the town looks, Wild Horse Pass is a wild and dangerous place with many secrets. The folks may seem quirky, eccentric, and God-fearing, but their nosiness causes plenty of problems and feuds, despite the local pastor's and Tom's attempts to lead them down the right path.

Can Willie and Tom lay aside their differences to find out what really matters?

Wow! What a beautiful story. I could not stop listening as the story drew me in. Wilhelmina is such a strong lady who loves do things on her own and takes care of her family. She applies for the Sheriff job and moves her Mom and children to another town. When the town finds they hired a women they give her a trial and try to run her out of town.

Tom who owns the livery does not like Indian. He makes it known that he dislikes them since they killed him Mom when he was young. He finds he is attracted to Willie but can he over come his dislike for the Indian women?

A woman who is widowed with two children, mother and goes by the name of Willie.She needed, and was determined to provide for her family. The town had other ideas about it, she knew how to handle a rifle and was needed. Cute humorous story and enjoyed the audio narration of it. Given audio for my voluntary review and my honest opinion

Excellent plot and delightful characters and then, in the middle, it felt like a fifth grader hacked into Hickey’s computer and wrote a few scenes . I almost deleted the book but hung in, and finally the excellent plot returned . Maybe the illustrator messed up a couple of characters an d sometimes hurt the book, but other voices were very well done, especially MRS Sheriff and her deputy. Nice presentation of sexual tension in a Christian book.

I enjoyed the audio version of this book!!

Only God could plan out the life of Willie Jack as the death of her husband and the need to provide for her family take her to the small town of Wild Horse Pass to be the Sheriff! Will the town accept a woman sheriff, can she make this town her home? Is there love out there waiting for her? Will she ever be able to share her burdens with another?
A very well written story of breaking society rules in lieu of the path God has created you for!!

a widow with two small children and mother move to small town in montana. the town has hired her as sheriff no knowing she was a woman since she went by the shortened name of willie. a fabulous shot, she is better than the town's best shot. evil men shoot at and wound her as she investigates and tries to close down these men's still. the town learns she is the best sheriff they have ever had and they eventually support her 100%. the town aligns themselves with her to protect her and the town against the evil men. she and her mother fall in love...and get married to wonderful men...sweet romance and no illicit sex. great story that will keep your attention the further the story develops. I highly recommend this book!!