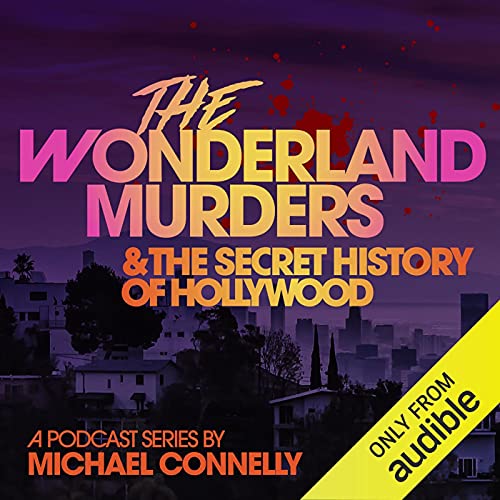 The Wonderland Murders & the Secret History of Hollywood

In this documentary podcast, best-selling crime novelist Michael Connelly returns to his roots in journalism and examines the Wonderland Murders, an iconic and brutal mass murder in a city known for its murders. Named for the street in Laurel Canyon where the murders took place inside the house of a small-time drug gang, it’s a gruesome crime that reflected its time, disrupted a mythology and tells a broader story of Los Angeles, the American dream machine, and when justice does - and doesn’t - work. And for the first time, the podcast accesses never revealed records and exclusive interviews with investigators, prosecutors and a notorious, “missing” witness who puts all the pieces together.
©2021 Miziker Content (P)2021 Audible Originals, LLC

Interview: Down the Rabbit Hole of a Notorious Hollywood Crime with Michael Connelly

'I just started feeling like I wanted to tell true stories again...'
-0.00

About the Creator and Host

Michael Connelly was born in Philadelphia on July 21, 1956. He moved to Florida with his family when he was 12. He decided to become a writer after discovering the books of Raymond Chandler while attending the University of Florida. Once he decided on this direction he chose a major in journalism and a minor in creative writing—a curriculum in which one of his teachers was novelist Harry Crews.
After graduating in 1980, Connelly worked at newspapers in Daytona Beach and Fort Lauderdale, Florida, primarily specializing in the crime beat. In Fort Lauderdale he wrote about police and crime during the height of the murder and violence wave that rolled over South Florida during the so-called cocaine wars. In 1986, he and two other reporters spent several months interviewing survivors of a major airline crash. They wrote a magazine story on the crash and the survivors, which was short-listed for the Pulitzer Prize for feature writing. The magazine story also moved Connelly into the upper levels of journalism, landing him a job as a crime reporter for the Los Angeles Times and bringing him to the city of which his literary hero, Chandler, had written.
Connelly is the best-selling author of 36 and one work of nonfiction. With over 80 million copies of his books sold worldwide and translated into 40 foreign languages, he is one of the most successful writers working today. His very first novel, The Black Echo, won the prestigious Mystery Writers of America Edgar Award for Best First Novel in 1992. In 2002, Clint Eastwood directed and starred in the movie adaptation of Connelly’s 1998 novel, Blood Work. In March 2011, the movie adaptation of his #1 best-selling novel The Lincoln Lawyer, hit theaters worldwide starring Matthew McConaughey as Mickey Haller. His most recent #1 New York Times best sellers include Dark Sacred Night, Two Kinds Of Truth, The Late Show, The Wrong Side Of Goodbye, The Crossing, The Burning Room, The Gods of Guilt, and The Black Box. Connelly’s crime fiction career was honored with the Diamond Dagger from the Crime Writers’ Association in 2018.
Connelly is the executive producer of Bosch, an Amazon Studios original drama series based on his best-selling character Harry Bosch, starring Titus Welliver. Bosch streams on Amazon Prime Video. He is the creator and host of the podcast Murder Book. He is also the executive producer of the documentary films Sound of Redemption: The Frank Morgan Story and Tales of the American. He spends his time in California and Florida.

So far so good! I like the interviews with all the people still alive in this case. Great investigation skills on the part of reporter.

I couldnt make it through the first episode; what a waste of a good story. Every person who speaks desperately needs coaching--did anyone listen to this with a critical ear before releasing it? Also the script is terrible; totally overwritten.. It takes them FOREVER to get to the actual story, too much monotone rambling about Laurel Canyon and sunsets and "grass" smoking ??? blah blah blah.

rather dull delivery. the story itself is interesting but delivery leaves a lot to be desired

Not a review, but a correction of fact. The Manson murders were NOT in Beverly Glen; Cielo Dr. is in Benedict Canyon.

It sounds like the narrator is drunk and about to fall asleep... Very dry podcast. There are others out there on this subject with great production and put this one to shame.

Second podcast I tried on here. Probably the last. I’ll stick to my podcasts app. Very boring to listen to.

I love it all~

This is great. I love seedy Hollywood stories, and this true crime podcast really fits the bill. I've been a Michael Connelly fan for ages, and his growly voice just adds dimension to The Wonderland Murders, like you're sitting across from him in the back of a dark bar listening to him talk.
Hearing from the people involved with law enforcement at the time and this case in particular makes this listen even more interesting and enjoyable. Just finished Ep5; on the edge of my seat waiting for Ep6 to come out!

Can’t review what I can’t finish - there are only 5 episodes here. I’m really disappointed!

If your a fan of Bosch or any of Michaels other characters this is for you. It's a brilliant podcast well worth the listen