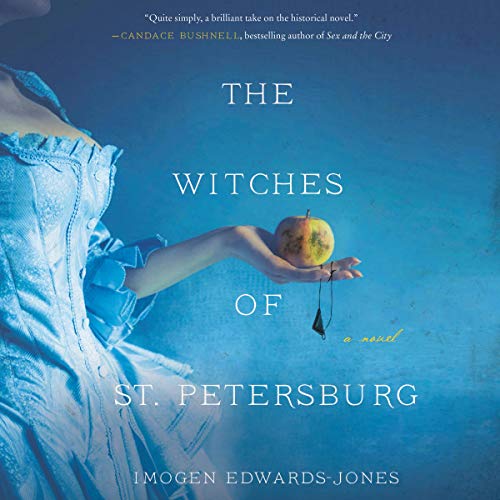 The Witches of St. Petersburg

By: Imogen Edwards-Jones
Narrated by: Kathleen Gati
Try for $0.00

Inspired by real characters, this transporting historical fiction debut spins the fascinating story of two princesses in the Romanov court who practiced black magic, befriended the Tsarina, and invited Rasputin into their lives - forever changing the course of Russian history.

As daughters of the impoverished King of Montenegro, Militza and Stana must fulfill their duty to their father and leave their beloved home for St. Petersburg to be married into senior positions in the Romanov court. For their new alliances to the Russian nobility will help secure the future of the sisters’ native country. Immediately, Militza and Stana feel like outcasts as the aristocracy shuns them for their provincial ways and for dabbling in the occult. Undeterred, the sisters become resolved to make their mark by falling in with the lonely, depressed Tsarina Alexandra, who - as an Anglo-German - is also an outsider and is not fully accepted by members of the court. After numerous failed attempts to precipitate the birth of a son and heir, the Tsarina is desperate and decides to place her faith in the sisters’ expertise with black magic.

Promising the Tsarina that they will be able to secure an heir for the Russian dynasty, Militza and Stana hold séances and experiment with rituals and spells. Gurus, clairvoyants, holy fools, and charlatans all try their luck. The closer they become to the Tsarina and the royal family, the more their status - and power - is elevated. But when the sisters invoke a spiritual shaman, who goes by the name of Rasputin, the die is cast. For they have not only irrevocably sealed their own fates - but also that of Russia itself.

Brimming with black magic, sex, and intrigue, The Witches of St. Petersburg is an exquisite historical fiction debut novel filled with lush historical details from the Romanov era.

Supplemental enhancement PDF accompanies the audiobook. PLEASE NOTE: When you purchase this title, the accompanying PDF will be available in your Audible Library along with the audio.

What listeners say about The Witches of St. Petersburg

I found this book difficult to follow- as there are lots of new characters constantly introduced. Also the magic and spell-casting sections gave me the creeps. I’m someone who usually enjoys sci-fi and magic, but the magic in this book felt really dark and was disturbing to me. I don’t recommend it for anyone who’s sensitive to spiritual things.

I really, really wanted to enjoy this book and at first I thought it was gonna all work out okay, but about halfway through it was a struggle and once I only had 3 or so hours left, I just had to give up. I just could. not. do. it. And historical fiction is my jam and still, just don't.

I see so many negative reviews for this and I have to put in my two cents. I thought it was beautifully written and I loved the descriptions of the witchcraft. It was handled in a way that was very much rooted in reality, not so much in fantasy as are most "witch" themed books. I absolutely loved reading it. I would give it five stars, but I marked one down for a historical inaccuracy that (without spoiling anything) made my Romanov-obsessed soul hurt a little. That said, I liked the book so much that I was willing to keep reading despite that, which says a lot. All in all one of my favorite books I've ever read and I thought the reader did great as well.

I absolutely loved this story. The narrator was wonderful. I'll be looking for more titles by this author.

Beautiful descriptions, style made it hard to empathize with characters

Scenes were very beautifully described, and an interesting story, but I never felt connected to any of the characters. Most of the second half was basically cringing at how gross Rasputin was, zero idea why the very graphic sex scene with the most disgusting character in the book was in there after having no hint of anything like that for most of the book. The ending also felt anti-climactic. We spend the whole book on her relationship with the Tsarina, and her obsession with power, and then...nothing? Not a word about the consequences? Nothing about the tsarina’s feelings of betrayal, the loss of Militza’s title and power, no resolution whatsoever to any of the character arcs?

The story started out okay. The character development over the decades was pretty good. I understand the author wanted to show readers how wild Rasputin was compared to the rest of the population and highlight his vulgarity, but honestly, I thought the sex scenes were way overdone in the last 1/3 of the novel. It was a huge turn off and made it hard to finish the book, especially since the beginning was good.

This is a lovely MAGNIFICENT, even, treatment of the mysterious and tragic time of the last Czar of Russia and his family. So much truth is woven into the fiction as to make it masterfully believable. Bravo, madame! Bravo- I intend to listen again soon.

I could not finish the book i became disinterested in the store before it even started.

I thought that this book went on a little bit to long. Somethings could have been summed up with a lot less. I thought it was pretty hard to keep track of characters and it made it boring for me.