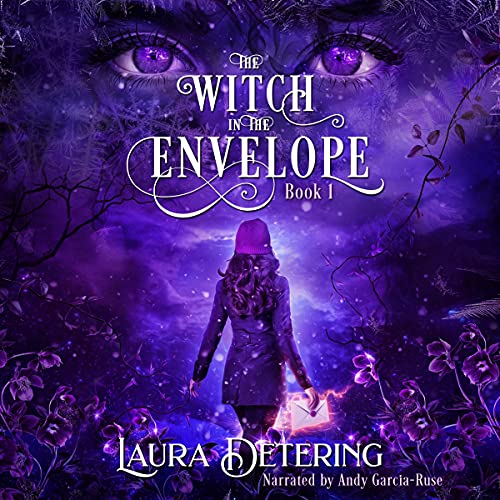 The Witch in the Envelope

By: Laura Detering
Narrated by: Andy Garcia-Ruse
Try for $0.00

Book one in a three-book series!

Escape to 1998! The Witch in the Envelope is addictive, romantic, and an unexpected fantasy with a flurry of holiday mysteries perfect for fans of Stephanie Meyer, Tracy Wolff, and Kristin Cashore.

As a child, nightmares of a hauntingly beautiful, yet vicious witch plagued Liddy Erickson. But when she wakes one morning with a deep gash on her chest in the same place the witch attacked her, she realizes these were no ordinary dreams. Shortly after she confides in her best friend, Will, his entire family disappears along with her memories of them.

It’s now 1998, and 17-year-old Liddy has one goal: to move out of the cold Chicago suburbs after graduation. Two things that are not in her perfectly planned life: fun and dating. That is until the new transfer student catches the eye of every girl at Wheeling High School. With intriguing scars and eyes that seem to glow, he awakens something inexplicable in Liddy and proves to know her even better than her closest friends. This forbidden attraction could be her greatest downfall...or her saving grace. When a stranger with a distinct melodic chime to his walk saves Liddy from opening an enchanted envelope, he reveals an outrageous claim that she is a lost Watcher and the saving grace for their homeland, Cristes. As Christmas draws near, Liddy must decide if she can trust the stranger’s orders or risk condemning an entire nation.

What listeners say about The Witch in the Envelope

Is there a sequel?

I would have rated it higher except that it didn't have an ending. Even books with sequels should have an ending! The only thing driving the story is the mystery of disappearing children and it is never solved.

It felt like the book was written for 12 year olds and what they think teenagers do and how they talk. The dialog was just off, even placing it in 1998. Still, the story had a cute premise.

Wowww, this author is definitely a new favorite.

This book gripped me instantly, and still, only managed to grow even MORE gripping as it went on. The MCs are highly relatable.

This is set in the real world, present day, but there’s definitely something supernatural going on … the question is, what exactly? Just the right amount of mysterious that I’m intrigued, but not bothering to try to predict it, because I’m so engrossed in Lydia’s life, etc. I just … enjoyed it and lived it and found myself in a world I never wanted to leave.

Much of it is set in high school and it’s all very plausible, but an easy read, complete with mean girls, creepy guys, jocks … it took me back a little but mostly I was just engrossed in their world.

In addition to mystery and a bit of nostalgia, this book also packs action, real feels, young love, friendship & loyalty, adventure, Christmas feel (at times) and more. Absolutely dying for the next book in this series.


Note:
I listened to the audiobook and this narrator is great. She’s got a great voice, easy to listen to, uses appropriate tones … I’d absolutely listen to more from her.