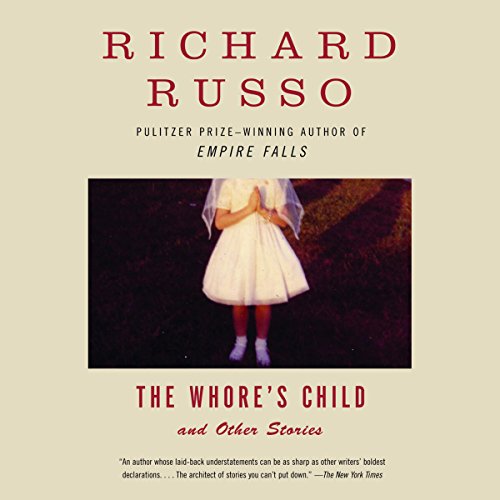 The Whore's Child and Other Stories

To this irresistible debut collection of short stories, Richard Russo brings the same bittersweet wit, deep knowledge of human nature, and spellbinding narrative gifts that distinguish his best-selling novels. His themes are the imperfect bargains of marriage; the discoveries and disillusionments of childhood; the unwinnable battles men and women insist on fighting with the past.

A cynical Hollywood moviemaker confronts his dead wife’s lover and abruptly realizes the depth of his own passion. As his parents’ marriage disintegrates, a precocious fifth-grader distracts himself with meditations on baseball, spaghetti, and his place in the universe. And in the title story, an elderly nun enters a college creative-writing class and plays havoc with its tidy notions of fact and fiction.

The Whore’s Child is further proof that Russo is one of the finest writers we have, unsparingly truthful yet hugely compassionate.

“An author whose laid-back understatements can be as sharp as other writers’ boldest declarations…. the architect of stories you can’t put down.” ( The New York Times)
“[Russo] has joined those writers who can be said to have coined their own universe…. [He] achieves an emotional balance through his humor and generosity of spirit.” ( Chicago Sun-Times)
“The most expansive of contemporary writers.” ( The New York Times Book Review)

What listeners say about The Whore's Child and Other Stories

This is a book of short stories. All of the stories are good. With that said, there were probably two stories that, on a scale of 1 - 5 I would rate about a 3 but the rest were really interesting. As you can see it has multiple narrators which is really nice. All in all this is definitely worth the download. I listented to the stories one after the other and enjoyed them all. The last one is the longest and kindda started to lag for me so I was glad when it was over but it did hold my interest. Fortunately the narrator was good.

Richard Russo is one of my favorite authors . 😊😊

Great narrators. Kept thinking I was going to put it down, but each story made me want to hear the next one. Love the mix of humor and truth.

Nearly as good as his novels

If you haven't read or listened to any of Russo's novels, I would strongly recommend starting there. If you have, do continue with these stories. They aren't as good, but the novels set an impossibly high standard. Do be aware, that the narrators, who are different in each story, are a mixed bunch, whereas the novels are all brilliantly read on audible.

Oddly enough the title story was my least favourite so please don't be put off if it doesn't quite grab you.