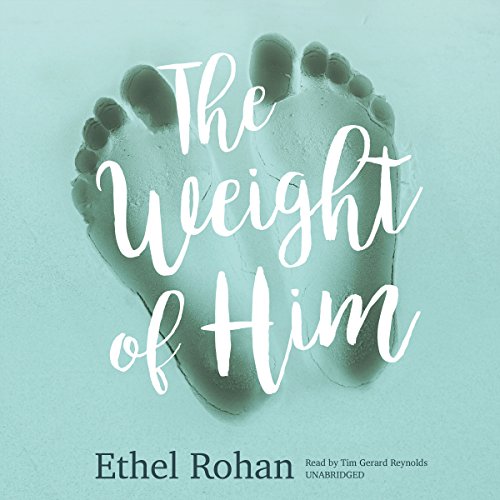 The Weight of Him

The Weight of Him

At 400 pounds, Billy Brennan can always count on food. From his earliest memories, he has loved food's colors, textures, and tastes. The way flavors go off in his mouth. How food keeps his mind still and his bad feelings quiet. Food has always made everything better, until the day Billy's beloved son, Michael, takes his own life.

In Michael's memory, Billy determines to make a difference and undertakes a public weight-loss campaign to raise money for suicide prevention - his first step in an ambitious plan to save himself and others. However, Billy's dramatic crusade appalls his family, who simply want to get on with their lives. Despite his crushing detractors, Billy garners welcome allies: his community, a coworker who lost his father to suicide, and a filmmaker with his own dubious agenda, as well as a secret miniature kingdom that Billy populates with the subquality dolls and soldiers he rescues from disposal at the local toy factory where he works. But it is only if Billy can confront the truth of his pain and suffering and the brokenness around him that he and others will see the change they need.

Set in rural contemporary Ireland, The Weight of Him is an unforgettable, bighearted novel about loss and reliance that moves from tragedy to recrimination to what can be achieved when we truly decide to take a stand.

A very touching and enlightening story that made me search deep within myself. I highly recommend this story.

The Weight of Him is a novel of emotional integrity and courage. It is a profoundly poignant drama with great wisdom and insight. Rohan’s writing is vivid and generous that captures the tone of scenery, time, character, and space. The characters are painted compellingly and distinctively. This novel puts Rohan in the same conversation with John Banville, Donal Ryan, Sebastian Barry, Roddy Doyle. The writing is masterful. The plot is heartbreaking and inspiring. The story is entertaining I am reminded of Judith Guest’s 1970’sish novel Ordinary People.

No pun intended- but this book weighed quite heavily on me. The book handles extremely hard topics very well, but the pacing of the book made me feel like there was an imbalance of rushed moments and moments that dragged on and a bit of strange time jumping. Besides this though, the book was really emotionally powerful.

Where does The Weight of Him rank among all the audiobooks you’ve listened to so far?

I would rank in the 40th percentile. I have listened to so many, that's the only way I know how to rate it.

What other book might you compare The Weight of Him to and why?

No other books I've listened to.

I believe Tim Gerard Reynolds added a lot to this book. I dont believe it's one I could've stuck with if reading.

I believe it did make me tear up a little. The story is about a son who commits suicide , the family is clueless. The father is determined to make it his fault.

The Dad in the book comes up with a unique way to try and increase awareness of suicide among teens especially. Despite ridicule from family and friends he trudges on. It's very endearing how positive his attitude and self restraint make Him very loveable.