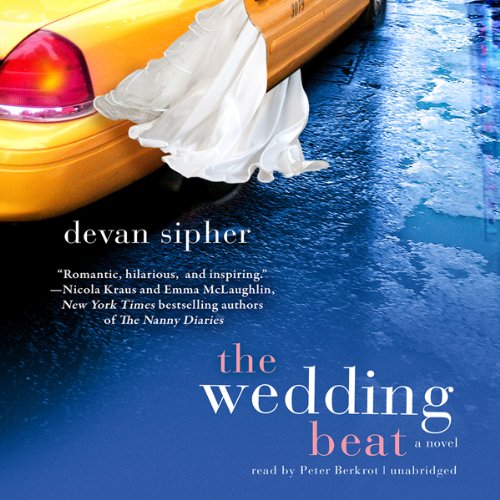 By: Devan Sipher
Narrated by: Peter Berkrot
Length: 7 hrs and 7 mins
Categories: Fiction, Contemporary
3.5 out of 5 stars 3.4 (177 ratings)
This title is included in Audible Escape

Sometimes the best man isn’t even in the wedding party.

Gavin Greene is a hopeless romantic. He’s also a professional one: He writes the wedding column for a Pulitzer Prize-winning newspaper, covering spectacular parties from coast to coast. But there’s a thin line between being a hotshot reporter on assignment and being a single guy alone on a Saturday night at someone else’s wedding.

Everything changes on New Year’s Eve when Gavin meets Melinda, a travel writer with enchanting dimples. A moonlit stroll across a Manhattan rooftop seals the deal - until an Aussie with an attitude swoops in and whisks her away before Gavin gets her number.

Gavin crisscrosses New York City to find her again and learns that there’s something worse than losing the woman of his dreams: having to write an article about her wedding.

Devan Sipher has been writing about weddings for the New York Times’ Vows column for more than five years. He received a master of fine arts degree from the Tisch School of the Arts at New York University. He lives in New York City and is still single.

The Wedding Beat was well written, although, somewhat painful to read...Kind of like a trip to the dentist. The agony...I would have preferred a bandaide being ripped off! At lease the pain would have been short-lived. This poor guy struggled more than he should have. Life is just not that complicated.

I have not listened to Peter Berkrot prior to this. He has a nice voice and I liked his performance.

Did The Wedding Beat inspire you to do anything?

I tried 3 different times to listen to this book. I even went to the beginning and see if I missed something but an hour into the book I just couldn't continue. I don't know if it was the slow pace, the main character seemed wimpy to me or the narrator but I just couldn't finish the book.

What disappointed you about The Wedding Beat?

I couldn't finish this book. I became tired early on of this nebbish kvetching---which he does continually throughout the book. My reaction to the protagonist's annoying internal thoughts (which was what most of the book was) was like nails on a chalk board. I wanted to tell him to just shut up and get on with it. Also I didn't find the humor all that funny and the romance wasn't very romantic. It was actually rather sad. About half-way through I gave up and quit. I gather most people liked this book which I don't understand. Maybe if you listen to the sample you can tell whether you find the protagonist off-putting.

Has The Wedding Beat turned you off from other books in this genre?

Would you be willing to try another one of Peter Berkrot’s performances?

This book was terrible!! I think the author was trying to write the main character as a romantic, but he was such a heel.... really annoying!! The narrator didn't help, because read gave him the voice of a middle aged, sad sap man--not someone I want to spend time with as a listener.

THe only nice thing I can say about this book is that I was able to finish it.

Excellent writing, but not a romance novel.

Perhaps my mistake was to believe this was a romance novel, but without a doubt the writer is extremely talented.

I don’t believe I’ve ever read a romance novel with this type of almost flawless writing detail and use of such extensive vocabulary. At times I wasn’t sure if I should feel challenged or insulted. If someone reading this review aspires to enhance their vocabulary, I would HIGHLY recommend this book. It’s a light read and yet still manages to provide plenty in the way of descriptive narrative.

The romance portion of this novel is sorely lacking. The book is more about a lonely (rather sad and desperate) guy than it is about his pursuit of a woman. The protagonist’s “love of his life” is actually missing from a large portion of the book; at times almost forgotten. As other reviewers have stated, the book is almost depressing.

Although it’s refreshing to hear a man’s perspective and to hear it from a regular guy just looking for someone to love and love him back, most readers of romance aren’t looking for something THAT real. I personally don’t want to read (repeatedly) about a guy with a small neck that has some serious insecurity issues (he frequently second-guesses himself because he realizes he’s being too wimpy or sounding weak). Sure, there are plenty of men out there that are lacking in presentation and do not present themselves with a strong sense of stereotypical masculinity, and although that’s okay in the real world, it’s not what we desire in our romance novels. I don’t believe anyone has ever said wimpy was sexy or romantic.

I can agree with the critics that say the book is sharp, fresh, delightful (at times), and without a doubt poignant, but I cannot say it was hilarious (although facetious), and I definitely cannot say it was romantic and inspiring.

The author writes very well. The story is dreary. This novel should not be considered romance genre.

Would have given 3 1/2 Stars if possible

I hovered back and forth on the overall rating between 3 and 4 stars. While the story was good, I felt almost depressed at the bad luck of the main character, Gavin. He could not catch a break and it got a little wearisome. That could have been made up for in a spectacular "guy gets the girl" ending, but even the confrontation at the end was a little pathetic. A good resolution came in the final third of the "Epilogue." That wasn't enough happiness to counteract the problems faced, the off-timing, the bloodshed, etc. Plus I wanted to know more about how they got to where they were in the "Epilogue." I felt after all I had invested into the story, I was missing some information that I deserved to know. I did like best friend Hope and her story with AJ. That added a nice/funny twist in the story. The couples Gavin interviewed were interesting. Gavin's grandmother was very sweet. The narrator did a fine job. A good listen, especially if you are drawn to rooting for the underdog. So while three stars may seem harsh for a good book, I just couldn't bring myself to rate it four stars due to my wanting to slap some sense into Gavin and yell something to him about seizing his destiny. We don't do that to fictional characters.

This is a very new york story ... light and familiar. loses a bit of steam in the home stretch, though. the narration was the best part ... he is excellent. overall i would recommend.

Exactly what you would expect. Fun to listen to.

If you could sum up The Wedding Beat in three words, what would they be?

Fun to listen to.

Exactly what you would expect.

The voices were done well enough to distinguish.

I hated this book

I thought this was the worst book!! I didn’t like the main characters at all. I felt like if I knew him in real life I would hit him with my car!! It wasn’t romantic or funny.

if the main character mentioned one more time about worrying about layoffs, I was going to have to stop listening. I did not enjoy listening to the anxiety ridden main character complain and fuss over and over. The one twist in the story was so briefly mentioned it would be easy to miss. The epilogue usually describes happily ever after but instead led to more questions.