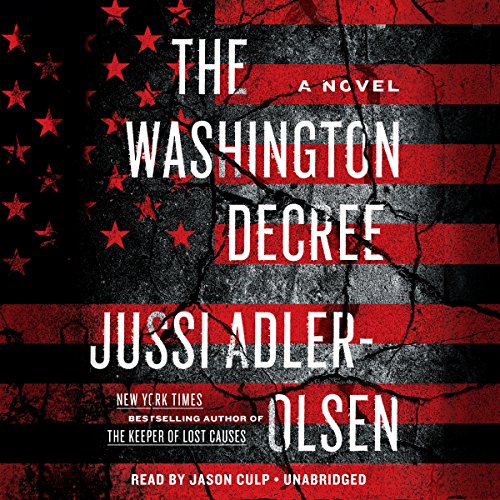 The New York Times and number one internationally best-selling author of the Department Q series is back, with a terrifyingly relevant stand-alone novel about an America in chaos.

"The president has gone way too far.... These are practically dictatorial methods we're talking about."

For Doggie, who worked the campaign trail with Wesley, Jansen's election is a personal victory: a job in the White House, proof to her Republican father that she was right to support Jansen, and the rise of an intelligent, clear-headed leader with her same ideals. But the triumph is short-lived: Jansen's pregnant wife is assassinated on election night, and the alleged mastermind behind the shooting is none other than Doggie's own father.

When Jansen ascends to the White House, he is a changed man, determined to end gun violence by any means necessary. Rights are taken away as quickly as weapons. International travel becomes impossible. Checkpoints and roadblocks destroy infrastructure. The media is censored. Militias declare civil war on the government. The country is in chaos, and Jansen's former friends each find themselves fighting a very different battle, for themselves, their rights, their country...and, in Doggie's case, the life of her father, who just may be innocent.

“Adler-Olsen writes as if he’s lived in the United States his entire life, and the novel reads as if it were written recently, not years ago. This thought-provoking and timely political thriller shows the author can craft more than compelling crime scenarios.” (Associated Press)

“A tantalizing and timely premise makes this political thriller one of those all-too-real scenarios that leave you thinking once you’re done. Spicy, smart, and entertaining.” (Steve Berry, New York Times best-selling author)

What listeners say about The Washington Decree

Fan of Dep't Q, but "Decree" bombs - it's horrible

Frustratingly absurd and uninformed. Too many mistakes to make it readable.

I have enjoyed Jussi Adler-Olsen's books, so the author's branching into U.S. politics for a thriller seemed like a fun departure from Dep't Q. I love a good conspiracy/thriller and enjoy Mr. Adler-Olsen's ability to create interesting characters and plot lines. Naturally I purchased this book as soon as became available in English. BIG MISTAKE.

The Washington Decree is comically frustrating in its failure to understand the simplest, most basic, and fundamental aspects, laws, history, practical operation and facts regarding:
1. The U.S. media;
2. The general U.S. political process and particularly the the presidential election process, including the political parties' primaries/caucuses; and the general election;
3. Fundamental bureaucratic & governmental processes at the federal level and the state level (particularly the State of Virginia which figures prominently in the book);
4. U.S. President and Presidential candidate federal security laws, requirements, institutions and practices;
5. Congress' constitutional duties as well as its practical operation, traditional role and its normal operation.
6. The relationship among the three branches of federal government in both "normal" times and periods of "national emergency," to the extent they differ.
7. Normal White House and, specifically West Wing, jobs, practices, operations and personnel duties.
8. The clearly delineated and specific Constitutional and statutory process governing the Presidential line of succession;
9. The role of U.S. federal agencies and their enabling legislation, authority, budgets, etc. -- PARTICULARLY the federal emergency management agency (FEMA).
Especially relative to FEMA, the author presents a completely fictionalized description of the agency's (a) personnel, (b) budget, (c) expertise & infrastructure/assets/equipment; and (d) the book completely misrepresents FEMA's congressionally authorized (and funded) scope of authority. The author has, effectively, created from whole cloth a federal agency that even the most deranged, paranoid, straight-jacketed, mentally challenged & babbling conspiracy fantasist could possibly believe exists -- even while drooling under the influence of the most exotic cocktail of psychotropic pharmaceuticals. The author's description of FEMA, and its (non)enabling statutes is, genuinely, that extreme.
10. Enough already, I'm stopping, literally, at the tip of the phantasmagoric iceberg.

Artistic license, bending truth and asking a readers to suspend disbelief are part of the process for fiction writers: particularly those writers who create thrillers. That is not, however, the situation in "The Washington Decree." Rather, and in addition to its factual errors, the book is further undermined by the inclusion, apparently for the reader's convenience, a reference Appendix. The Appendix, rather than offering the reader historical or legal background, is almost complete fiction. It begins, for instance, by stating "FEMA was created by executive order of President Nixon" and subsequent Presidents granted additional "powers" by executive orders/decrees. Not true. In fact, Congress - not President Nixon - created FEMA through the regular legislative process in 1974. Next, President Nixon signed the congressional FEMA legislation into law. Similarly, Congress reorganized the agency in the late '70s, and President Carter signed the updated legislation detailing FEMA's responsibilities. FEMA continues to be enabled, statutorily governed and funded by Congress. Despite this, in the book's factual "Appendix," Mr. Adler-Olsen claims FEMA has no statutory authority, was not created by Congress and further states the agency derives all its authority solely from Presidential Executive Orders. All patently false statements. Furthermore, the book's Appendix states, after fabricating a FEMA "creation myth," that FEMA also has the authority to suspend the U.S. Constitution. Believe that whopper, and I have a bridge to sell you.

Similar to the ahistorical description of FEMA's statutes and funding, "The Washington Decree's" reference Appendix lists multiple government documents and executive orders to which the author writes his own paraphrased brief explanation of how these documents control the U.S government. Essentially, the paraphrased analysis of each Executive Order in the Appendix claims that these "Orders" authorize a shadow government that can take, control, impound or imprison all persons and property as well as suspend/revoke every state and federal statute, confiscate all private property, ignore citizen rights, privileges personal freedoms, cease any government function. To ice the cake, the author asserts these Orders empower FEMA to suspend the U.S. constitution.

"The Washington Decree's" reference Appendix is presented as the "factual" and "legal" basis for the book's fictional story. However, the Appendix is only a list of existing public documents, which are relayed via excessively imaginative paraphrasing. Even artistic license does not extend to claiming these public documents say or do the opposite of what they actually say or are intended to do.

The factual, practical and legal misunderstandings of the how the branches of government, the media, the military and various agencies operate, either individually or in relation to each other, make it impossible to appreciate this book as either a conspiracy thriller or mere frightening political fantasy.

After several decades and thousands physical and now audible books, I don't believe I have ever felt compelled to write a book review. My surprise at the excessive number, and extreme nature, of the factual errors (i.e. fiction presented as "fact" and used to underline the story) is too egregious to ignore. Particularly when the misapprehensions and historical falsehoods emanate from such a well recognized and best-selling author; and and author whom I otherwise hold in high regard.

Can't wait for the next Dep't Q book.

A poor imitation of Grisham

I love the Department Q series and began the Washington Decree with great anticipation.
It is hard to believe that this book was written by the same author. No finesse, no complexity, poorly developed characters and a plot that raises the eyebrows in skepticism at every turn.
Stick to Denmark Jussi, and to Carl, Assad and Rose

I'm a fan of the Department Q novels and also of Adler-Olsen's first novel, Alphabet House, but The Washington Decree is dreck and this performance by Jason Culp is hardly better. This long novel includes not one interesting/sympathetic character. The main characters who are supposed to be sympathetic are mere caricatures and never evoke a sense of reality; so we never really care when they avoid capture or succeed in their pursuits. In fact, the caricatures are so broad that they seem like parodic. The plot is unconvincing in its rush to deliver its dystopian vision. The author has a few too many slips in which his lack of familiarity with American government show. (And the translator may have contributed to that.) The reader presents almost every character as having a Southern accent though the text suggests only three or four members of this enormous cast are from the South; and the presentation of African-American voices is offensive.

I'm two-thirds of the way through the 22-hour listen and have decided to abandon it. I just don't care about what lies in the final third.

I have enjoyed this authors books in the past and was excited for a new story, but this was a disappointment. The story was not well developed, shallow and predictable. It was also without the humor I’ve enjoyed previously from the writer. The narration was also unfortunate, at times almost unbelievable in the assumed regional accents.

I have read all of Adler-Olsen's Department Q books and have liked every one of them, so I was excited to find a new title. This one really falls flat. The main female character is named "Doggy". Yikes! Whose idea was that? The plot line had a lot of potential, but the prose was so bad! Choices of idioms were almost laughable at times. The political scene seemed unrealistic and uninformed. The "good guys" and the "bad guys" were flat and predictable. And the narrator did nothing to punch this up..

I eagerly await the next Department Q installment. This one was a bad idea.

I have never written a review before. I love love love Olsen's Dept. Q novels. Great characters that develop naturally throughout the series, plots that surprise the reader, and such intelligence in the writing. Wonderful. The Washington Decree had NONE of these qualities. The characters were shallow, unrealistic events and vague explanations did not seem to me written by the same person at all. Such a disappointment. Olsen would do much better that whomever penned this.

So glad its over

Jussi Adler Olsen is a brilliant writer. The Q series and the Alphabet house are just great but better leave this one alone. Flimsy, predictable and faaaaar too long for such a weak story. Performance didn’t help either. Please Jussi ignore the American market and write another brilliant European novel (preferably read by Steven Pacey)

I was surprised I thought this book might be interesting. I have enjoyed the authors prior works.The Performance was questionable. The story was long and unreasonably drawn out. The character development was unimpressive.

This is not Jussi Adler-Olsen"s best work. There were inconsistencies and characters behaving stupidly, as in no reasonable person would have done the activity or believed what another character was telling them. too much handwringing and soap opera.

I am a big fan of Jussi's books so I am disappointed.

I think that Jussi Adler Olsen should stick to Dept. Q. I also hope that DJT never reads this.