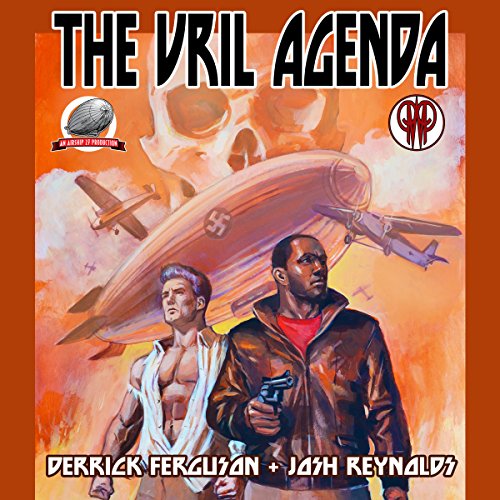 By: Joshua Reynolds,Derrick Ferguson
Narrated by: Bob Kern
Try for $0.00

Two Legendary Heroes Come Together to Defeat the Vril Agenda

Upon completing his training with the Warmasters of Shamballah, Dillon journeys back to America to begin the next phase of his training under tutelage of one of the greatest adventurers of all time, Jim Anthony - the Super Detective. But no sooner do they meet then one of Anthony's most dangerous villains resurface from his past to once again threaten mankind, the superhuman Sun Koh - prince of Atlantis. Now the old warrior and his young student, aided by Anthony's loyal family and allies, will take on this new threat, pitting their lives against powerful adversaries. From New York to Berlin and then on to a hidden civilization at the bottom of the world, the Super Detective and his two-fisted protégé must stop the fiendish Sun Koh before he can unlock the ages old secret of the Vril power. Writers Josh Reynold and Derrick Ferguson have whipped up a frenetically paced tale that never lets up for a second, masterfully delivering old fashioned pulp action in what is sure to become a new pulp classic! An airship 27 production!

What listeners say about The Vril Agenda

A team-up between Dillon and an aged and retired, but neither ineffective nor forgotten Jim Anthony! I will say, I keep expecting more from Dillon...but he is young and learning...so I hope for great deeds from him in the future. Truthfully, as satisfying as this book was...it still left a lot of unanswered questions, cryptic refferences a la Easter eggs, and dangling threads. Hope more adventures of Dillon will find their way to Audible... Narration was the usual mix of otherwise pleasant listening marred by annoying mispronunciations, weak character voices, and unaccented dialog.