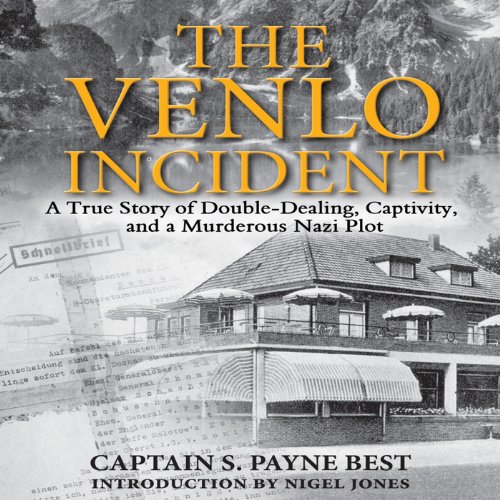 An incredible, rare glimpse into the inner world of Nazi espionage.

World War II seems to provide an endless supply of amazing true stories of heroism in the face of mortal danger. This true account of an MI6 agent's kidnapping and survival is a real-life spy thriller, and one worth knowing. On November 9, 1939, Captain Sigismund Payne Best and other members of Britain's ultra-secret Z service sat near a cafe in Venlo, The Netherlands, waiting to meet with whom supposedly-sound intelligence told them would be German resistance leaders. In reality, what they would meet at Venlo was an SS ambush - leading to the murder of Best's Z associate and the Nazis' seizure of a plain text list of British under-cover agents. It was a massive disaster for British intelligence and a crucial turning point of war-time espionage.

Best survived Venlo to tell of the shocking intelligence coups that precipitated the attack. His harrowing account of torture at the hands of the Nazis and five years in the infamous Sachenhausen and Dachau concentration camps offers unparalleled, first-hand details from inside the Third Reich. As a prisoner, he crossed paths with famous Nazi resistance fighters, including Georg Elser and Dietrich Bonhoeffer. Best's explication of top-secret spy techniques and his depiction of how the incident played out to justify Nazi aggression is military history at its finest. His memoir of espionage, survival, and captivity is a riveting narrative that listeners will not soon forget.

The pilot never shows up

I bought this book based on the description Audible provided. As a matter of fact it kept being picked up in searches for the term 'pilot', though now I realize that "Nazi pilot" is probably a typo and should read "Nazi plot".
Furthermore you will learn less about the actual Venlo incident here then you would by simply reading the Wikipedia page.

This book is actually a fascinating memoire of the writer's internment in Germany during the war, and his brave and earless struggle with the constant uncertainty as to the actual availability of tobacco.

Having said that, it is actually quite fascinating as it shows a side of WWII that you rarely hear about, the internment of VIP prisoners and their treatment. Best was obviously quite a character, making this an enjoyable listen.... Just don't wait for the pilot to show up.

Payne Best does it all

What would have made The Venlo Incident better?

Payne Best blows his horn so much. I think Hitler, Himmler & Hydrich listen to him!The book is me, me, me Payne Best. Very self serving.

What could S. Payne Best have done to make this a more enjoyable book for you?

A little bit more about others than his greatness!

This guy apparently intimated all and control the detention camp. Just ask him!