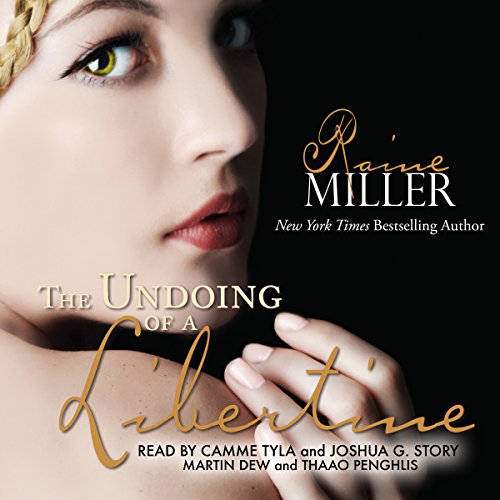 The Undoing of a Libertine

Jeremy Greymont certainly qualifies. "Sex rough and women loose" is his credo - one he's always taken very seriously, with no deference whatsoever to the society into which he's been born. He's been perfectly content milling along through life on an existence of courtesans and fine Scotch whisky...that is until his grandfather lets him know he's out of time, and his station in life comes with duties attached. Jeremy must produce an heir - posthaste. Lucky for him the lovely Georgina is the perfect answer to his predicament and intrigues him like no other woman before her. Jeremy can't wait to make her his lady and begin working on creating that heir he needs so badly. He's even willing to tone down his preference for the wild romps he's always enjoyed in the bed chamber, just for her sake. There will be plenty of time to teach his innocent bride all about that after the wedding, right? No, not even close. Georgina's demons trump Jeremy's in so many ways. A brutal assault has left her wounded and vowing she can be wife to no man - not even Jeremy Greymont. What is a libertine to do?

"Georgina...I am so entangled in thoughts of you I could not find my way out if ever I desired." (Jeremy Greymont)

What listeners say about The Undoing of a Libertine

This historical romance was about a 2.75, which is not bad. It’s a good story that makes sense and flows well. But points are deducted because the heroine, Georgina, was constantly simpering, and there was constant concern about hurting her, which made Jeremy always question himself, saying how he wasn’t good enough, etc. In conjunction with that, Georgina found more reasons to cry than any person should. Finally, as much as I love romantic words, especially from a guy, Jeremy’s romantic proclamations to Georgina were faaaaaarrrr too many and waaaaaaayyyyy over the top, while Georgina, in between her crying, said little more than “I love you.” The author tried to make Georgina appear strong in some ways, but it didn’t work for me; it wasn’t believable b/c it was too little too late when compared to how she was portrayed the other 90% of the time.

The sex scenes were plentiful and romantic, though not gratuitous or, what I would call, explicit. There was detail provided, but explicit or raw language or terms were not present. And the sex was, generally, limited to basic f/m intercourse with a drop of oral sex. But, unfortunately, the sex scenes were a primary point of the overly-wrought acts and words.

There were several narrators but only 2 primary ones, I think, who performed as Jeremy and Georgina. And that was, mainly, really great. But the female narrator could not do male characters. When she narrated Jeremy’s part, she sounded like Georgina. I struggled to tell them apart. There are many benefits to multiple narrators, most of them enjoyable. But there are some drawbacks to switching among several narrators; all of them can’t do all of the characters well. So, in this case, it can be hard to jump from one person performing the heroine to another narrator performing her.

Finally, I think that the book was a bit drawn out. On the good side is that listeners definitely know the conclusion of everything, pretty much. And the story flows well, not being too much of a love-at-first-sight type of story. Still, though this is my first book by this author, it’s also my last.

A beautiful prequel to the "Blackstone Affair " series. This book has everything you could want.... Love, romance, suspense, betrayal and regarding trust and respect and in the end.... the happily ever after that everyone craves but wholeheartedly deserves. It's a beautiful story!!!

I was hoping that the female narrator would voice the heroine and the male actor would speak the hero’s lines. Instead, they switched back and forth, so the characters had different voices throughout the book. This was annoying because, although the
female narrator was great when speaking female lines, her voice was the same whether narrating or voicing male characters.
I liked the male narrator’s accent but he mispronounced so many words (they both did), that it was comically irritating.

Very hard to finish listening to the book.
Seriously!!! It seems Joshua Story needs to drink some water or something. The noises with his mouth was very distracting.

perseverance and love between two people who have been hurting. Strong heroine, who is lucky to have her brothers childhood friend, who is a handsome rake. I loved the storyline and the narrative.
I love the Narator, his voice is so masculine and sexy and the female narrator voice! I loved her voice ♡♡♡ Ms. Raine is new to me, and I'm going to be reading her English Regency Romance

Would you listen to The Undoing of a Libertine again? Why?

What other book might you compare The Undoing of a Libertine to and why?

All the love and sex scenes were amazingly done.

It gave a nice look into the love that bloomed in Summerset. I will keep reading this series

This story started off promising enough. As someone who works with survivors of sexual assault, I found some of the story difficult to believe. Overall, it was just okay. I think I ended up fastforwarding near the end because it seemed that the hero and heroine were forever having the same exact exchange.