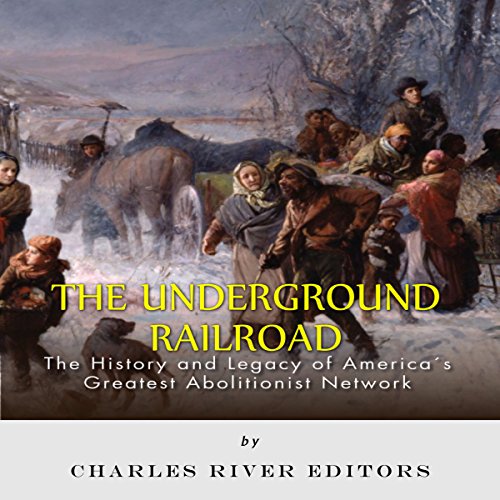 The Underground Railroad: The History and Legacy of America's Greatest Abolitionist Network

By: Charles River Editors
Narrated by: Neil Holmes
Try for $0.00

"I was the conductor of the Underground Railroad for eight years, and I can say what most conductors can't say - I never ran my train off the track and I never lost a passenger." - Harriet Tubman

The Underground Railroad is one of the topics that young schoolchildren are most often taught. Every American is familiar with the idea of fugitive slaves escaping to Canada and the North with the help of determined abolitionists and even former escaped slaves like Harriet Tubman. The secrecy involved in the Underground Railroad made it one of the most mysterious aspects of the mid-19th century in America, to the extent that claims spread that 100,000 slaves had escaped via the Underground Railroad. Of course, from a practical standpoint, the Underground Railroad had to remain covert not only for the sake of thousands of slaves, but for a small army of men and women of every race, religion and economic class who put themselves in peril on an ongoing basis throughout the first half of the 19th century, and in the years leading up to the war.

Over 150 years later, that same secrecy has helped the Underground Railroad become so romanticized and mythologized that people often visualize it in ways that were far different from reality. Before the American Civil War eliminated slavery, it was a fixture in North America for over 200 years. By 1850 a trained slave was worth approximately $2,500, around 10 times the sum of a typical annual salary in that day. As a result, the economic dependence on slavery in the South was an extreme one, and in the wake of the Fugitive Slave Act, black people in the North were under constant pressure to defend their "credentials" to bounty hunters and owners.

What listeners say about The Underground Railroad: The History and Legacy of America's Greatest Abolitionist Network