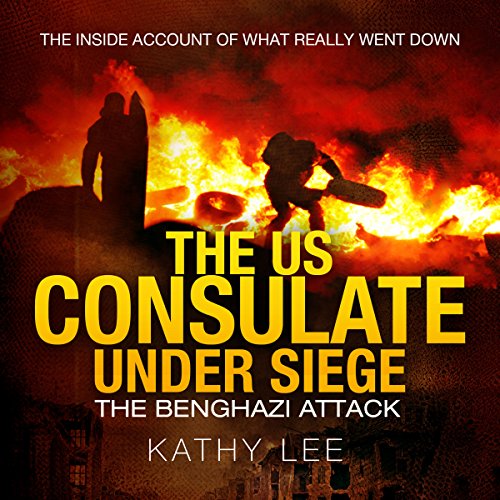 The US Consulate Under Siege: The Benghazi Attack

The Inside Account of What Really Went Down
By: Kathy Lee
Narrated by: Jim Johnston
Length: 3 hrs and 18 mins
Categories: History, Military
4.5 out of 5 stars 4.5 (2 ratings)

The US Consulate Under Siege: The Benghazi Attack

The Benghazi crisis that occurred exactly 11 years after September 11, 2001 led to the loss of the US ambassador, Christopher Stevens and, hence, stands as one of the worst attacks against the US. This book goes beyond the events of September 11, 2012. It explores what went wrong; the things that could have been prevented; the best kept secrets of CIA operations abroad; and presents recommendations that may avoid the loss of more lives as the inevitable war against terror rages on.

The first chapter presents more of a background analysis giving a backdrop of the growing tension between various nations. The attacks that occurred on the September 11 may be pegged on some issues that may have been immediate, but the root causes go way back in time. An in-depth look at Libya and Benghazi is given in the second chapter with an aim of presenting a vivid picture of the factors that may have led to the development of unrest and revolt. The next chapters focus their attention to Benghazi, the magnificent Annex, the American ambassador, the overrun, gunfighter road, and the counterattack.

It takes more than a mere description of tragedies to help listeners learn from the mistakes that occur during terror attacks. For every government agent who might be involved in saving lives - or conveying critical intelligence - or knows someone who is involved in US foreign relations - here is the book that encompasses important aspects that they should not miss. This book is written in a modern, conversational style. It is easy to understand, yet its message is solid, accurate, and greatly informed.