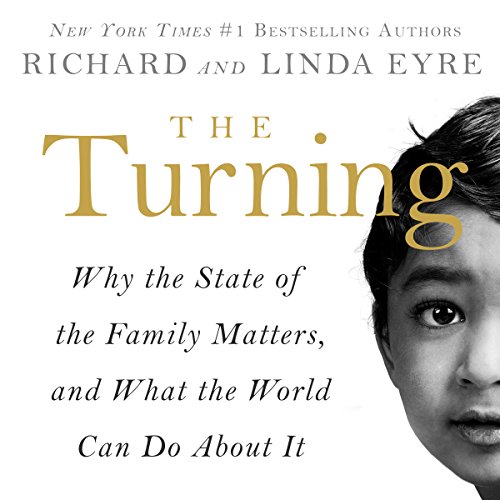 By: Richard Eyre,Linda Eyre
Narrated by: Benjamin Pacini
Try for $0.00

It is easy to find alarming statistics on escalating violence, addiction, and economic inequality in developed countries and stubborn poverty in the third world. The fascinating question has to do with cause. New York Times number-one best-selling authors Richard and Linda Eyre's new audiobook The Turning: Why the State of the Family Matters and What the World Can Do About It contends that the social and economic challenges faced not only in the United States, but throughout the world, are the direct result of an unprecedented and widespread turning away from family. The negative effects of this turning are apparent in the youth of the world today:

The Turning uses research findings, statistics (like those listed above), and the Eyre's personal experiences at home and abroad to show that families are essential to the survival and success of civilization.

With the well-being of the world at risk, The Turning will move listeners in a way that will raise personal reflection, discussion, and action to return the family to its necessary position as the recognized and prioritized basic unit of society.

As Thomas Friedman's The World is Flat opened our eyes to the cause-and-effect aspects of the global economy, The Turning will open the eyes of listeners across the world to the means-and-ends connections between stable families and households and the world's.

What listeners say about The Turning

Great book!! It inspires one to want to improve family life, not just for oneself but for other families as well.