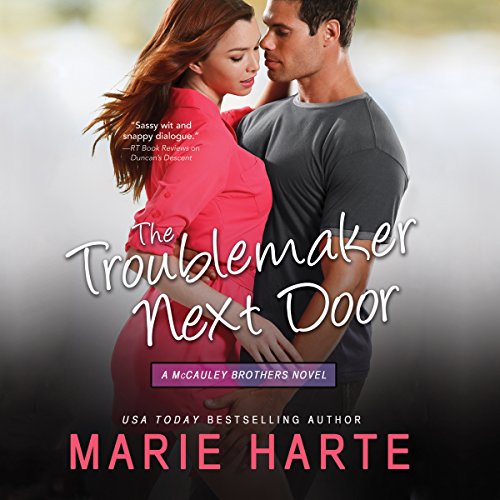 The Troublemaker Next Door

The Troublemaker Next Door

By: Marie Harte
Narrated by: Anne Gray
Free with a 30-day trial

It's been the day from hell for Maddie Gardner. Instead of offering her a promotion, her boss made a pass at her. After she quit, she got dumped by her lukewarm boyfriend. And then when she's in the middle of a foul-mouthed meltdown in her kitchen, she notices her gorgeous green-eyed neighbor standing there.

Flynn McCauley never thought he'd be so cliché as to fall for the girl next door. But when he shows up to fix the sink in Maddie's apartment, he finds himself completely captivated. When a ride home turns into more, Maddie and Flynn decide to keep things strictly causal - that is, until Flynn wants more. But to get it, he'll have to convince Maddie to give him a real shot.

What listeners say about The Troublemaker Next Door

This one could not hold my attention.

There was really nothing here. The narrator's voice did not change at all between characters, this made it very difficult to follow. To me the story was flat, there was A LOT of eye rolling (and not in a good way) sex but not much else. Maybe the book would be better but doubtful. I realized while trying to listen that I'm spoiled by the level of talent found in so much of the narration these days. My advice on this one is to save that credit.

Cute and Funny with some awesome sexy times. I think I responded to it because I identify with Maddie. Though I knew who my father was, I had no relationship with him. My mother did the same thing not getting child support, so growing up was a bit of a struggle. I've never trusted men and its hard for me to ask for help from anyone, just like Maddie.

Though Maddie found a great guy in Colin, I've yet to find someone great.

I do wish the audio was with both male and female voices.

Entertaining read but some of the 'dirty talk' is pretty bad... as in silly! The stamina, if she can figure out how to bottle and sell it would make Marie a Billionaire!

I instantly fell in love with this author via this book. The story is sweet and happy - although the cousin gets on my damn nerves starting from page one. After I completed this book, I instantly went to the next one in the series. This is a good / lite read with a HEA and some LOL moments.

Started out great and by about 1/3 of the way in, I wondered what else the next 6 hours were going to be about. Turns out it was just a lot of Maddie being annoyingly contradictory, oblivious, and just straight up irritating. She gets so angry at him when he “flirts” with a candy shop or ice cream server, and when he gets mad at her when he catches her in a conversation of her ex boyfriend begging her back, she flips out and demands to know how he thinks he “owns” her. She keeps thinking how great things with him are, and how much she enjoys sex with him, and how they are definitely not in a relationship bc then things would be ruined (no real support for this in her head, which just makes her seem like an idiot). Because this goes on for so long, you start to think there’s something wrong with Flynn because why would he keep it up? It kind of just seems like he wants in her pussy only (and not ass because it’s too much work for him??). And it’s somewhat disturbing that he keeps thinking of her as “the woman”, which is what his dad calls his mom. I suppose it’s supposed to be cute but it’s a bit too oedipal. I would have rated this five, if it were half the length, the amount of time it takes Flynn to fall in love and like five chapters less of Maddie’s ridiculous and unnecessary angst. As it was, it took way too long to get to the end. I think Marie Harte’s Triggerman and Wicked Warren series are much better, and about half the length of these McCauley series. Recommend Wicked Warren over this series, as they seem very similar, the family dynamic and the love able charming heros with heroines who have low self worth.

Maddie was pathetic. I tried to like her but she was just to stupid for words.

The characters were well-written. The story was a standard trope but was still engaging. Many sizzling hot scenes. The voice acting was good.

The narrator was quite great but you need to change the speed to 1.35x at least to be more enjoyable because at normal speed of 1.0x it's kinda draggy and story wise, it's cliche but i had fun with the way the story was written and the things i can learnt from the character personality flaws.

5 Googley Eyed Frogs Out Of 5!

This is #01 in the McCauley Brothers Series. HEA with a continuing storyline. I recommend reading these in order, because if you listen to one out of order, you will want to go back and start from the beginning anyway. There are 4 brothers, 3 neighbors, and a bonus heroine with tattoos. They are all so intertwined that its practically impossible to separate them. Content Advisory: Steam factor on this one is HOT, including lots of dirty talk and sexting! And despite efforts to not curse in front of the kid, there is still lots of cursing. At the time of this posting, this Audiobook is currently available as part of the Audible Romance Package. This is the first in the series, but with the exception of a mystery heroine, all players are introduced in this book. The 3 heroines are renting a house from the 4 hero’s parents, which also happens to be next door neighbors to Mike (Hero #4) and his son. 😉 We start with Flynn“not Rider“ McCauley and Maddie Gardner. Seriously, I can’t help but see another famous Flynn talking about his smolder when I hear his character: Flynn and his brothers own/run a remodeling/refurbishing business, ⁉, from what I can tell. I’m still not quite clear what the company is, but it didn’t distract from the story. They all have their own area of interests which is the most important thing here. Flynn is the Plumber, which is how he first meets the neighbors. He gets to see Maddie’s fiery temper in all its glory, and he is entranced. Maddie Gardner is a slightly delusional, determined dreamer. Watching her mother struggle as a young single parent has really done a number to her mind. Now the constant wining to “take no charity“ made me want to slap her, shake her, or angrily hug her. I can understand some of her proclivities, but others are just down right stupid. Accepting discounts or referrals is not charity, it’s helping hands. The epilogue is mostly a set-up for book #2, Brody and Abby. Some may not like that, but it was ok to me since this series is a continuing story line and each leads right into the next. Overall this hits all the marks. Hot sex, ✔check, naughty dirty talk, ✔check, clever banter, ✔check, witty humor, ✔check. Plus the secondary characters were fantastic. Mike’s son Colin truly steals the show. Marie Harte has created some great characters. The world building is informative without being overwhelming. This is my first by her and I hope to listen to the rest of the series. This was also my first listen by Anne Gray. She had a pleasant voice that flowed well. Characters were easier to tell apart when the group was all same gender, but I struggled to do so when in mixed company. Helps to have the ebook if you are struggling with the larger scenes. The recording was exactly as it should be. Pacing/timing was accurate. No background noises. Sound levels were correct with no need for constant volume changes.