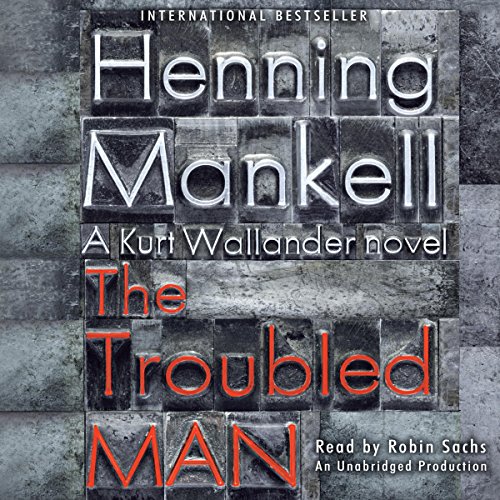 Håkan von Enke, a retired naval officer, disappears during a walk in a forest near Stockholm. Wallander is not officially involved in the investigation, but he is personally affected—von Enke is his daughter’s father-in-law—and Wallander is soon interfering in matters that are not his responsibility. He is confounded by the information he uncovers, which hints at elaborate Cold War espionage.

Wallander is also haunted by his own past and desperate to live up to the hope that a new granddaughter represents, and will soon come face-to-face with his most intractable adversary—himself.

Suspenseful, darkly atmospheric, psychologically gripping, The Troubled Man is certain to be celebrated by readers, listeners, and critics alike.

What listeners say about The Troubled Man

"Somebody is not telling me the truth ..."

Scandinavian gloom reaches its fascinating apogee with this series of detective novels by Henning Mankell, of which The Troubled Man would appear to be the last. Kurt Wallender, the middle-aged police detective and anti-hero of the series, is a divorced, lonely, rather unhappy man, who happens to have a real talent for sniffing out the truth behind complicated criminal cases. Two television series (one English, starring Kenneth Branagh, and the other Swedish which is far more authentic if you can get your head around Swedish with subtitles - I swear you begin to understand the language more and more!) have been made about these books. The stories are centred around the town of Ystad on the southern tip of Sweden and the characters always seem to be hopping over to nearby Copenhagen for some R&R, possibly for relief from the rather earnest nature of rural Sweden. The plots are interesting because they bring in issues such as refugee-smuggling and the sometimes difficult relations between Sweden and its Baltic neighbours. The country's neutral role during WWII and it's ambivalent relationship to NATO also come under inspection. Wallender has a daughter Linda who has become involved with a young financier (working in Copenhagen, naturally!) whose parents suddenly disappear one after the other. The father was a former naval officer and submarine commander who was concerned with several (actual) Soviet submarine incursions into Swedish territorial waters during the early 1980s. There is more than a hint of political intrigue tying in to the pro-American attitudes of the Swedish military and its open distaste for the Social Democrat prime minister Olof Palme, who was assassinated on a Stockholm street in 1986, a crime which has never been solved to this day. Wallender, plagued by his failed marriage, dental problems, and his growing fear of death as he passes the 60 mark finds himself leaving his dog with his neighbours more and more ("Are you sure you don't want to sell him?") as he travels to Riga, Berlin and various parts of Sweden in an attempt to unravel the puzzle. There are times when one feels like giving him a good swift kick but his obduracy and dogged unrelenting approach to the problem elicit reluctant admiration. What really happened? Read (or listen to) the book!

I'd expect nothing less...

A troubled, troubling, stirring, well-wrought end to the Wallander cycle that has me wanting to read and listen to all of them again. I discovered this author on Audible and have savored each book. In this last novel, Mankell has succeeded in what so few authors seem to be capable of, closing his series subtly, beautifully, remaining true to his characters and yet also exploring his terrain with wonderful intuition and character insights, keeping the book moving with compelling twists and turns. Mankell has turned the book, Wallander, and the reader all on their heads and has the reader/listerner looking at everything within (the pages, the plot, the life) in a new way-- sad and glorious. How I will miss Wallander, and how grateful I am that I met him and his creator!

Why do I read these?

Kurt Wallander is a gloomy man and the books are as much about what is going on in his head as they are detective fiction. This one finds Kurt more disturbed and disturbing than usual brooding about his advanced age of 60 and his impending death as a result. As a 68 year old I kept wanting to remind him as his doctor did that 60 is not the end of life! Still, I like the novels and also the BBC series based on the character which captures the spirit of the man as portrayed in these books. The biggest downer of this particular novel is that I suspect that it is the last in the series. Certainly if you have not listened to any of the Wallander novels before, do NOT start with this one.

A final thought. Although the narator Robin Sachs did a fine job and I would not hesitate to listen to other books he reads, I do not agree with the criticism of Dick Hill in this regard. Foreign books do not have to be read with foreign accents and in fact, that can sometimes make then more difficult to follow.

A Must Read for male Boomers

Well written. Probably the best of the series (I've read them all). At last, a great narrator. Male Boomers: you are not alone. Walk and ponder with Kurt Wallander. It is an illuminating stroll.

Fine finish to this character

I am a fan of Henning Mankell's books, particularly the Kurt Wallander Mysteries. This story is a fine finish. The evolvement of this character is what makes the series so dear. Sad to finish, but a good read. Would be better to read earlier books first.

I have so enjoyed Kurt Wallander books over the years. I was ecstatic that a new book in the series came out. How disappointed I am, however.
The narrator was good - no issues there.
The plot was trudging and dull. Kurt was so moody and sad. The book to me was an empty shell, with sadness within.
I really wish that Mr. Mankell had not even written this because it is the end of the Kurt Wallander books, and he left us with a pit in our stomachs about Kurt.
No excitement; no real detective work; no hope; no thrills.
I would recommend this book only if you feel that you must know what happens to Kurt so that you can have closure on the series. If you don't need this closure, let the old Kurt live in your memories.
Uggh. What a bummer.

A fairly typical Wallander story - except for the end which was not satisfactory and a surprising treatment by the author of his long standing, key character.

Great detective plot, which kept one guessing nicely, but the backdrop of the slowly declining detective which starts early and is relentless is very grinding. The author clearly wanted to get a message across. The book needed editing. We don't need to know the dogs every movement or mood, or every cup of coffee (that's common to many of the Scandinavian detective series it seems!).

I love this author but this book was a total downer. The story of a loner who had purposely isolated himself from friends etc. Lives on the tip of a peninsula in Norway, where he is only guy on the mailman's route. VERY slow moving. Pulling teeth.

Mankell is a master at painting the picture, but the subject of this picture is a big yawner

A Bilt of A Downer

First of all I would like to say that I just read online that the actor who narrated this book just died in Feb., 2013. I don't want to trash him, just say that he was not appropriate to narrate a Kurt Wallander book. Other Audible reviewers complained about Dick Hill's narration of previous Wallander books, but I say just wait till you listen to this guy. ( I liked Dick Hill's narration.) This guy has a very highbrow English accent with no expression except anger. Kurt can be short with people but he has a huge heart. This did not come through with this reader. Too bad Kenneth Branagh didn't narrate this book. He does such an excellent job in the PBS dramas of these Henning Mankell books. He's not to bad to look at either.

The book itself is sad because Kurt is toward the end of his career and is definitely feeling his age. He thinks more about dying than living, but then he always specialized in melancholy. As always, I appreciate how well these books are written. This one seemed to drag, but I honestly think it is because I was used to Dick Hill's voice narrating, and this narrator was very boring to listen to.

I do think that the translation is better in this book than in the previous ones. It flows better and the wording was more intelligent and creative. It was more professionally done, not so much like a high school student had done the translating.

If given the choice you may want to read this one, not listen to it, particularly if you liked the previous narrations. If you have listened to or read the other books in the series you should not leave this one out, but don't begin the series with this book.