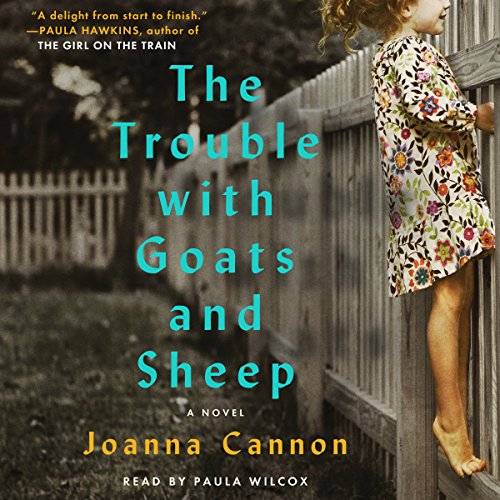 The Trouble with Goats and Sheep

By: Joanna Cannon
Narrated by: Paula Wilcox
Try for $0.00

Part coming-of-age novel, part mystery, The Trouble with Goats and Sheep is a quirky and utterly charming debut about a community in need of absolution and two girls learning what it means to belong.

England, 1976. Mrs. Creasy is missing, and the Avenue is alive with whispers. The neighbors blame her sudden disappearance on the heat wave, but 10-year-olds Grace and Tilly aren't convinced. As the summer shimmers endlessly on, the girls decide to take matters into their own hands. Inspired by the local vicar, they go looking for God - they believe that if they find him they might also find Mrs. Creasy and bring her home.

Spunky, spirited Grace and frail, nervous Tilly go door to door in search of clues. As the cul-de-sac starts giving up its secrets, the amateur detectives uncover much more than they could have imagined. Instead of finding their missing neighbor, they must try to make sense of what they've seen and heard, and a complicated history of deception begins to emerge. Everyone on the Avenue has something to hide, a reason for not fitting in. It's only in the suffocating heat of the summer that the ability to guard these differences becomes impossible.

Along with the parched lawns and the melting pavement, the lives of all the neighbors begin to deconstruct. What the girls don't realize is that the lies told to conceal what happened one fateful day about a decade ago are the same ones Mrs. Creasy was beginning to peel back just before she disappeared.

For fans of Jeannette Walls' The Silver Star, this "is a gripping debut about the secrets behind every door" (Rachel Joyce, author of The Unlikely Pilgrimage of Harold Fry).

What listeners say about The Trouble with Goats and Sheep

This book is excellent, a brilliant audio performance. I enjoyed the writing and slow reveals throughout the story.

However, the ending felt very wrong to me, so I got a copy of the printed version and realized that a key section of the last chapter was missing from the audio version. I’m wondering if I need to read the entire print version in case something else is missing.

I hope Audible can mitigate problems with the audio version as it does an otherwise fantastic book a great disservice.

Love the creativity of Cannon and her ability to describe, using common language and her sprightly turn of phrase. Was surprised at and sometimes confused by the differences in this well-done reading and the written pages.

This is another great example of the difficulties and pitfalls of categorizing books by target age groups and genres. Plunking this book neatly into the teens section is too limiting and confusing. In reality the book is a pot-boiler of neighborhood and family relationships, strife, exclusion and connection. The title refers to a sermon preached by the local vicar about dividing people into groups of those viewed as good or those thought to be bad....or in this case goats or sheep. The key word in understanding the title is the word trouble or really the difficulty in applying labels and dividing people.

Cannon beautifully plays out a community in turmoil with wonderful character studies and a gradual exposure of the shades of gray in life and in people. The storytelling moves between the summer of 1976 and back about ten years earlier to a disaster that occurred in the community. Little by little the reader comes to know the characters and finds that all is not always as it seems. We see that much of life is made up of preconceived judgements or arbitrary likes or dislikes--whether you prefer sheep or goats.

The writing was subtle and at times spare which captured the mysteries of this multilayered story. Wilcox's narration was excellent. She brought such a wide range of people to life that I was amazed by her skill.

Be aware that while we see much of the action in this book through the eyes of two young girls this really isn't a book for or about what the children see or understand. Cannon delves deeply into what makes some people fit in or belong to a group and what excludes others. It's about connection and the things that divide us.

I read several very positive reviews for this book in the US newspapers and on two UK book sites. I'm really glad that I ignored the teen genre here on audible and went with the reviews. While parts of the story are disturbing it really made me think and transported me back to London in the 1970's.

I just spent, or really wasted almost 14 hours listening to the tedious and repetitive thriller The Woman in The Window. Whether Cannon intended it or not she has captured a thriller in the every day life of a community. If you really think about it, this story was terrifying.

laughed til I cried, cried til I laughed...

It is all about the drain pipe and the custard creams. God is everywhere according to Grace.

I can't even express how many times I laughed out loud while listening to this book -- not because it was funny -- but because I was delighted with the word-smithing that I was experiencing! What a quirky and delightful writing style!

Wonderful and lyrical.... and beautifully read..
I have already recommended to friends who do audible as well as bought the hardcover for friends who don't.

I kept falling asleep during the first few chapters and had a hard time keeping the cast of characters straight. The writer can turn a lovely phrase, but there are so many writerly tricks that they all feel a bit contrived after awhile. This is one of those books with a moral message that the author is so desperate for you to get that she repeatedly batters you over the head with it. The effect is about as subtle as a jackhammer.

The end left me so confused that I had to resort to GoodReads to see if others were as confused as I was (they were). I don’t mind endings that leave something to the imagination, but this one 1) seemed to open a new question entirely that couldn’t be answered by information already given, and 2) hinged on a detail that appeared entirely unbelievable to me.

The author paints beautifully detailed pictures of people’s private lives and how carefully hidden secrets morph into behaviors (she is a psychiatrist after all), but when portraying casual racism after an Indian family moves in, is so heavy-handed as to be cringe-inducing. And the event that appears to briefly bring everyone together was quite ridiculous. I am willing to suspend my disbelief only so far.

The narrator did a wonderful job, and while this book had its charming moments, there were too many other moments that left me scratching my head and thinking “whuuuut?”

The writing is lovely. It carries you along and fills you up, and I was sad when it was over, because I wanted it to keep going. I wasn't ready to say goodbye to the story or the characters.

The narrator is quite good for this book.

I really liked this book a lot. Joanna Cannon is adept at showing you what you need to know through visuals and conversation. She respects her readers intelligence and lets them infer meaning in situations and understanding of her characters without coming right out and saying that so-and-so has this issue and so-and-so is more adept at this.... It is lovely to read a book like that. I love when things dawn on me by reading into and not being told.

This book is filled with quirky characters, misunderstandings, a mystery of sorts and two little girls who are naive and yet intelligent beyond their years in ways that most children probably are, but as adults we forget we were that way (I do remember it sometimes) and don't always see it in the children around us. Some of the narrative is from the point of view of one of the little girls, the rest is other characters, often of the same incident. The contrasting telling is not really so obvious always, it occurs to you as you read. It unfolds so well. I just really loved it and will definitely read more by this author.

The characters are wonderfully portrayed, intrinsically flawed beings. They navigate the difficult reality of concealing their flaws while living a close knit and authentically judgmental community. It was a great read, all around.