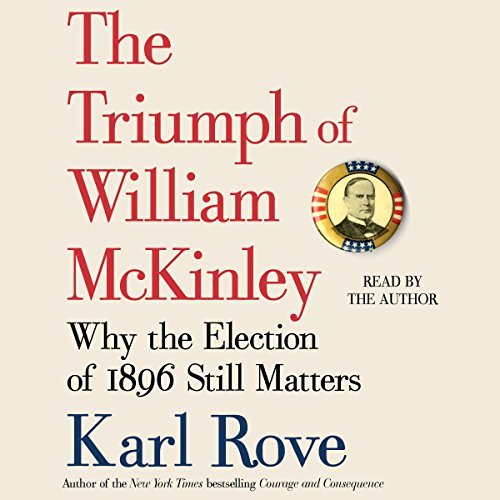 The Triumph of William McKinley

From New York Times best-selling author and political mastermind Karl Rove comes a fresh look at President William McKinley, who found a message that healed his nation, pried his party away from its bosses, and extended its reach to forge a governing majority that lasted 30 years.

Many of the changes that the country experienced in 1896 match those of today: A rising immigrant population made traditional white Protestants a shrinking share of the electorate, an economic upheaval led to rising inequality, and there was little common ground between the two parties. McKinley's campaign found answers to many of these challenges, which is why it is so relevant to what ails our politics now.

A talented politician and reserved Ohioan, McKinley (called "The Major") changed the arc of American history by running the first truly modern presidential campaign. Knowing he didn't stand a chance with the GOP's traditional base of supporters, he did the unthinkable and reached out to diverse ethnic groups, including openly seeking the endorsement of Catholic Church leaders. Running on the slogan "The Man Against the Bosses", McKinley also took on the moneymen who controlled the party by doling out favors. He even deployed what we would consider modern tactics, including microtargeting voters with the use of the latest technology. Above all, he offered bold and controversial answers to the nation's most pressing challenge: how to make a new, more global economy work for everyone. And although he alienated factions within his party and longtime allies, he won the White House.

The 1896 election is a compelling drama in its own right, but McKinley's brilliant strategies offer important and powerful lessons for both political parties today.

What listeners say about The Triumph of William McKinley

Would you listen to The Triumph of William McKinley again? Why?

Yes. This book will reward a second reading since there is a lot of new background information about 19th Century politics that explains how McKinley was elected President.

What other book might you compare The Triumph of William McKinley to and why?

Any book from the "Making of a President" series.

Readers who bring a contrary opinion about Rove to the reading of this book will not enjoy this book. I say lighten up! Rove understands how elections work and how to get a candidate elected to the highest state or national office. This book is written by one of the leading political campaign strategists today (the equal on the Democratic side is David Axelrod). Rove is not manipulating the reader; he is providing a reasonably objective account of McKinley the man, the politician and his campaigns for public office up to and including his Presidential campaign. The book is an account of how McKinley rose to the Presidency by examining the strategy of his successive campaigns. It provides a pretty good account of the competing 1896 campaigns, and explains why McKinley won. Most historians agree with Rove's conclusions about the campaign, but they cannot hope to write an account from the point of view of someone like Rove, who has actually successfully managed Presidential campaigns. Rove also explains why modern political campaigns are the active, aggressive, personal campaigns we are seeing today.

Loved the book. Really interesting story that you never hear about and it's relevant today. The narration by the author was terrific. The TR accents were hilarious and a great addition.

I have found McKinley an interesting president and have read a number of biographies about him. The topic of this book about McKinley caught my attention. But I hesitated reading it because the author was not a historian. After I thought about it, maybe the viewpoint of an expert in running political campaigns discussing running a 19th century campaign might be interesting.

The book is well written and researched. Rove does a good job of presenting both sides of the various issues of the day. Rove does provide some background about McKinley, but mostly the book is an in-depth analysis of the 1896 republican campaign. The book allowed me to look at McKinley from a slightly different viewpoint. Rove did outline why the election of 1896 still matters today. My only negative comment is about the narration; it would have been easier to listen to if done by a professional audiobook narrator.

The book is fifteen hours twelve minutes. Karl Rove did a fair narration of the book.

For History Buffs and Political Junkies

I would recommend this book to any history buff, or any political junkie. For most everyone else, it's a pretty long recap of McKinly and his life

Just as important today as it was then.

Just finished this tremendous book. I STRONGLY encourage my fellow Republicans to read it, for it is just as germane in 2016 as it was in 1896. This sentence from Rove encapsulated the message and method that President McKinley employed in his campaign:

"Politics is a game of addition, but Bryant played subtraction and McKinley took advantage of it."

Of course this is a very thinly veiled admonishment to all of us that if The Donald continues on the perilous path that he's on, we will wind up with another impeachable President Clinton.......

An interesting perspective on the turning off the 19th century

While Karl Rove comes with some partisan political credentials he certainly made an era I had known little about interesting. Not surprisingly he focuses a lot on the nuts and bolts of the campaigns organisation.

Not a very good book....falls flat!

I enjoyed Mr. Rove's Courage and Consequence very much but this one is just simply quite bad. It is rambling, unorganized, flat, and incredibly boring. It is unfortunate because the William McKinley story is an interesting one, as are the political characters of his time.

well done as only Karl Rove could do

This is really interesting and well-done history with important implications for politics in the modern world.

I really wanted to like this book. I have enjoyed Karol Rove's analysis on television and I believe he sees things from an interesting perspective.

But the history was dull, I gained no insights into McKinley as a man, and the narration--well, let's just say that the author needs to stick to his role in politics and not venture into something more suited for an actor.

I do believe the work was well-researched, but it was just not "searching" enough into the mindsets of the day or what actually made McKinley tick. I do not recommend.