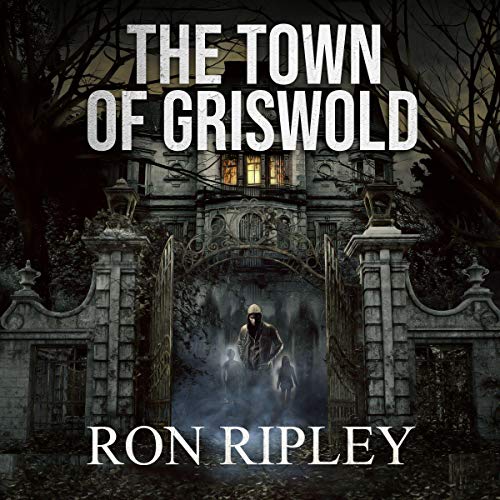 The Town of Griswold

Abel Latham is the scourge of Griswold, a deathly quiet town populated by the undead. Abel stalks the hapless victims who stumble onto his unholy ground before torturing them to death. The police rarely notice who's missing until two brothers disappear and the only clues are the boys' abandoned trucks and blood. Lots of blood.

Though shaken by the gruesome details of Abel's depraved life and dreadful crimes, Shane knows his new job is to end Latham's reign of terror and his vengeance for blood. As Shane hunts his ghostly mark, he prays he won't be the next grisly artifact found in Griswold Forest!

What listeners say about The Town of Griswold

Enjoyed it very much! No struggle to get through. A great sequel to the others in the series! Can be done as a standalone but I would recommend them in order. Great sequel with the ending for more. Keeping it spooky!

Here's me thinking that The Lighthouse was Shane's toughest job yet, but it's nothing compared to this!! Shane and his girlfriend decide to take a break by visiting an old New England town. They have heard the gossip, "The legend of Abel Latham" but decide to go see anyway. What starts out as a hike, soon becomes a matter of life and death!

This has to be the absolute baddest ghost I've read so far!! Abel Latham enjoys torturing his victims and even keeps part of them in his "lair". He let's his victims go in the woods and then huts them down. When Shane comes to Griswald, he is confronted with the ghost of a boy and his dog. They explain who Abel is and that there is no escape. The town is not only home to Abel, but also to his many, many victims.

Ron Ripley has never failed to deliver anything other than an incredibly scary and addicting read. This one is a lot bloodier, a lot messier, a lot scarier and a lot sadder than the previous two. Shane has to deal with an egotistical and insane ghostly serial killer, but also his two "best friends". I really thought that Shane wasn't going to come out on top this time, and truth be told, he doesn't, but I'm not going to say in what way because it's a spoiler ;)

In all, this was such a scary read. It gave me plenty of chills and spooked me a lot. The plot was well done and well written and I devoured the book. I loved how the author made a reference to his other series too, (which I really need to catch up on because it seems like something major happened in it!!) . Anyway, a suspenseful, creepy, fast paced and exciting read, this series is a must read!! I can't wait to see what this author comes up with next.

Again, Thom Bowers brings this book to life. He really brings the atmosphere and spookiness alive and knows how to tell the story properly. I highly recommend you check him out.

*I received this for free but voluntarily reviewed it. This in no way affected nor influenced my thoughts.*

Another interesting and entertaining story featuring Shane Ryan, a retired marine who can communicate with the dead. This time, Shane and his girlfriend Courtney are out on a relaxing day trip to hike around the abandoned town of Griswold. But as so often happens, it's wrong place wrong time, and they get pulled in to the horrific events that unfold.

I really feel like this story gives Shane's character a little more depth, and it builds on the new relationship that started after his and Courtney's ordeal at the lighthouse. We also get to see more interaction with his house, which I think of as a main character because it's so fascinating! Highly recommend this series and all Ron Ripley's books!

this was a good book. on to the next. can imagine as listening and working

This book was better than the previous. A very good series thus far. This story definitely had some sadder undertones than the previous ones, but it just made the story richer as it unfolded. Looking forward to more in this series, and from the author!

What did you love best about The Town of Griswold?

The story and suspense

Have you listened to any of Thom Bowers’s other performances before? How does this one compare?

Yes, with each book he gets better and better.

Terror waits in the town of Griswold

Each book in this series is good. As it continues, it keeps its strengths and leaves its weaknesses, though I don't really think it had much in the way of weakness to begin with. The narrator seemed to have had some difficulty with certain accents before. He definitely doesn't have them here. Of course, the only one that's continued over is German but he's got that one nailed down very well now. There was even a shocker scene in there at one point. I expected part of it but didn't expect how that scene ended. Wow! Very good book.

Ron Ripley is an automatic buy for me. I recommend these books to everyone horror fan I know.

This is my all-time favorite scare street book. The villain in this book is made for nightmares. Even if you do not find yourself familiar with the Berkeley St., Siri you can still read this book and scream with the best of us. Get acquainted with Abe and let him board your nightmares as he does mine. I highly recommend this book and I mean highly recommend it! I gave this book 5 stars and would give it a special mention but that is not how they write books on audible LOL! This book is so great!

be prepared to meet evil...Shane goes on a hike with new love interest Courtney to get away only to find themselves in the middle of haunted town central....things go bad to horribly bad fast. the story is fast paced where we still hear from characters both living and not from the beginning...we learn that if you hurt Shane, you better stay away from the house. we do lose someone to shame and now I wonder what that will do to his head going forward. starting the next audio now and cannot wait. another great story.

When imagining the killer in this book, I think of the beast, the man in Teen Wolf series. I laughed, cried and was surprised at some of the things that happened in this story, but I am hooked I can't wait to see what Shane faces next!

If you are into horror this fits the bill, a really nasty ghost haunts the village and it's quite a fight to get rid of.