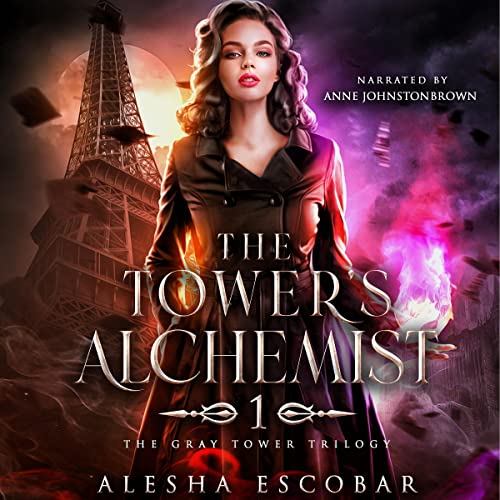 By: Alesha Escobar
Narrated by: Anne Johnstonbrown
Try for $0.00

The Nazis have unleashed occult forces throughout Europe and the Allies are forced to recruit and employ wizards to counter their attacks.

Among them is the battle weary spy, Isabella George, a Gray Tower dropout trained in Alchemy. Longing for retirement and a life of peace, she accepts one final job - extract a deadly warlock from Nazi occupied France and prevent him from unleashing an alchemical weapon that will devour the continent.

But France is crawling with the cruenti: vampiric warlocks who feed off other wizards. When things don't go according to plan, one cruenti sets his deadly eyes on her.

Betrayal is everywhere. Even some of her closest allies cannot be fully trusted. Worse still, she finds, she can't even trust herself. She becomes a woman torn between her charismatic spy lover who offers her what she desires most, one of her closest confidants whose soft seductive eyes hold deadly secrets about her past, and the Gray Tower itself.

Plans within plans. Plots versus counter plots. Heists gone wrong, sword-wielding Catholic priests, and the greatest manipulation of history that has ever been seen - these are just a taste of what Isabella George is in for in her final mission.

What listeners say about The Tower's Alchemist

I don't know what to say! Sometimes I felt confused, other times I liked the story.

What did you love best about The Tower's Alchemist?

Have you listened to any of Anne Johnstonbrown’s other performances before? How does this one compare?

This is the first time I've listened to Anne's performance; I found her very easy to listen to; enjoyed her voice and performance very much

A twist on history

I have been looking for a book to keep me wanting to hear more for a while. This was definitely it, enjoyed very minute of the story, and can't wait for the next one.

Setting during the Second World War not my usual novel setting, but the magic was interesting so captivated me. Look forward to the next in the series. Have not heard this reader before did a good job.