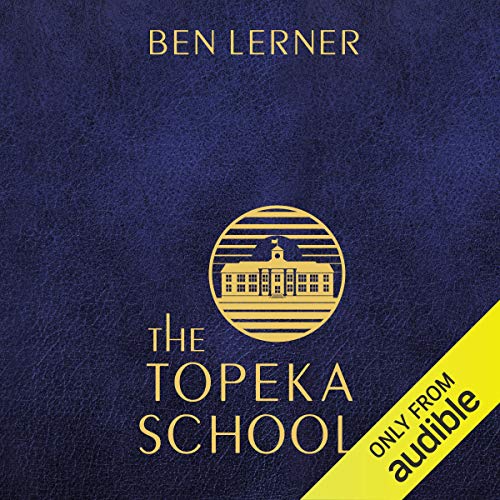 From the award-winning author of 10:04 and Leaving the Atocha Station, a tender and expansive family drama set in the American Midwest at the turn of the century: a tale of adolescence, transgression and the conditions that have given rise to the trolls and tyrants of the new right.

Adam Gordon is a senior at Topeka High School, class of 1997. His mother, Jane, is a famous feminist author; his father, Jonathan, is an expert at getting 'lost boys' to open up. They both work at the Foundation, a well-known psychiatric clinic that has attracted staff and patients from around the world. Adam is a renowned debater and orator, expected to win a national championship before he heads to college. He is an aspiring poet. He is--although it requires a great deal of posturing, weight lifting, and creatine supplements - one of the cool kids, passing himself off as a 'real man', ready to fight or (better) freestyle about fighting if it keeps his peers from thinking of him as weak. Adam is also one of the seniors who brings the loner Darren Eberheart - who is, unbeknownst to Adam, his father's patient - into the social scene, with disastrous effects.

Deftly shifting perspectives and time periods, Ben Lerner's The Topeka School is the story of a family's struggles and strengths: Jane's reckoning with the legacy of an abusive father, Jonathan's marital transgressions, the challenge of raising a good son in a culture of toxic masculinity. It is also a riveting prehistory of the present: the collapse of public speech, the trolls and tyrants of the new right, and the ongoing crisis of identity among white men.

What listeners say about The Topeka School

One of the better semi-autobiographical bitdungsroman written recently. Excellent use of flowing prose and sentiment.

Not for me. 20% of the way through and I’ve almost zero idea what is going on.

I struggled at a certain point midway in this book. A female reader based in Europe primarily I was left wondering how much of men of my generation in the US the author’s perspective represents and I just cannot stop thinking about this. If he represented a lot of middle America, and the story really is very ‘everybody could relate’ ordinary experiences , then why are we in this( global) mess? How can these relatable experiences result in us having such polarised opinions. Or does he really speak for more than I dare hope? I think this would make an excellent book for a reading group. As a female reader it’s both got some relatable content but also some very empathetic content towards the Modern man. I think it’s subtle presentation made it feel mundane but it’s aftermath has left be thinking more and more of how we should be talking about this book - and learning from it.

What was that about?

I genuinely have no idea what I've just listened to. Pretentious nonsense and rambling.

I had to give up on this about an hour and a half in. The readers sound so robotic that I found it unbelievably difficult to follow. It’s edited in such a way that the story feels inaccessible. I have the story a neutral 3 stars because I don’t know whether I like it or not. The story itself sounds promising, so I’ll be ordering the book and reading a physical copy.